Lukyanov: Russian-Turkish relations to be tense 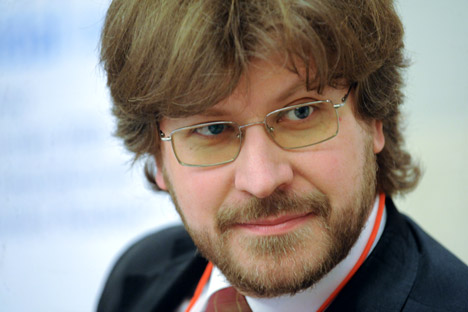 Fyodor Lukyanov: “After the incident, relations between Turkey and Russia will be tense.” Source: RIA Novosti / Sergey Pyatakov

Last week Turkish Air Force fighter jets intercepted an Airbus A-320 on its way from Moscow to Damascus which fuelled the tensions between Russian and Turkey. Fyodor Lukyanov, editor-in-chief of Russia in Global Politics, discussed the situation with Kommersant FM.

On Oct. 10, Turkish Air Force fighter jets intercepted an Airbus A-320 on its way from Moscow to Damascus. The Airbus was forced to land en route, due to suspicions that it was transporting illegal cargo. A subsequent search of the plane revealed communications equipment, radios, and jammers, which were then impounded.

Russian Foreign Ministry spokesman Alexander Lukashevich stated that Turkey had threatened the lives of Russian citizens on board the Syrian aircraft. The Ministry has demanded an explanation as to why the liner was detained. Fyodor Lukyanov, editor-in-chief of Russia in Global Politics, discussed the situation in an interview with Margarita Polyanskaya of Kommersant FM.

Kommersant FM:Do you have accurate information as to whether or not there was military equipment on board the Syrian aircraft?

Fyodor Lukyanov: No, who on Earth could know that? According to Turkey, there was. The Russian authorities have yet to issue a precise statement, but I do not rule out the possibility that something might have been on board. Incidents involving the interception of a civilian airliner are generally quite serious. Therefore, it is risky to try to force a landing if the action is not backed with firm evidence.

Kommersant FM:Did the Turkish Air Force have the right to stop and search the aircraft?

F.L.: No. Because even if they suspected that there was cargo bound for Syria, the country is not subject to any internationally recognized sanctions. I don’t mean ones unilaterally imposed by the EU or the United States, but, specifically, internationally recognized sanctions approved by the Security Council. Therefore, strictly speaking, there was no legal basis for it – a fact Russia will undoubtedly cite.

Kommersant FM:How will relations now develop between the countries: between Turkey and Syria, and Turkey and Russia?

F.L.: Between Turkey and Russia, I think relations will be tense. It all depends on whether or not they feel inclined to aggravate the conflict. My gut feeling is that they don’t. Turkey has interests in Russia. And, until quite recently, it seemed that their disparate views on Syria were not impacting Russian-Turkish relations, and that the two sides were somehow able to compartmentalize the issue.

But now the situation has, regrettably, changed. And this is mainly due to the fact that Turkey has become deeply embroiled in Syria’s internal affairs. The problem is no longer regional, but strictly Turkish. I say that because the frontier areas along the Turkish border are, in fact, controlled not by the Syrian government but by the Kurdistan Workers’ Party (PKK). It’s not just a red flag, but a genuine threat, because it could be become an outpost for Turkey’s fiercest enemies.