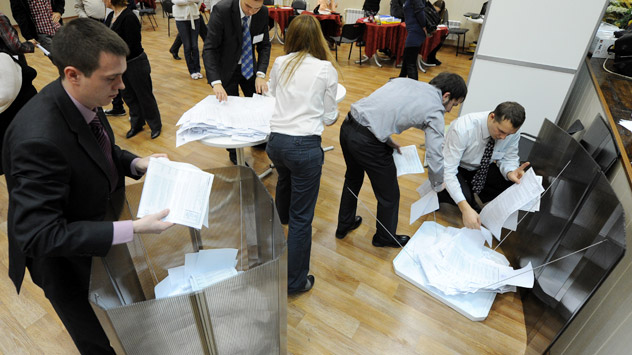 Russia saw 4,814 elections of varying levels as part of the single voting day on Sunday. According to the Central Elections Commission (CEC), they involved over 22 million people or one-fifth of registered voters in Russia.

Russia saw 4,814 elections of varying levels as part of the single voting day on Sunday. According to the Central Elections Commission (CEC), they involved over 22 million people or one-fifth of registered voters in Russia.

Judging by early reports United Russia holds a steady lead in many parts of the country. With 94.78 percent of the ballots tabbed in the Saratov regional Duma election, United Russia has 78.01 percent of the vote, Interfax was told at the regional election commission. The other party that has chances to win seats in the local legislature - the Communist Party - took 8.09 percent. Other parties have failed to overcome the 7 percet barrier so far.

Over 99 percent of ballots have been counted in the Tver city Duma election and so far United Russia holds the lead with 41.3 percent of the vote, Interfax was told at the regional election commission. "The Communist Party and A Just Russia also made it for the Tver parliament by party ticket with 18.72 percent and 17.82 percent of the vote respectively," a commission spokesman said. He said the other parties failed to overcome the 5 percent barrier: Yabloko got 4.77 percent, the Liberal Democratic Party - 4.03 percent, Greens - 3.83 percent, and Patriots of Russia - 2.01 percent.

"Early reports also indicate that representatives of United Russia won in all 16 single-mandate constituencies in Tver," the official added.

United Russia holds the lead in the absolute majority of electoral districts in Tuva and in most municipal elections in The Arkhangelsk Region, according to the press service of the regional elections commission reports.

Meanwhile, Demyanovo, The Kirov Region, that was the scene of a conflict between local residents and newcomers from Dagestan last summer elected its new head.

"With 100 percent of the ballots counted, independent candidate Vasili Trufanov holds the lead," Interfax was told at the regional election commission on Monday. Trufanov reaped 52.61 percent of the votes. "Three of his rivals were representatives of United Russia and the Liberal Democratic Party and one more independent candidate. The former head of the local administration Andrei Tretyakov, who resigned after the conflict in summer, was also nominated but dropped out of the race a week later," an election official said.

No less attention was paid to the situation in the Bryansk region where the Communist party candidate was believed to have good chances of becoming governor.

Nevertheless, with 100 percent of the ballots counted, Nikolai Denin (United Russia) is winning, head of the regional election commission Igor Kaplunov stated in his report to the Central Elections Commission on Monday. He said the turnout in the election exceeded 47 percent. Denin collected 65.22 percent of the vote and Communist party candidate Vadim Potomsky - 30.83 percent.Kaplunov noted that the gubernatorial election took place in a generally calm atmosphere.

Russia's political pundits relate the United Russia's lead to the lack of unity among the opposition and increasing consolidation of elites around the ruling party. Vice President of the Center for Political Technologies Alexei Makarkin told Interfax that United Russia's lead in gubernatorial and regional parliamentary elections derives from consolidation of certain elites around the ruling party and apathy of opposition voters caused by the absence of a valid alternative.

"The elites are extremely cautious, and the ruling party manages to consolidate them around itself," he said. "Besides, United Russia has a rather disciplined and organized electorate. Voters are not very active, which creates a sort of regularity - the less active the voters, the better it is for the ruling party," he said.

In spite of substantial electoral support, the Russian Communist Party is gradually losing its influence, the expert added. "On one hand, the Communists have a rather stable ideological electorate," he Makarkin said. "On the other hand, the size of this electorate is shrinking due to natural causes. Anyway, it is smaller than the electorate of the ruling party. In addition, the Communist Party electorate is being washed out with the appearance of new communist parties, although this effect is insignificant as yet."

The expert explained the basically low activity of voters in regional elections with the fact that "voters do not view parties, which define themselves as the opposition, as a valid political alternative."

Earlier, Russian Prime Minister Dmitry Medvedev has said that the expectations of those who predicted the failure of United Russia party in the local elections did not come true.

"Everyone expected the fiasco of the party after the December elections - let's frankly admit it. And not because the party did extremely poorly but everyone said that it is 'a declining trend', 'everything is getting out of hand and losing ground'. Nothing of the kind happened," he said during a conference call at the headquarters of United Russia.

Meanwhile, the leadership of United Russia party believes that the party improved its performance in the local elections compared to the State Duma election thanks to large-scale preparatory work.

"If you look at the outcome of Sunday's elections in the regions, you will see that United Russia built up support. This is the result of conducting fairly open primaries during the entire period and choosing the candidates that were elected yesterday, conducting very serious discussions with voters at open stages," Sergei Neverov, secretary of the party's general council and State Duma vice speaker, said at a press conference at the Interfax central office on Monday. "United Russia holds the lead in the cities of Cherkessk, Barnaul, Petropavlovsk-Kamchatsky, Vladivostok, Kursk, Tver and Yaroslavl. This is very important for us because in the very same cities United Russia did not win sufficient support in the election last December. We see that the attitude toward the party is changing and the party is changing its attitude to the nomination of its candidates, to participation in the campaign," Neverov said.