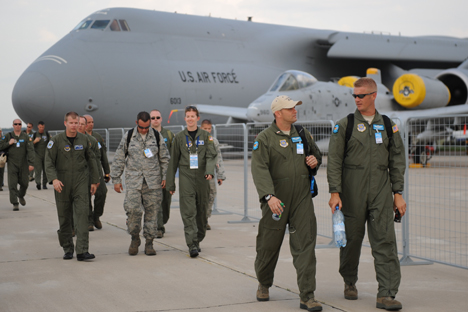 Will the US cut and run from Afghanistan? Source: ITAR-TASS

The stunning weekend editorial by the New York Times on the Afghan war anticipates President Barack Obama’s long awaited “return” to the war after the November 8 presidential elections.

That is why its glaring title “Time to Pack Up” hits the eye. Many thoughtful American commentators have already said so, but where NYT shifts the focus is by demanding that Obama should advance his withdrawal schedule and bring back the American troops by end-2013 instead of a year later, as contemplated.

The NYT is an influential daily and its most important salient is the warning that American people will not support the US plan to keep forces in Afghanistan even at reduced level beyond end-2014.

The daily says the US and its allies should merely stick to the $16 billion economic aid commitments through 2015 and try to fulfill the agreement to finance the Afghan army up to 2017 with $3.8 billion.

But no sophisticated weapons should be left behind – destroy them if they can’t be taken out – because they might fall into Taliban hands. The Afghan forces won’t hold together and in the best-case scenario, may hold only Kabul and other major cities while “there seems little chance of guaranteeing that the Taliban do not ‘come back in’.”

The editorial is blunt that all 3 key pillars of Obama’s strategy have collapsed: creation of an effective Afghan national army; ensuring good governance; befriending Pakistan.

Hamid Karzai figures for some sharp comments. In the NYT estimation, “he has proved himself to be not only unreliable, but a force undermining American goals and Afghans’ interests.”

The editorial suspects that Karzai may cling on to power even beyond 2014 despite the Afghan constitution forbidding him from doing that.

In two trenchant paragraphs, the editorial mauls the Obama administration for its naivety to have pinned hopes on Pakistani cooperation. It says:

“American officials say the Pakistanis may have decided that sowing chaos in Afghanistan by supporting Taliban proxies is not in their interest after all. This could be wishful thinking… Islamabad’s collusion with the Taliban and other extremist groups is the biggest threat to Afghan stability… America’s leverage with Pakistan on security matters is limited by its need for Pakistani bases, border crossings and intelligence on the Taliban.”

The NYT suggests that once the US troops are removed from Afghanistan, Washington should “hang tougher with Islamabad.” Even then, Pakistani officials “might not listen, but at least the United States could be more honest about what the Pakistanis were doing.” The NYT editorial is here.