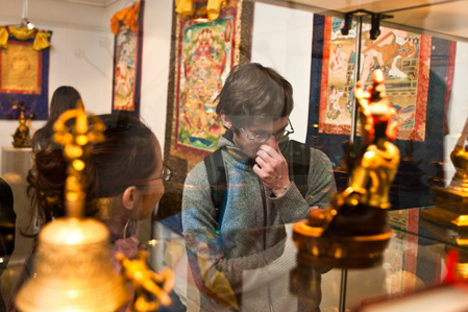 As more Russians attempt to attain nirvana, Russkiy Reporter takes a look at the way Buddhism is practiced in the country.

Buddhism in Russia has a mystical nature. There’s no Buddhism, and yet it’s there. Some talk of a revival of Buddhism, while others believe the sun is setting on it for good. Some are convinced that Buddhism is for Kalmyks, Buryats and exalted rock-stars, while others cite statistics claiming the increase in students of Buddhism around the world is due solely to the number of Russians who have turned to the faith. Our correspondent attempts to address these questions.

Buddha is with us

The teachings of Buddha were brought to Russia by the Kalmyks 400 years ago, although its status was only recognised in 1741. Since then, Buddhists have shared all the pitfalls of life in Russia. Under the Tsars, Buddhists were respected for their wisdom and peaceful nature. The Soviet administration took a different view, and the persecution of Buddhists began.

Buddhists were repressed everywhere – from the famous centres of Buddhist thought to Buryatia and Kalmykia. Buddhist temples were torn down, with most of the monks being sent to the gulags, while others were either shot or forced into hiding. By 1941, Stalin had officially declared that Buddhism was wiped out of the USSR. Yet, in 1946, a delegation of Buryat Buddhist monks who had miraculously survived went to the Kremlin with a petition to overturn the government’s decision to outlaw Buddhism. The study of Buddhism was allowed to continue, albeit on an extremely restricted basis. The first and only Soviet-era Buddhist temple was built on marshland in the village of Ivolga near Ulan-Ude.

Ideological control of Buddhist teachings was only lifted in the early 1990s, after which Buddhism spread rapidly. Today there are 47 Buddhist temples in Buryatia and the surrounding territory alone. In Kalmykia there are 27 and in Tuva there are 17. Buddhist centres are appearing across the country.

Nowadays, almost every major city in European Russia has a Buddhist centre (there are around 200 in all). Since the 1990s, temple building in the traditionally Buddhist regions of Buryatia, Kalmykia and Tuva has been intense – there are around 100 today, compared with just three 20 years ago. Could it be that Russia is a Buddhist nation?

The 2002 Census lists the numbers of Buryats at 445,000, Kalmyks as 174,000 and Tuvans at 244,000. But these numbers include atheists, shamanists and Russian Orthodox Christians... so you can’t say they are all Buddhists. There are also Buddhists amongst the ethnic Russian population. But how many? There are no figures. The majority of Russian Buddhists don’t follow the Gelug, or Yellow Hat school of Buddhism which traditionally flowered in Russia, but to other schools. The largest is Karma Kagyu, with around 300,000 followers. There are also Sakya and Nyingma schools, but their adherents barely top 10,000. There are Buddhists within the ranks of scholars of Buddhism. They rarely admit that they are Buddhists. A rough estimate puts the total number of Buddhists in Russia at around 1.5 million, or 1 percent of the population. This is not an insignificant number. But who should be counted as actual Buddhists?

All of the 17 registered Buddhist communities in Moscow are completely unique – they bear no resemblance in any way to one another. Each has its own circle, and its own style. And each one will tell you, in somewhat mincing and evasive language, that they practice authentic Buddhism, while the others don’t. In Russia, just as in a drop of water, we find the reflection of the entire Buddhist world.

Each morning at the Diamond Path Moscow Buddhist Centre begins with meditation at 8 am. There’s a sizable white room with a high ceiling that has been renovated recently – it looks just like an empty office. The only clue to the activities is a lonely gilded Buddha by the far wall.

A girl with an immobile face is sitting on the floor. In a robotic voice she talks of freedom and happiness. The carpets are thronging with hundreds of people. The girl suggests that practitioners think of the leader of the Karma Kagyu school, the 16th Karmapa, in a golden aura. Everything should eventually dissolve into a rainbow mist, and happiness will come over you. This simple activity takes an hour. Then everyone goes to the kitchen for some tea and a chat. They are nice people; you can see it in their eyes that they are educated and are naturally inquisitive. There are no ceremonies and no penances. People don’t talk about spiritual matters. They mostly pop in after work and swiftly cleanse their consciousness... There are centres just like this in 640 cities around the world. There are 76 in Russia alone.

Followers of the Kagyu school of Buddhism came to Moscow in the early 1990s, when many people were in search of new values. They knew where to look – to the East, of course, to India or China. The funny thing is that they sought wisdom in the East, and found it in the West.

The founder of these hundreds of Buddhist centres in Russia was, in fact, a Dane by the name of Ole Nydahl. He was a hippy in his youth and did some light drugs. On a trip to Nepal, he came across Buddhist teachings and then undertook training to become a lama. Nydahl has been coming to Russia since the early 1990s. He follows the Kagyu, or Diamond Path. The task is to learn the meaning of being both fully and rapidly by overcoming the intolerable. “Scientists make simple things hard. But I make hard things simple,” says Ole.

His way of life makes heads spin and it is of little importance whether it’s Buddhism or not. This kind of bliss, which is like an old house after a major reconstruction, has no concept of nationality. It is faceless, laconic, and dry. Another by-product of globalization and another entry ticket to the big European world!

Got up, had a wash, and made an offering to the Ishta-deva protectors (pouring milk into a special bowl). During the day, you do no ill, you must not offend living things, and in the evening you read mantras. That’s how a proper Buddhist lives, an old Buryat woman explained to me in the minibus on the way to a Buddhist temple near Ulan-Ude.

The Buddhist temple looks pretty strange; like a big field with oddly shaped Russian log cabins built all over it. Everything's broken down and impoverished. But in the distance something flashes dazzlingly – the colours of the rainbow, all the colours of the world. These are the legendary temples with turned-up roof corners, dragons and lions, ribbons and flags, prayer-wheels and bells.

All of Buryatia’s Buddhist temples offer two kinds of consultations: astrological and medical. Visiting a lama is radically different from going to a Christian confession. The lama can’t just “take your problem and solve it.” Instead, he offers counsel. Whom you should marry, how to run a farm, where and what to study... This is where local Buddhism differs from its Western manifestation – it is specific, and it divides labour. While Lama Ole teaches how to raise your consciousness, the lama here gives advice on goat breeding. More than anything else, the local lamas resemble Collective Farm chairmen with degrees in philosophy.

Buddhists here don’t believe in higher spirituality. Full stomachs – that’s what brings spirituality. The hungry don’t give two hoots for God or Buddha either. It’s no surprise that the number of parishioners here has shot up by 40–50,000 at the expense of the Orthodox Church, despite the fact that the Buddhists aren’t very welcome here.

“We're not interested in the numbers of Buddhists, and we don't do missionary work,” says Damba Ayushev, head of the Buddhist community in Russia. “But the more you persecute Russians, the more they come to us.”

Russian Buddhism is attractive because it has no aspirations to world domination, takes a friendly approach to all faiths, is selfless, practical, anti-dogmatic, anti-totalitarian and doesn’t recognise any kind of paternalism – only trust and friendship. It’s a superb opportunity to break the mold of totalitarianism, change the starting point and take a radically different view of things. It makes a wonderful alternative to national pride. Buddhism’s greatest obstacle in Russia is the fact that many Russians, who look for this starting-point, don’t receive the knowledge from the hands of its original bearers but from the hands of European teachers.

Buddhism is a fine philosophy. But not the sterile European Buddhism that smells like universal cleaning fluid, protecting a practitioner from his own nationality. The essence of Buddhism lays elsewhere and is focused on uplifting people. Perhaps genuine Buddhism has come to Russia to remind people of who they are and to give them a chance to see themselves in their true light.