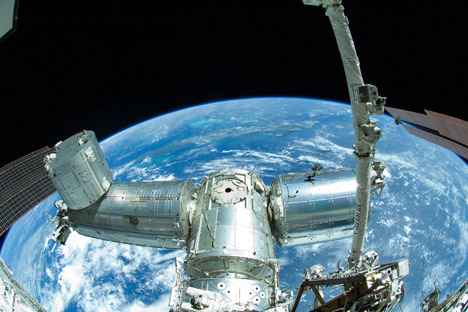 Russian and Belarus are going to develop new technologies that should make it possible to obtain quality photos of changing weather conditions on Earth from space. Source: AP

Moscow and Minsk have been actively developing cooperation in the space and high-tech sector as part of their Union State.

With the launch of its own remote Earth-sensing satellite, Belarus has for the first time been able to forego space data gathering and processing services offered by other countries. The “Monitoring SG” program, which is officially titled as “The development of space- and ground-based means for supplying customers in Russia and Belarus with Earth remote sensing data,” was approved two months ago by the Council of Ministers of the Union State. The program will cover the period 2012-2016 and should mark an important step in space exploration and use.

According to Anatoliy Komisarchuk, deputy head of the Representative Office of the Standing Committee of the Union State in Minsk, the program aims to create new operable space equipment. For example, the Monitoring SG provides for the development of new technical and hardware/software solutions for ground-based complexes to control, collect, process and distribute space data. It will also make use of the capabilities of the orbital grouping of Russian and Belarusian spacecraft.

The budget for the Monitoring SG program stands at 2.5 billion rubles ($80.4 million), which will be financed from the Union budget. The Russian Federal Space Agency and the Belarusian National Academy of Sciences will act as state customers for the program.

“The program is intended to ensure the durability and operability of spacecraft. It will also develop new technologies that will ensure the efficient functioning of equipment in outer space, so that customers can receive quality remote Earth-sensing space data,” said Sergei Koreniako, head of the Department of Joint Space Programs at the United Institute of Informatics Problems of the National Academy of Sciences of Belarus.

Plans include the development of UHF radar equipment for all-weather sensing from outer space. The new technology should make it possible to obtain quality photos of changing weather conditions on Earth from space. Since the territory of Belarus is covered with clouds for most of the year, using optical-electronic equipment to produce quality photos of the Earth’s surface is not always possible. The UHF radar equipment will allow this process to be carried out regardless of the weather.

New hyper-spectral equipment that will allow photos of the Earth’s surface to be taken in different ranges of the visible spectrum is in development. There is also a plan to produce higher-quality optical-electronic equipment for installation on small spacecraft.

Combining the efforts of Russia and Belarus in the space sector will help enhance control over the manufacturing of Russia’s space equipment. It is no secret that, after the collapse of the Soviet Union, a sizeable portion of the testing complex ended up outside Russia, with most of it finding its way to Belarus. In order to guarantee the safe operation of spacecraft components in space, it is necessary to test components in at least three laboratories. The Russian space industry lacked such capabilities until now.

As part of the “Nanotechnology SG” Union space project, laboratories in both countries have been working on developing and testing thermal shield materials for Russian and Belarusian satellites.

According to Anatoliy Komisarchuk, the main objective of the new SKIF-NEDRA program will be to assist in ensuring energy security for the Union State by creating a high-tech and innovative tool for oil and gas field services. The tool should increase the efficiency of exploration, prospecting and use of the Union State’s hydrocarbon resource potential.

This program’s budget will amount to 1.3 billion rubles ($41.8 million), while the economic impact of implementing the new technology could reach 6.5 billion rubles ($207 million) as early as in 2020.