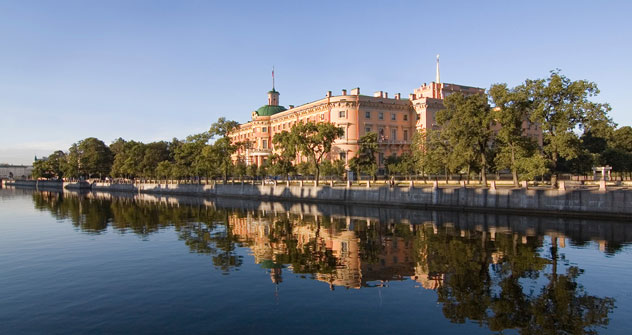 If there was a ranking of cities based on the number of legendary places per capita, St Petersburg would most likely make the top three. An RIR correspondent decided to veer off the beaten tourist track and explore the city’s less known sites.

Walking in the public gardens on Primosky Prospekt, one cannot help but hear the sounds of a prayer wheel. The place is home to the world’s most northern Buddhist temple. With some modern elements in its design, the temple was built in 1915 at the initiative of the Dalai Lama. During that time, the Dalai Lama was actively developing relations with the Russian Empire in a bid to secure the “White Tsar’s” support in case of possible British expansion.

After the Russian revolution in 1917, the Soviet Government ordered the demolition of almost all Buddhist temples in the country, but left the northern one intact. At various points in its history, the building was used as a sports base, a military radio station and a zoology laboratory. “The temple was restored to the Buddhist community after Perestroika, and when the monks started cleaning up the garden outside, they found skeletons of whales and dolphins,” the Sayan Lama says. A few years ago, he graduated from the Buryatia Buddhist Institute and came here as an apprentice. “And I’ve been here ever since. This is a very salubrious place, it brings harmony.”

Today, the temple has 7 lamas. “We have a lot of temple-goers. They may ask for a healing ritual, or request a horoscope reading. They may even ask us to perform the house cleansing ritual. Sometimes we are visited by Tibetan Lamas coming here to lecture.” The spiritual leader of the Tibetan people is considered to be official patron of the northern temple, regardless of the fact that he has only visited the temple once, in 1987.

The Tears of Socialism

Number 7 Rubinstein Street is often called St Petersburg’s most absurd building. An example of constructivist style, it was built in the 1930s, when it was widely regarded as a masterpiece of progressive Soviet architecture. The building, which housed a commune of engineers and writers, was conceived as a symbol of communal living. It was designed for its inhabitants to live as a community rather than in separate households. There were 52 flats with no kitchens or other amenities, one shower room for the entire building, a canteen and a nursery. “We even had a sun parlour on the roof where we sunbathed and played football and tennis,” said Leonid Naishtein, a resident in the building since 1946. “We wanted to lead a truly Soviet lifestyle, but the canteen ruined it: the food just wasn’t up to scratch.” In all honesty, there were other reasons residents came to dislike the building. “The acoustics were just… too good; if somebody down on the third floor was reading poetry, I could distinctly hear everything, even the bad rhymes, in my room on the fifth floor,” wrote well-known Soviet poet Olga Berggolts, one of the building’s first residents. “Such unwillingly close contact combined with incredibly small rooms the size of a doghouse were very annoying and frustrating.”

The commune eventually fell apart, and the house was nicknamed “a tear of socialism.” As its former members themselves put it, “the attempted phalanstery at 7 Rubinstein Street was a failure.”

Number 10 Pushkinskaya Street was the symbol of liberation from totalitarian rule during Perestroika when it was occupied by the city’s most famous and most radical group of squatters – informal artists who lived and worked there. They took up residence in the giant 300-flat building in 1989, when it was vacated for major renovations. The city administration repeatedly tried to kick them out, but without success, and was finally forced to grant them the right to use a third of the building free of charge. The squat gradually evolved into an art centre. “We host contemporary art exhibitions and performances, and we run a few clubs – some gentle, some more aggressive – and an experimental music club,” says the centre’s manager Anastasia Patsei. The centre’s flag flies above the entrance; the red area symbolises the totalitarian regime, while the white circles stand for free individuals creating together.

“The building now accommodates artists who live and work here,” Anastasia continues. The stairwells are decorated with residents’ artwork; the walls covered with photos reflecting the history of Russia's non-conformist movement. The window ledges are packed full of fan mail that has been sent to rock musicians living in the building. Kolya Vasin – ceramic artist, philosopher and quite possibly the most ardent Beatles fan in Russia (his office is jam-packed with Beatles memorabilia and has a scale model of the John Lennon Temple of Love, Peace and Music in the centre of the room) – has lived here ever since it was taken over by the squatters. “It is my dream to have the temple built in St Petersburg,” Kolya says. “It’s a miracle, a gift. A song. Everyone’s looking for paradise, and no one has been able to find it. I have.”

Kolya is often visited by tourists wanting to have their picture taken with him and listen to his stories of the Fab Four. He has even named a street – within the centre’s premises – after John Lennon. It’s the shortest street in town at just one arch span long. “I just took a ladder and put the street sign up. That’s all. Before that, I had visited the toponymic commission, I took the floor there and announced that the city needed a John Lennon Street.” The authorities, however, didn’t agree, so the street is purely unofficial.

The Chambers of the City’s Patroness

Around 100 people are queuing outside a little chapel in the centre of St Petersburg. The women are glad to have come on a weekday. They would likely have to wait some 10 hours to get to admire the relics of the city’s patroness, Saint Xenia the Blessed. She lived in St Petersburg at the turn of the 18th century. When she was 26, her beloved husband died. She then gave all her possessions away to the poor, dressed up in her late husband’s clothes and became a pilgrim. She answered only to her husband’s name, Andrei Petrov, and insisted he was alive, and that it was Xenia who had died. She walked around St Petersburg helping people, accepting almost no money and giving it to the poor. People in the city started to notice that whenever Xenia picked up a sick child and blessed it, the child would get well. If she took anything from a merchant’s shop, his trade would be blessed. If she entered a house, peace and harmony would descend upon it. Xenia died at the age of 71 and was buried in the Smolensky Cemetery.

The grave mound has had to be renewed a few times. Visitors to the grave often took a handful of the earth away with them, believing that it will stave off disease and bring happiness. Later, a stone slab was laid over the grave, but even that was gradually pulled apart by pilgrims. In the 19th century, a chapel was built over the grave, and thousands of people still visit it. “Every time we have a guest at my house, they usually ask to go there,” Alyona Yablokova says. “Once I had an ear infection and my mother went to the chapel to get some oil. It was said that Xenia had cured a boy with severe otitis. I don’t think it really matters what you take from that place: some dirt, oil or a candle. I first came here on a class trip when I was nine or ten years old. I can still remember my impressions from that visit: there were a lot of notes on the walls. People left notes everywhere they could, but it was considered better to leave them inside.”