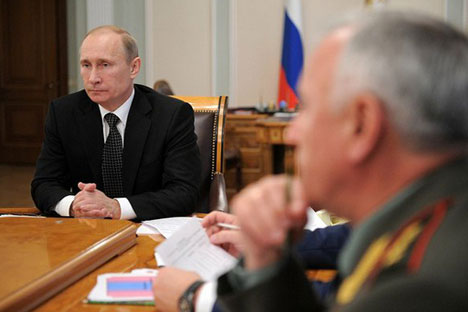 Russia and India face similar threats – religious extremism and militancy exploding into brutal terrorist acts that have a destabilizing effect and set back the national agenda of development.

The Russian President Vladimir Putin’s remarks Tuesday in Moscow on terrorism are the first of their nature in their focus and down-to-earth practical note after coming to power 5 months ago. The meeting at the Kremlin yesterday was obviously at a “working level”, related in particular to the North Caucasus and under the shadow of the forthcoming 2014 Winter Olympics in Sochi, probability of Russia hosting the G20, etc.

The striking part is the upbeat note in Putin’s assessment of the current state of play in Russia’s struggle against terrorism. He has spoken of carrying the fight to the devil’s cave on the rocky cliff where he would have retreated.

The iron will to meet the terrorist threat comes out clearly in Putin’s political idiom – “utmost decisiveness”; “relentlessly, decisively and, when necessary, aggressively, and always stay one step ahead.”

Great emphasis is put on teamwork involving security agencies and between the personnel drawn from different cadres, and “coordinated targeted military operations”. The train of thoughts sounds familiar to the Indian ear.

Which, of course, brings back the question: How dense is the India-Russia cooperation in this field? What stands out from Putin’s words is that Russia has met with creditable success – unsung and unwritten, perhaps – but won’t rest on its oars and, in fact, proposes to go for the “terrorist infrastructure”.

The point is, Russia and India face similar threat – religious extremism and militancy exploding into brutal terrorist acts that have a destabilizing effect and set back the national agenda of development. For both countries, there is an external dimension. The post-2014 scenario in Afghanistan surely lends urgency, too.

Equally, the challenges at the operational level seem similar. Putin discloses that Russian agencies have become “much more efficient”. How does that compare with India’s record? What is the “additionality” we could get through closed-door cogitations with the Russian agencies?

Maybe, I’m wrong in estimating that the old verve of the Russian-Indian working group on terrorism is lacking. Indeed, unlike the Americans, Russians don’t brag. Again, a real India-United States convergence seems to be lacking for a variety of reasons and may remain elusive. But that is not at all the case with Russia – ideologically and politically or even in terms of realpolitik.

We know we too have learnt to brag – such as the show we’ve with Saudi Arabia as our newfound partner in combating terrorism (despite that country’s consistent record of using terrorism as an instrument of state policy all over the planet – except the Arabian Pensinsula). But that is more a matter of geopolitics. Putin’s remarks are here.