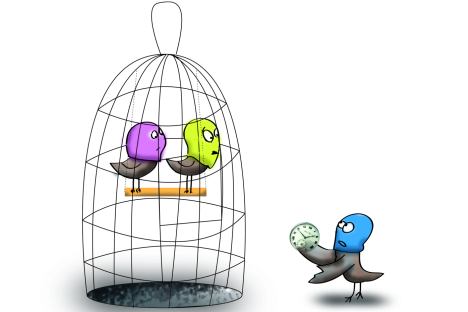 The pre-trial detension commission has once again rejected a request from the condemned Pussy Riot members to spend their prison sentence in Moscow. Dmitry Babich gives his insight on the Pussy Riot trial and why the girls failed to win in court. 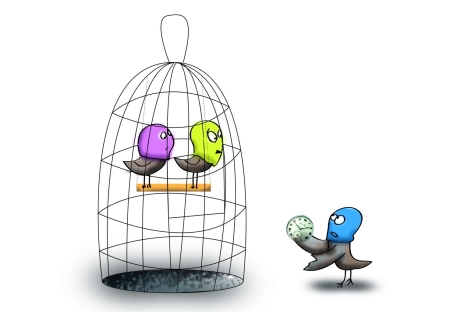 Click to enlarge the image. Drawing by Niyaz karim

The story surrounding the sentencing of two Pussy Riot members to two years in jail and the release of the third member, Yekaterina Samutsevich, has been the object of much political speculation, both in Russia and abroad

Nevertheless, there has still been little focus on the hard facts – did the women do what they were accused of doing? Did they commit an act of hooliganism? When a crime has been committed, political slogans should be laid aside. Otherwise, we risk returning to the early years of Soviet rule in Russia, when desecration of church altars, and attacks and insults against priests were justified by the aggressors' supposedly progressive views.

What happened around 11 a.m. on February 21, 2012, when members of the Pussy Riot band, together with journalists and cameramen, entered the Cathedral of Christ the Savior - the holiest of the holy in Russian Orthodox Christianity?

Pussy Riot's Nadezhda Tolokonnikova and Maria Alyokhina averted the attention of a church attendant with a question about the best way to place the candles in praise of God, while Samutsevich – now free with a suspended 2 year sentence – unsheathed her guitar and switched on equipment that played the now well-known song denouncing the head of the Russian Orthodox Church, Patriarch Kirill I (Gundyaev).

The cathedral guards, having seen Samutsevich with a guitar, understood that something wrong was going on; they stopped her from entering the altar and attempted to take the guitar from her. Meanwhile, Tolokonnikova, Alyokhina and other masked unidentified Pussy Riot members entered the altar and partially disrobed.

Samutsevich also wanted to enter the altar, but did not manage to get past by the cathedral guards. This nuance of the situation saved her from two years in a penitentiary. Samutsevich’s attorney stressed this nuance at the court hearings on the defense's appeal in October and, thus, convinced the court to commute her initial two year sentence to a suspended one.

The show in the cathedral lasted no more than 30-40 seconds, and, on the same day, a video of it appeared in the Internet with a studio-recorded soundtrack. On March 3, 2012 Tolokonnikova and Alyokhina were arrested – witnesses saw their faces in the cathedral before they put on their masks. On Mar. 16, Samutsevich was arrested as well. The other, unidentified, participants were never found and, most likely, never seriously pursued.

View the infogrphics: Religious feelings in the Russian society

The main controversy of the trial was the following: was the performance in the cathedral a political act or an act of hooliganism? The prosecution chose to indict the band members with Article 213 of the Criminal Code – “hooliganism, or a grave breach of public order expressing clear disrespect for society.”

The prosecution could have chosen article 282, which deals with extremism and actions aimed at inciting hatred toward a person or a group of people on the basis of their being part of some racial, ethnic, religious or a social community. Strictly speaking, a song wherein the patriarch of the Russian Orthodox Church is called "a b***" and “excrement of God” could be viewed as an extremist one. However, allegations of hooliganism lead to a stricter maximum punishment of seven years in prison, instead of two under the Article 282.

The tactics of the defense – as well as of the Western mainstream and Russian liberal media that nearly 100 percent sided with Pussy Riot – was to present what happened in the cathedral as a political action, not an act of hooliganism. The prosecution and Orthodox believers, on the other hand, tried to avoid any political connotations when talking about what happened on Feb. 21.

The court, if it wanted to preserve its credibility, had to stick to the essence of the accusation, excluding all politics from its verdict.

The accusation had strong cards in its hands. Participants of numerous anti-Putin rallies that had taken place in the area surrounding the cathedral, among other places, were not persecuted in any way. Dancing and yelling in motley clothes in the altar of Russia's main church no doubt hurt the feelings of a lot of Russians – Orthodox believers and others.

It has been proven that at least a part of the anti-Putin lyrics were not performed in the cathedral, but voiced over in the studio later on. Witnesses of the performance in the cathedral could not even remember the word “Putin” being uttered during the act inside the altar. This made the situation for the Pussy Riot members a lot worse – without any political context, hooliganism could indeed land them in jail.

Attempts of the defendants' attorneys to provoke the prosecution into making political statements – for example, by requesting President Putin's and Patriarch Kirill's presence at the trial – failed. The logic of the court, when it turned down that request, was the following: if hooligans, when disrupting public order somewhere, yell out political slogans and mention politicians' names, it does not mean that hooligans should not be punished and all the politicians insulted by them brought to the courtroom.

When attempts to politicize the trial failed, the last line of Pussy Riot's defense was to say that they had not known they were breaking public order and insulting believers' feelings when they entered the altar. However, this line of defense was quickly broken by numerous facts. The action taken in the cathedral was not an improvisation: it had been prepared for days, maybe weeks.

There were several journalists and a number of activists invited; they had met in the metro before the action and had been given instructions by the action's organizers. On one of the confiscated computers investigators found a video where one of the Pussy Riot's members said:

“We shall deliver our punk-prayer near the altar, because women are not allowed into that space.” Therefore, all of the talk about the “inadvertent” nature of the action was judged to be a falsehood.

“The defendants' position that their actions were inspired not by contempt for Orthodox believers and Christianity as a whole, but by some political considerations, is not backed up by facts,” the court concluded back in August and stood by in October. Tolokonnikova and Alyokhina only made their situation worse with their politicized speeches at the second trial in October. Putn's third term in office, which they denounced in court, has no relation to hooliganism.

In this case, the court did everything it could to lessen the penalty for the defendants by commuting the sentence of Samutsevich to a suspended one. Samutsevich simply did not enter the altar. Her decision to hire a less politicized attorney also worked to her benefit. And there is no place for the current talk about the state breaking the band members' “united front.”

If one of the accused did not take her offense against society to its conclusion, then it may improve her fate; but it does not take the responsibility away from the other accused and does not make their crime any softer.