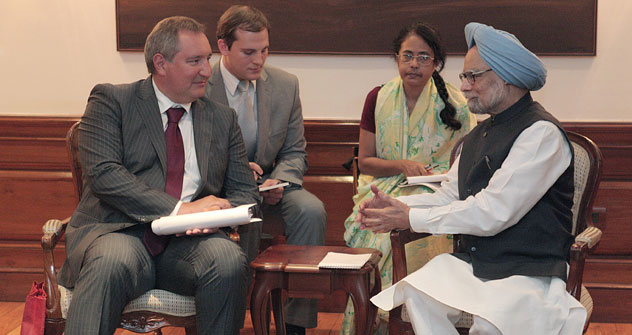 The two sides broadly succeeded in putting their views across to each other on contentious issues, though it would be inaccurate to say that all wrinkles in the bilateral relationship were smoothened out.

Now that Russian Deputy Prime Minister Dmitry Rogozin’s three-day official visit to India has just concluded, it would be appropriate to have a big picture of Rogozin’s intense interactions with his Indian interlocutors and examine the hits and misses.

For starters, the visit provided an opportunity to the two sides to discuss at the top level the entire gamut of bilateral relations and also thrash out a specific agenda for President Vladimir Putin’s upcoming October 31-November 1 India visit.  The two sides broadly succeeded in putting their views across to each other on contentious issues, though it will be fallacious to say that all wrinkles in the Indo-Russian bilateral relationship were smoothened out during Rogozin’s talks with External Affairs Minister SM Krishna and his fruitful meeting with Prime Minister Manmohan Singh.

There are several takeaways for both the sides from this visit. From the Indian perspective, Rogozin made it clear both to his Indian interlocutors and the Indian media that Russia attached very high importance to its relations with India and the recent upsurge in Russian contacts with Pakistan was not and will not be at the cost of Russia-India ties. After co-chairing the 18th India-Russia Inter-governmental Commission on Trade, Economic, Scientific, Technological and Cultural Cooperation (IRIGC-TEC) with Krishna, Rogozin made it a point to clear the Russian position vis-a-vis Pakistan and asserted that Moscow does not do military business with India’s enemies.

Rogozin’s following remarks to the media after the IRIGC meeting are self-explanatory: “We are always cooperating with India to ensure safety of the region. We never created trouble for India in the region as compared to other countries. If someone says otherwise, spit in his face. We don’t do military business with your enemies. We don’t transfer any arms to them.”

The alleged Russia-Pakistan hob-nobbing is being written about in the international media for quite some time. Putin was “supposed” to visit Pakistan earlier and the Pakistani media had gone viral about the proposed visit that would have been first ever Russian Presidential visit to Pakistan. However, Putin cancelled the visit and the Russian foreign ministry maintained that it would be wrong to dub it as ‘cancellation’ as no such visit had been announced by Moscow in the first place. However, Russian Foreign Minister Sergei Lavrov has held consultations with the top Pakistani leadership and Pakistan Army chief Gen. Ashfaq Parvez Kayani visited Moscow earlier this month, the first-ever visit by a Pakistani army chief to Russia.

The unambiguous and very strong remarks by Rogozin on reports of Russia cozying up to Pakistan, India’s traditional rival, was probably necessary and he must have received instructions from the top Russian establishment to clear the air. He was asked a blunt question by journalists whether Russia was planning to sell arms to Pakistan. His response was unexpectedly strongly-worded wherein he not only rubbished such rumours but also equally bluntly advised reporters to “spit” in the face of people who were spreading such canards.

It does not happen very often when a top government functionary, that too from the elite P5 club, uses such strong words to make a point. Rogozin’s “spit in his face” remark must have been music to the ears of the Indian diplomatic establishment.

The IRIGC carried forward discussions on some very important joint projects that the two sides have been discussing for some time but none has taken off yet. India is deeply interested in Russian gas fields while the Russians are keen on taking the Indian steel sector by storm. Both realise that it will be a win-win situation for them, which if it were to materialise in double quick time, would ensure that the $20 billion target of the Indo-Russian bilateral trade would be achieved before 2015. The next session of the IRIGC-TEC will be held in Moscow in 2013.

The signing of a mega gas deal between India’s Gas Authority of India Limited (GAIL) and Russia’s Gazprom is a giant step in boosting Indo-Russian bilateral trade. GAIL has signed a legally binding 20-year liquefied natural gas (LNG) sales and purchase agreement (SPA) with Gazprom Marketing and Trading Singapore (GM&TS), a 100 percent wholly-owned subsidiary of Gazprom Marketing & Trading. Under the terms of the agreement, GAIL will receive 2.5 million tonnes of LNG per annum over a period of 20 years beginning 2018-19. LNG will come from Gazprom's Shtokman production facilities, which has 130 trillion cubic feet of in-place reserves.

At the IRIGC meeting, the two sides expressed optimism at the increase in bilateral trade turnover during the year, though they acknowledged that the level of economic engagement was not commensurate with the potential which exists. The meeting was marked by a constructive approach towards resolving some outstanding concerns related to specific investments and projects. The main outcomes of the IRIGC discussions were as follows:

• It was agreed to carry forward the initial momentum gained from the newly constituted Working Group of Modernisation and Industrial Cooperation. The focus of this new mechanism, which held its first meeting earlier this year, is to harness benefits from newer and innovative commercially-viable technologies.

• In addition to traditional sectors for bilateral trade and investment, newer arenas were identified for future growth and development. Some of these include civil aviation, infrastructure, audio-visual & entertainment services and micro, small & medium enterprises.

• The two sides agreed to bolster greater inter-regional cooperation between the two countries, encouraged by the recent successful visits from either side by official representatives and business communities of certain regions/States.

• The conclusion of long-term purchase agreements for LNG between Indian and Russian energy companies in the past one year indicates that further synergies can be achieved in the energy sector.

• With the conclusion of over 500 joint projects in the field of Science & Technology, this remains one of the important pillars of the IRIGC framework. The opening of the two India-Russia S&T Centres in Moscow and Gurgaon in the last year can contribute in a constructive manner to deepen this engagement.

On the flip side, the Russian blues on two most contentious issues from its perspective remained unresolved during Rogozin’s India visit. At the IRIGC meeting, India conveyed to Russia that during the IRIGC meeting that Units 3 and 4 Kudankulam Nuclear Power Plant will have to be brought under the purview of its nuclear liability law. However, India also assured Russia that it is willing to renegotiate the price issue.

After the 3rd and 4th units of Kudankulam are brought under the Indian liability laws announced in 2010, the cost of the two reactors would go up sharply. The Indian Government has not agreed with the Russian argument that the liability law was not in keeping with the spirit of the 2008 civil nuclear cooperation agreement.  India and Russia had recently signed an agreement for a $3.4 billion Russian line of credit for the reactors. The cost for the two reactors is expected to be close to $ 7 billion. For his part, all that Rogozin’s Indian counterpart SM Krishna had to say was this: "We did discuss the preparatory work for the units 3 and 4 at Kudankulam. Further techno-commercial agreement is still being negotiated by our experts and I have no doubt that we will come to mutually acceptable resolution of this issue."

Russia’s Sistema has a 56.68 percent stake and together with the Russian government holds a 74 percent stake in Sistema Shyam, which had 21 of its 22 permits cancelled by the Supreme Court on February 2, 2012 in the 2G spectrum case. Sistema Shyam has filed a curative petition before the apex court, asking it to set aside verdict cancelling its licences. The court-ordered 2G spectrum auction is expected to begin on November 12, 2012 with October 19, 2012 being the last date for applications for potential bidders.

Rogozin had recently threatened to move International Court of Arbitration against the Indian Supreme Court's decision to cancel Sistema's 2G licences. During his just-concluded visit, Rogozin urged India to "demonstratively" help businesses groups in dealing with emerging situations through the bureaucracy. Rogozin said: "We should hold the rules of the game till the time it is over. We should allow our business community to see the green light in order to begin active interaction and conclude major contracts. And so I would like to express the hope that we will be able to resolve the current difficult situation with the Russian investments in Titanium Products Private Ltd and Sistema Shyam TeleServices in India."

Overall, Rogozin’s India visit was quite fruitful. As for the divergences and differences that still remain unresolved, this is what diplomacy is primarily meant for. It is hard to find any two countries in the world that don’t have a single point of divergences between them. It is work in progress between India and Russia and this work will reach its peak level when Putin visits India within a fortnight.