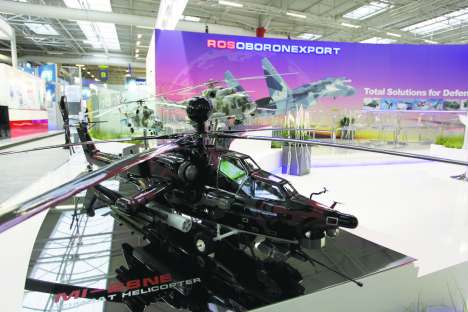 Russia’s defense industry supplier Rosoboronexport said it plans to export at least $11 billion worth of arms this year and has already exported $6.5 billion worth in January-March. Photo: ITAR-TASS

Military cooperation between the giants is once again on the rise with China accounting for 15 percent of Russian military exports. India remains Russia’s largest market.

The slowdown in military and technical cooperation between Russian and China observed in the mid-2000s was followed by an active growth phase. Russian officials have recently said that defence exports to China are now close to $2 billion, which is comparable to the level achieved in the 1990s.  Yet the nature of Russian exports has changed. At the moment, Russia is primarily a supplier of certain high-tech components or systems, rather than complete weapons systems.

Deputy Director of the Federal Military-Technical Cooperation Service Vyacheslav Dzirkaln said that China accounted for “approximately 15 percent” of Russian Military exports in 2011. Given that Russian export of weapons totalled $13 billion that year, supplies to China were close to $1.9 billion. Since the beginning of 2012, China has purchased MI-171 helicopters and AL-31F engines, in deals worth $1.3 billion.

A few years ago, it looked like the slump in defence cooperation between the two countries was irreversible. The bilateral commission for military and technical cooperation failed to convene on a regular basis in 2006 and 2007, as there was nothing to discuss. In the early 2000s, China refused to continue licensed production of the Su-27SK fighters in Shenyang and later started production of its own analogue of the Russian model, the J-11B, breaching the Russian licence deal.

It was widely believed that the Chinese market was closed to Russia. Beijing kept buying Russian helicopters and air defence systems but there were concerns that those areas of cooperation would eventually be closed because of China’s rapid industrial advancements. However, China’s military and technical ambitions were growing faster at a faster pace than its industrial sector.

China makes four relatively modern types of tactical combat aircraft: the J-11B, FC-1 and J-10 fighters and the JH-7A bomber. The JH-7A is the only combat aircraft powered by a Chinese-made engine and even those WS-9 Qingling engines are licensed copies of the British Rolls Royce SPEY MK 202, which took the Chinese about 30 years to assimilate as the license withdrawn in the 1970s.

As for the other aircraft, the J-11B uses the AL-31F engine and the J-10 is powered by the AL-31FN. Their Chinese analogue, the WS10, is produced domestically but it is not reliable enough and has a limited lifetime to be able to drive out the Russian engines from the market. The FC-1 fighter is powered by the Russian RD-93, which won’t be replaced any time soon. The Russian-made D-30KP2 is being installed in the Chinese long-range bomber H-6K and the heavy cargo aircraft Y-20, which is being developed in Xian. Meanwhile, China is yet to identify the types of engine for the two fifth-generation fighters currently being designed.

Supplies of other components and systems that are less expensive and less conspicuous to the media, including in the electronics industry, are also growing.

China is naturally making efforts to achieve self-sufficiency in the military and technical sector but Russian developers often come up with something new to offer. Importantly, the import of components and materials from Russia does not undermine the status of China as a great military power.

The United States and the European Union develop their defence industries relying on international cooperation. The Chinese defence industry has made significant progress in deploying new arms systems and it would only be natural if reliable foreign suppliers were engaged in new projects.

At the same time, future supplies of Russian turnkey arms and weapons systems to China cannot be ruled out. China is eagerly developing its military transport aviation and has already acquired three old Il-76 aircraft from the Russian Air Force. China is also interested in the Il-76MD-90A, also known as the Il-476, a new modification of the Il-76. Tests of the Il-476 have recently started in Ulyanovsk and mass production is expected to be launched after 2014.

Russia and China are also in talks over supplies of Russian Su-35S fighters, the newest generation of production combat aircraft, which could seriously enhance the capability of the Chinese Air Force. Yet China still remains undecided on resuming purchases of complete combat aircraft from foreign suppliers.

Judging from statements by Russian officials, the two countries may soon start negotiating deliveries of new S-400 air defence systems. Previously, in the 2000s, China bought 15 S-300PMU2 Favorit battalions, becoming their first foreign buyer. The Favorit is currently the most powerful air defence system in China, safeguarding the country’s most important cities, including Beijing. China may start buying new types of Russian engine for its fifth-generation fighters in the long run.

Russian companies and the Russian Government have seriously modified their original approach to military and technical cooperation with China since the 1990s. Back then, the Russian military-industrial complex only survived by exporting to two countries – China and India. Its status as a near-monopoly buyer gave China an important bargaining chip. Since then, Russian defence industry economics have been dramatically reformed.

Russian Deputy Prime Minister Dmitry Rogozin recently said that military exports account for only 22 percent of the combined revenues of defence industry companies, whereas domestic defence orders account for 45 percent and sales of civil products and services account for the remaining 33 percent.

Russian arms exports have been diversified: currently, Russia has several sales markets as big as or even larger than China, specifically, India, Algeria, Vietnam and Venezuela. Between 2012 and 2015, India will stay Russia’s number one importer, buying close to $14.3 billion worth of Russian arms and technology.

Nevertheless, the Russian and Chinese administrations have repeatedly demonstrated their intention to promote bilateral cooperation in the military and technical sector, which is regarded as a pillar of the bilateral relations and an important factor in building up mutual confidence in the security sphere. So tactical discrepancies and concerns are bound to be overcome.