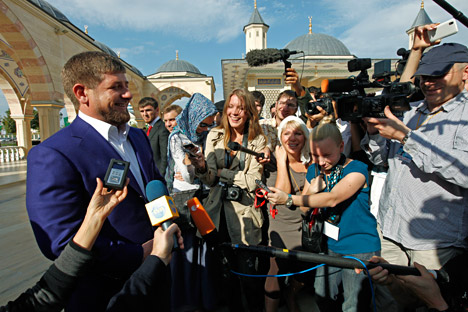 In mid-October Grozny celebrated its city day, which is traditionally held on the birthday of Chechen Republic leader Ramzan Kadyrov (pictured). Source: ITAR-TASS

In mid-October Grozny celebrated its city day, which is traditionally held on the birthday of Chechen Republic leader Ramzan Kadyrov. Ogoniok's correspondent spent some time in Grozny and discovered that the Chechen capital is more complex and diverse than fun and flashiness.

Just like last year, global stars came out to celebrate city day in Grozny. British actor and singer Craig David took the stage in front of Grozny’s skyscrapers, as did French superstar Gerard Depardieu. Ramzan Kadyrov even danced the Lezginka with Italian actress Ornella Muti. But all of the festivities put on for the television cameras reflect only one side of Grozny – a city nearly destroyed by war and rapidly rebuilt.

These days, Grozny does not appear as intimidating as once did. Perhaps carrying a gun around is finally going out of style; maybe the people have just grown tired of it. And there do not seem to be as many police officers on the streets. Even passers-by appear to be less anxious than they used to be. Not even close. Noticeably, there are more people in Muslim clothes.

Chechnya: From the inside (photos)

The city center is spotlessly clean, with its shiny white walls, coffee shop windows, and Grozny City towers rising imposingly overhead as the symbol of a new, peaceful, prosperous era. Taxi drivers ask proudly if the city is pleasing and, not waiting for an answer, reply themselves: “It’s all thanks to Ramzan.”

In the 1990s, Asya was fresh out of high school and witnessed the two Chechen wars first hand. Now she sits in a coffee shop and waits for a waiter brings her an iPad – the menu is displayed on it. There are not any people to be seen with tablet PCs out in the streets, but the menus in cafes do this all the same. Asya starts to comment on the local women:

“Have you looked around the city already? You must have noticed our girls. It’s just so sad to see them all draped in those hijabs and abayas. I’m not against religion; it’s just that we’ve never had anything like this before. Ramzan said he liked how women dressed in Dubai, and wanted the same in Chechnya. And it only took a year or two for Chechen women to turn into shadows. He’s not very happy about it himself. He says that wasn’t what he meant.”

The new Muslim dress requirements also apply to men. According to the rules, religious Chechen men must wear special clothes (purple trousers and shirt) on prayer days. Now, it is quite hard to distinguish between young people on Muslim holidays. Even Chechens sometimes ironically refer to young people dressed in these identical costumes as “Friday boys.”

The Chechen people are, traditionally, followers of a form of Sufism that has been modified to fit in with local customs that predate both Chechnya and Islam itself. This is why they cannot fathom why Kadyrov would want to transform the country into an Islamic state similar to Saudi Arabia. The general consensus is that Kadyrov is not very popular in the West. He enjoys support from Russia; but even Russia’s affection for him cannot last forever, so he is trying to get a footing in the East. By garnering the support of Arab sheikhs, Kadyrov is reaffirming his power, as well as covering his back in case of a falling out with Moscow.

The truth be told, a lot of people in Chechnya are sincerely grateful to Kadyrov – a president that they are actually happy with. Grozny, in ruins after two wars, was rebuilt almost from scratch in just five years. Many of the customers in the coffee shop with the iPad menus spent their entire childhoods taking shelter from bomb attacks in basements and cellars. It is not just peaceful here now – it is now shining with modern splendor.

But there are also people of a different opinion. People are still being kidnapped in Chechnya. There are hundreds of unsolved cases. The families of those who have been kidnapped do not rejoice at the glitz and glamour of Grozny City, for no one is bringing back their loved ones.

It would be untrue to say that the only things Grozny really cares about are Islam and Ramzan Kadyrov. Although there are no nightclubs in the traditional sense, the city does have a night life. If you ask a taxi driver where you can get a beer, five out of six of them will say “nowhere – it’s prohibited, the president does not approve.” But this is not entirely true.

There are nearly half a dozen or so places within a 2-mile radius that openly sell Ossetian beer; you can even find vodka if you know where to look. It is not forbidden to drink alcohol in Chechnya, but it is strongly discouraged by tradition. A son will never show up drunk or sit down to drink with his father – this is highly disrespectful. The religious ban on alcohol consumption means that there really are very few drinkers. There is simply no demand. This probably explains the lack of pubs and bars in the republic.

But those who do drink do it with gusto. These are mostly well-educated men over 30 – men who doubt the system. Conversations routinely slip into the dark abyss of politics. They speak loudly, without looking around, oblivious to the group of policemen eating mutton shish kebab next to them.

Meanwhile, their criticisms of the government hardly extend beyond the nation’s founding fathers, of whom they have grown tired. Almost everyone here is unemployed. Some for obvious reasons: there are still no jobs outside the administration or police. Others refuse to work on principle. One journalist, for example, has grown sick and tired of writing about the ahead-of-schedule completion of construction projects.

Village behind the glitz

A 10-minute drive from Putin Avenue will bring you to the village of Kirovo. It is also a district of Grozny: a few rows of low, decrepit houses behind rusty Soviet-era fences, and no signs of the new prosperous life, even on the outside. The houses are falling apart, there are no roads to speak of, and a single grocery serves the entire village.

An emaciated cow is wandering from fence to fence. A lone Russian – the only one around and with a camera to boot – immediately drew a crowd of elderly women complaining about the miserable barns in which they had to live. Apparently, the 300,000-rouble ($9,700) compensation for the houses that burned down during the war was not nearly enough even to pay or repairs. And most importantly, almost everyone in the village is ill.

“Why doesn’t Ramzan bring his builders here?” a 70-year-old Chechen woman asked indignantly. “Where are his famous doctors? The only things they’ve built here are oil refineries and railways. Even at 40, no one is healthy anymore. No one cares about us now. There was once a healer down the street, but that was for other diseases.”

From the top of a hill in Kirovo, you can still see the shiny Grozny City towers. But the old men can no longer climb it.

The articles is abridged and first published in Russian in the Ogoniok magazine.