"Yekaterina Samutsevich's lawyer, Irina Khrunova, has drawn ECHR's attention to the fact that "even a suspended sentence given to Samutsevich for expressing her opinion, is illegitimate and breaches Article 10 of the European Convention, which guarantees freedom of speech," the newspaper said, quoting the lawsuit filed by Khrunova with ECHR.

In her letter, the lawyer accused Russian courts of repeatedly violating the convention's ban on torture. 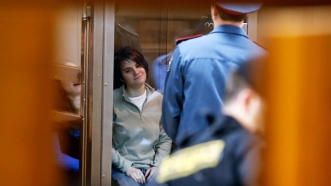 "The court proceedings lasted a whole day, and the trial was adjourned for 30 minutes at the most. Apart from that, the defendant was denied the opportunity to eat, drink and sleep properly over this entire period of time. She had to wake up at 5:00-6:00 a.m. in order to be convoyed to the Khamovnichesky Court," Kommersant said, referring to the document.

Khrunova promised to lodge an extended complaint with ECHR before the end of the year.

"The rules of the Strasbourg court allow us to submit so-called initial letters without having the text of a Russian court's verdict. A number will be assigned to our case, and we will be invited to lodge an extended complaint in line with the requirements of the European Convention," the lawyer told Kommersant.

Defense lawyers representing the other two women from Pussy Riot told the newspapers that they were also compiling similar complaints to the Strasbourg-based court.

"The case itself was unprecedented, and the entire trial violated both Russian laws and international legal norms. That is why I can guarantee that ECHR's resolution will be unprecedented as well," Nikolai Polozov, a defense lawyer for another Pussy Riot member, Maria Alyokhina, told Kommersant.