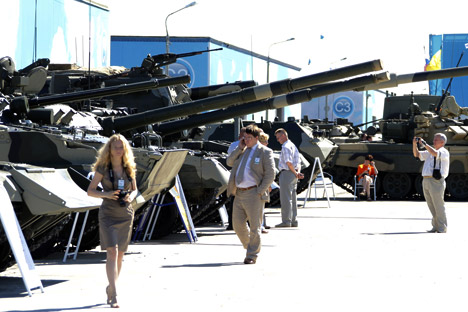 Putin believes that his country should develop the technologies for the production of special equipment for the military-industrial complex, which it purchases abroad.Source: Anton Denisov / RIA

Nobody can dictate to Russia what policy it should implement in the field of military technology cooperation, says Vladimir Putin.

Russia has finalised contracts for the supply of armaments and military hardware only with legitimate authorities and exclusively to ensure the defence capability of sovereign countries, President Putin said at the session of the Commission for Military Technology Cooperation With Foreign Countries.

On Wednesday, the Russian President summed up the preliminary results of the military technology cooperation between Russia and its partners for 2012, saying that it is absolutely legitimate in character. Moscow has been accused more than once in recent times of offering military support to regimes that, some countries believe, have lost their legitimacy. Vladimir Putin put a particular emphasis on the fact that nobody could dictate to Russia what policy it should implement in the field of military technology cooperation. Only sanctions of the UN Security Council can serve as sufficient substantiation for limiting supplies that can be used for military purposes.

“In all other cases nobody and under no pretext can dictate to Russia or to any other state with whom and how it should trade. Unilateral or collective restrictions and bans outside the framework of the UN Security Council, especially, if they are politically motivated are not regarded as within international law. With all ensuing consequences,” Putin said.

The Russian head of state also said that while signing contracts Russia comprehensively assesses the situation in each part of the world. Not all exporters of military hardware are so scrupulous, he added.

Moscow also plans to perfect the legal base for cooperation in military technology, and to bring both bilateral and multilateral contracts into conformity with the present-day realities, and also to form a long-term programme of cooperation with its partners.

By October 2012, Russia supplied armaments and military hardware to its clients abroad to the tune of more than $10 billion out of the planned $13-odd billion. The current volume of exports may surpass last year’s figures, Vladimir Putin said.

“The plan of export supplies for this year is strictly being implemented,” Putin said. “Military supplies to the tune of 10.7 billion dollars were carried out by October 1. This is approximately 80 per cent of the planned work for this year. We can forecast that we will increase somewhat the supplies of military hardware and arms abroad as compared with 2011. Such a positive trend, of course, should be maintained.”

President Putin claimed that Russia is one of the key participants in the global market of armaments. In export volumes, it remains second in the world and takes care of its reputation as a conscientious and responsible partner. Vladimir Putin stressed that Moscow will develop military technology cooperation with the BRICS countries and Vietnam on the basis of new approaches displaying flexibility and expediency. This is caused by the high competition on the arms market.

India and China are Russia’s traditional partners. However, South Africa and Brazil have great prospects for boosting their relationships in the field of military technology cooperation. This would call for production, cooperation and joint research, the creation of service systems, and of course, gaining a joint access to the markets of third countries.

At the same time, Russia’s President believes that his country should develop the technologies for the production of special equipment for the military-industrial complex, which it purchases abroad.

The deepening of civilised and mutually advantageous partnerships is a very important instrument for safeguarding Russia’s foreign-policy interests and an inseparable part of efforts to counter global challenges and threats, Putin said.