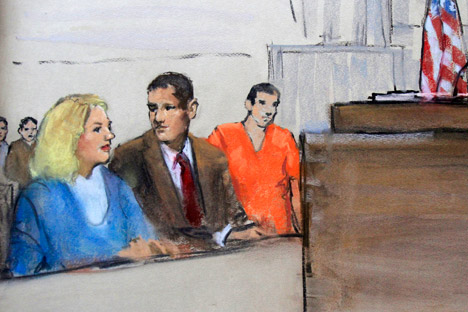 Russian spy Andrei Bezrukov: "Intelligence is not like a thriller novel or action film. If you behaved like James Bond, you wouldn’t last more than half a day – a day, tops." Source: AP

An undercover Russian agent who worked in the United States for more than 20 years explains why spies look more like scientists than action heroes.

For many years, Donald Heathfield was a model American citizen. He owned a consulting company, held a Harvard degree, had a wife and two kids. It hardly occurred to any of his friends or colleagues that his real name was Andrei Bezrukov and that he was the head of a Russian spy network.

Bezurkov had been an undercover agent abroad since the end of the last century and, during this time, did not utter a single word in Russian. He returned to Russia two years ago, following a scandal that exposed his true identity.

Secret life in the U.S.

Russian Reporter: So, let’s start by getting one thing straight. What exactly were you doing in the U.S.? What is it called? Spying?

Andrei Bezrukov was born in Kansk, Siberia and graduated from Tomsk University. He was an undercover intelligence agent with his wife, Yelena Vavilova, for more than 20 years. In 2000, he graduated from John Kennedy School of Government at Harvard University with a Master’s degree. He was arrested in the United States during the summer of 2010, along with others involved in the spy scandal (including Anna Chapman). Bezrukov was exchanged for four Russians accused of spying for the United States and Britain. He is currently an employee at Rosneft.

RR: They say that, during your time abroad, you did not utter a single word in Russian. Is that true?

A.B.: Yes. This is one feature of undercover work. You cannot use your native tongue, even at home; you have to be a control freak. That said, after working for several years, it comes naturally to you. You even have dreams in other languages. My wife and I now speak mainly in English and French.

RR: Did your wife work with you? Was she also an undercover agent?

A.B.: Yes, my wife Yelena is also a professional intelligence agent, and we worked abroad together from the first day to the last.

RR: You lived in a country for a long time while practically working against it. Is that correct?

RR: What were your feelings toward the people around you, if they weren’t your enemies?

A.B.: They were my main object of study. It is a country that you must know; you want to understand its people in order to help your country’s leaders make the right decisions.

RR: In other words, an intelligence agent is a kind of undercover scientist?

Having a man on the inside, someone who can counter the abundant misinformation and help sort out what is really going on is a positive and stabilizing factor. A tiny bit of critical information is sometimes enough to prepare and defend yourself. I would put it this way: intelligence is essentially an exercise in national defense.

A.B.: I can’t say that I fell in love with the country. I have lived in countries that are culturally more interesting than the United States. But, of course, I respect the Americans. There are many things that I like about them: their optimism, ingenuity, readiness for change, the ability to honestly and promptly admit to and correct their mistakes.

RR: Does a spy need to have a flair for acting?

RR: Did you ever think of becoming an actor yourself?

A.B.: No. You see, while an actor assumes another guise for a brief period of time before returning to his normal life, as an intelligence agent, you become reincarnated gradually, more thoroughly and deeply. You become a member of another nation, another language, but your ideas do not change.

RR: So how close are the James Bond films to the real life of a secret agent? Is it about routine or genuine risk?

A.B.: Intelligence work is not planned to fail. The risk is there and decisions are taken to minimize that risk. Intelligence is not like a thriller novel or action film. If you behaved like James Bond, you wouldn’t last more than half a day – a day, tops.

Even if you imagine that there is a magic safe where all the secrets are kept, half of them will be outdated tomorrow and nobody would need them. A top-class agent knows what his opponent will think tomorrow, and not what he was thinking yesterday.

A.B.: Yes, our children were born and raised abroad. They grew up like all normal children, and, of course, they didn’t speak a word of Russian.

RR: They spent all their lives in the United States. Perhaps they are more American than Russian?

A.B.: There was definitely nothing Russian about them before they came to Russia, but I wouldn’t describe them as typical Americans. Knowing how the American cultural "melting pot" molds everyone by the same template, we deliberately sent our children to a French school, so that they would acquire a European outlook. And, of course, we tried to give them the chance to see and compare different countries and draw their own conclusions.

RR: How did your children take what happened to you, especially your arrest?

A.B.: We were arrested during my elder son’s birthday party. For a few minutes, they thought it was some kind of prank – a crowd of people in dark suits arriving in black cars. Of course it was a shock to them.

But the fact that we were always close to them and there was always free dialogue, mutual understanding and trust in the family helped them to overcome the shock. When we finally got to see them in Russia after the swap, and they learned what our real profession was, the first month we talked into the early hours almost every night about life and history. I think it eventually sank in why we had made this choice in our lives.

RR: Did you offer them any ideology?

A.B.: No, we just tried to bring them up to be decent, honest, open-minded people, to be humanists in the broad sense of the word.

RR: How is their life shaping up? Have they managed to fit into Russian society?

A.B.: They are in the process of being integrated, and it is a difficult process. Russian, of course is not the easiest language to learn. They have travelled around the country a lot over the past two years, and they were particularly impressed by its wildlife, especially Siberia.

Betrayal: The game over

RR: Your group was uncovered after an external intelligence officer betrayed you. What would you tell him if you met him?

A.B.: Well, I don’t think that guy, Poteyev, has any intention of meeting me…

RR: But what if you did meet him? Humour us.

A.B.: You know, I wouldn’t say anything. What’s the point? I think he’ll feel lousy until the end of his life. Betrayal is like an ulcer, it eats at you. You cannot retain equanimity if you know that you have betrayed or killed someone. The CIA and FBI are happy that Poteyev turned out to be a traitor, but they detest traitors, just like everyone else does. I am sure he has felt it after two years in the United States.

RR:When you were busted, did they try to recruit you?

A.B.: No, they knew from Poteyev and from their own observations that it was futile. After the arrest, FBI agents treated me and my wife with studied respect, the way professionals treat other professionals.

RR: Could you fill in some details on what happened after you were exposed? What were you feeling at that time?

A.B.: I remember that, immediately after the arrest, I was very alert, even physically. It was as if all my previous life and plans had vanished in some kind of fog. It was important to understand why we failed, and get in touch with my wife and children.

I knew that this was the end of my former life and that I was entering a new stage, a stage where new rules applied, and one that could last for years. The state of being ready for anything lasted about ten days, until it became clear that talks about our release were under way at the top level.

Russia and the U. S.

RR: As an expert and historian who knows the country well, how do you see America?

A.B.: The U.S. is living through a complicated period; it is a superpower that is turning into a regular, strong country – perhaps still a leader in some areas, but not an unchallenged leader. The Americans feel very strongly about it. Some people are wondering what place the U.S. will occupy in the world. It is interesting that many of these people are top military experts, highly educated people who are in a position to assess the country’s situation realistically.

These military experts think the U.S. should take a stance oriented more toward cooperation in solving global problems such as economic slowdown (not only on the national level, but also on the global level), instead of holding on to their positions by force. But, so far, these people are in the minority.

The dialogue about America’s future is only beginning, and we should watch it because it influences Russia and how they see us: as an enemy or, more realistically, as a strong player in the multipolar world.

RR: How do the Americans perceive Russia?

A.B.: In general, Russia is marginal to American media and American politicians. After the Soviet Union ceased to be, the only thing that worries them is our military potential, which still poses a threat. I don’t think there is anything else that interests American politicians about our country.

It is all fairly stereotypical: Russia is flawed, it plays according to different rules and it is undemocratic. They see Russia as weak and, therefore, uninteresting and undeserving of a real dialogue with a view to partnership. It’s like between people: if you want others to respect you, you have to respect yourself first.

The interview is abridged and first published in Russian in the Russky Reporter magazine.