Uncertain world: Will the EU expand via secession? 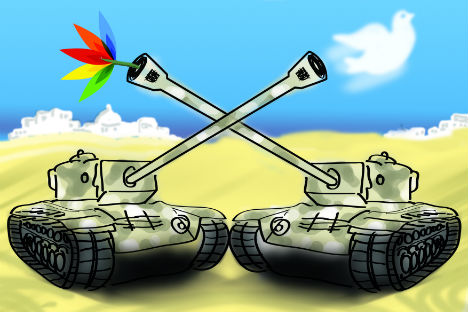 Many in Europe look with open envy at the BRICS countries – Brazil, Russia, India, China and South Africa – which have the sovereignty to make their own decisions.

Five years ago, when Europe was debating whether to recognise Kosovo’s independence, Russia warned against opening a Pandora’s Box: revising one country’s borders would trigger the rise of more and more independent states.

At the time, President Vladimir Putin reminded Europeans about their own restive regions, such as Flanders in Belgium and Catalonia and Basque Country in Spain. This raised a few eyebrows, because Flemish separatists – whatever their misgivings about sharing their wealth with Wallonia – still would never dream of comparing themselves to the militants in Kosovo.

But “Putin’s curse” seems to have gained traction since then. The government of Catalonia has scheduled an independence referendum for November, and the other day British Prime Minister David Cameron and Scottish First Minister Alex Salmond agreed to hold a sovereignty plebiscite in Scotland in two years.

Of course, none of this has much to do with the Kosovo precedent: the crucial factor in these two cases is the economic crisis, which has galvanised separatist sentiment in Europe. Catalonia, which was forced to ask Madrid for help in settling its debt, the largest among Spanish regions, has suddenly remembered that this debt was incurred as a result of the Spanish government’s fiscal policy. Catalonia accounts for a quarter of Spain’s GDP, but gets back in public services only half of what it pays into national coffers.

Scottish First Minister Alex Salmond is also approaching independence via economics. He told business leaders in Chicago: “Smaller independent nations are now benefiting from their natural economic strengths – flexibility, speed of decision-making and the ability to clearly define national interests and strategies.” This is a questionable assertion, because there are more “smaller” nations than successful ones. But it is notable that he made this argument at all. It contradicts everything which, until recently, was considered conventional wisdom: that “smaller nations” stand no chance in the globalised world and can only hope to achieve anything through joint efforts. Ironically, the blame for calling this supposed axiom into question lies with the EU, notwithstanding its Nobel Peace Prize this year and the many plaudits it has received as a positive example of the power of integration.

Had Greece remained outside the convoluted EU and Eurozone structure, it would have already emerged from the crisis. The same is true for Spain and Italy: the inability to devalue a national currency has driven these countries into an economic dead end and is fuelling separatism in Spain. Moreover, the other EU countries clawing their way out of recession are angry that they must contribute to a common fund to support these heavily indebted member countries.

The importance of being able to pursue an independent policy amid growing global chaos has proved greater than anyone expected. Many look with open envy at the BRICS countries – Brazil, Russia, India, China and South Africa – which have the sovereignty to make their own decisions.

During the stable, Cold War era, a country could choose a side, follow the leader and enjoy military, political and economic security. But now leaders are trying to adjust their policies to rapidly changing circumstances, moving from one extreme to another and dragging their followers along with them. Those who are less tightly bound to a leader are much better off. For example, the Czech Republic smugly looks on as Slovakia, which rushed to join the Eurozone, now has to scrape together its share to support Greece.

But unionists have a strong position in the debate with separatists. They claim that the damage wrought by secession would outweigh any benefits. This is a compelling argument, so it should be no surprise if the outcome of independence referendums disappoints separatists.

On the other hand, the economic situation is not creating separatist sentiment, only fuelling it. Catalonia and Scotland never lost their distinct national identity, so the possibility of secession has always lingered just below the surface.

The economic and other processes underway in this young decade have cast a spotlight on the issue of self-determination. What is the essence of the Arab Spring? Will the revival of these Arab countries proceed on a nationalist foundation (with some rights granted to minorities) or on a religious, supranational foundation? Evidence of the latter can be found in the growing influence of religion in politics in all Arab Spring countries, each with a radical segment intent on realizing common Islamic principles. A more likely scenario involves the synthesis of these two approaches, with the final outcome depending on their proportion. Strangely, a relevant example here is Israel, a nation based on religious identity.

It is still difficult to imagine an independent Scotland or Catalonia, but the discussion has already reached an advanced stage. A special expert group has been established in Scotland to analyze issues related to the armed forces and military security in the event of secession from Britain. Since most agree that the new countries will have to reapply for membership, this is good news for the EU and NATO: they will at least be able to claim that they are continuing to expand.

Fyodor Lukyanov is Editor-in-Chief of the journal “Russia in Global Affairs.” First published in Russian in RIA Novosti.