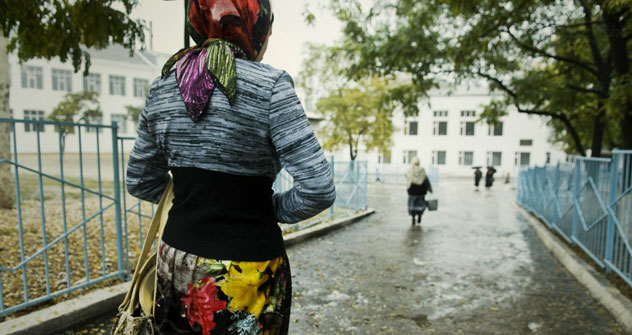 The question of how to reconcile the secular nature of the Russian state with religious freedom is one of the most painful and most important for the country's future.

A teacher tells a few Muslim schoolgirls to take off their hijabs, the traditional veils Muslim women wear to cover their hair and neck. The girls' parents call on local prosecutors to protect what they claim is a constitutional right to bring up their children in an Islamic religious tradition. The federal children's rights ombudsman chimes in, calling for compromise. The president follows suit, saying that believers' sentiments should be respected but at the same time the state must remain secular...

Was this in Paris? Lyon? No, it was in Russia. These events occurred in Stavropol Territory, a multiethnic region neighbouring the restive North Caucasus. The school in question, located in the village of Kara-Tyub, has about 400 pupils, of whom more than 300 represent the predominantly Muslim Dagestani and Nogai peoples.

A temporary compromise was reached – for the girls to wear head scarfs instead of hijabs – but not all of them complied.

All the signs are that this tug of war will continue. At a recent dinner party, I discussed the issue with the well-educated and polished wife of a high-ranking Russian diplomat. “But of course we are going down the same route as France and other European states – Islamisation is on the rise and we can do nothing about it,” she opined. I had to remind her that according to the 2002 census 80 percent of the population consider themselves Russian. And even though the latest 2010 census may well show that this figure has declined, Russia is still pretty much dominated by, well, Russians.

They however feel increasingly on the defensive, especially in big cities like Moscow, the destination for intra-national and international migration flows.

The construction of a huge new mosque in central Moscow next to the modest existing one evokes intense suspicion, mistrust and even hatred among many Muscovites. On Muslim feasts like Eid al-Fitr and Eid al-Adha, tens of thousands of worshippers jam the surrounding streets and lambs are slaughtered in apartment building courtyards all over the capital, which triggers an explosion of calls on Russian blogs and social networks to end the “savagery” and “show the newcomers who the master is here.”

However, it is rare that anything dramatic happens. Recent opinion polls show that if elections to the Moscow City Duma (council) were held now, 12 percent of the city residents are ready to vote for a party “that would stand up for the Russians.” The problem is that the “newcomers” are very frequently Russian citizens, and often not even first generation ones.

The question of how to reconcile the secular nature of the Russian state with religious freedom is one of the most painful and most important for the country's future. Ethnic Russians (or, say, people of Slavic origin) have a weaker identity compared to Russia’s indigenous minorities or people coming from the former Soviet republics in the Caucasus and Central Asia.

Putin’s against wearing hijabs in schools but welcomes school uniforms

The Soviet leadership, just like its Yugoslav counterparts, feared Russian nationalism and mostly kept it under a tight lid. Nationalism was anathema both to the party apparatchiks and to the liberal dissident intelligentsia of the 1960s-1980s. The former feared that nationalists could overthrow communist rule, while the latter thought of it as a remnant of the virulently anti-Semitic, Orthodox fundamentalist, monarchist movement of the last years of the Russian Empire.

No civilised nationalist discourse ever had a chance to emerge. When the Soviet Union collapsed, Russians were left to grapple in the dark in search of their new identity.

The Russian state is at a loss. Its representatives incessantly talk about the secular nature of the Russian state without defining what kind of secularism they are talking about. Is it the strict French model, or, say, the much more flexible German one? If the former, will the state restrict all religious activities in state institutions? This would make the Russian Orthodox Church, with its very visible presence in many spheres of life, the first in line to be cut down to size. If a more liberal approach is undertaken, what is the role of the state?

Looking at the growing trend for “Shariah” to spread “by stealth” in the North Caucasus, or indeed in the aforementioned village of Kara-Tyub and others like it in Stavropol Territory, one can only conclude that Russia's rulers have no idea what to do.

They can hardly be blamed. With painful memories of two wars in Chechnya no one wants to raise awkward issues of religion and identity. However, by not raising them, one just pretends things will eventually, somehow get sorted out. Which is a flimsy hope to say the least!

One of Russia's most prominent columnists, Oleg Kashin, put it succinctly a few days ago after a visit to Kara-Tyub: “When a local shopkeeper refused to sell alcohol, citing Ramadan, I realised that Russia is probably less united than we have come to believe.”