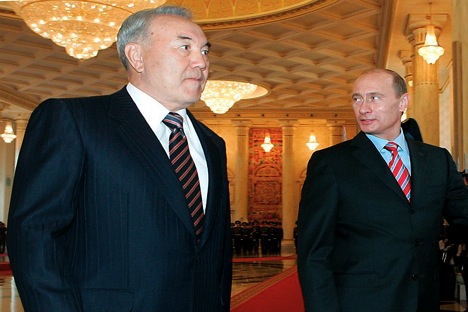 In an interview with Kommersant, Alexander Sternik, who heads the Central Asia wing of the Russian Foreign Ministry talks about the country’s economic and political interests in Eurasia.

It has been suggested that Central Asia is increasingly becoming an arena for rivalry between Russia, the US and China. Do you agree with that assessment?

Yes, the experts are talking about it. This is a case of not seeing the wood for the trees. What is happening in Central Asia is happening all over the world: a contest of ideas, concepts and geopolitical projects. The winner will be the one to propose the most attractive and pragmatic options for cooperation.

Russia is ready to invest considerable material resources in the region’s development, in strengthening its security and, equally important, in preserving the unique character of Central Asian multinational and multi-confessional societies. The Western countries prioritise promoting democratic values, building a civil society and introducing free trade, in short, development according to their own capitalist template. China concentrates on investment projects and cross-border cooperation. One might also mention India, Turkey, Iran, Pakistan and Israel, all of which see opportunities in the region for furthering their interests.

Are there contradictions between Russia and these players?

There are no insurmountable contradictions. Needless to say, (the involvement of others) is acceptable to the Central Asian states and not aimed at discrediting successful forms of interaction between Russia and the countries in the region. As for our goals in the region, they are clear and simple: security, economic integration, development and the well-being of our fellow Russians, who number over 5 million there.

The aims may be clear, but still Russia’s policy in the region is frequently criticised.

For all the shortcomings that – rightly or wrongly – incur criticism of our foreign policy, no major player has proposed a more effective model for collective security in the region than the CSTO (Collective Security Treaty Organisation) combined with the “network” and bilateral agreements with Russia in the military and military-technical sectors.

It’s the same in the economic field. President Putin’s recent visits to the region have shown that Russia is probably the only country truly prepared to stimulate economic growth in the Central Asian countries. Cooperation, of course, should be a two-way street. The partners must ensure a favourable investment environment and honour their obligations.

The US is drawing Central Asian countries into its orbit by promising to finance projects and supply arms. China’s strength is economic expansion and the granting of loans. What trump cards does Russia have, other than the ties inherited from the Soviet times?

Russia has no magic wand. But it has a clear vision of how to build a rational model of cooperation with the Central Asian countries. Its advantage consists in a flexible combination of various degrees of integration. The framework is provided by the CIS and the underpinning factor of defence and security is the CSTO. Advanced forms of integration are represented by the Customs Union and the Common Economic Space and outreach to neighbours in the region is put into effect through the SCO. This model is not a “home truth”, but a derivative of experience. It is by definition more subtle than any touted schemes and clichés such as the Greater Central Asia (proposed by the US) and suchlike, which are more about sloganeering than real substance.

Some say that Russia is seeking to revive the USSR in a new form by promoting integration in the post-Soviet space.

EurAsEc officials to get diplomatic immunity

Russia has no revisionist plans or desire to coerce anyone into cooperation. Incidentally, the idea of the Customs Union was put forward by President Nursultan Nazarbayev of Kazakhstan, not by the Kremlin’s spin doctors.

Yes, the Russian economy is the most powerful in the Russia, Belarus and Kazakhstan triangle and within EurAsEC. But our commitments are proportionately greater. For example, Russia contributes more than $7 billion of the total $10 billion EurAsEC Anti-Crisis Fund. This is as it should be. After all, no serious specialist dramatises the fact that France and Germany will always be the locomotives of the European Union.

The current formula of our policy in Central Asia is this: it is in the interests of Russia to have stronger partners. Their economic and military security is our security. In short, it is a win-win situation. This approach accounts for the readiness of the Russian leadership to invest heavily in the potential of Central Asian countries and to be as close to them as they themselves are prepared to be.