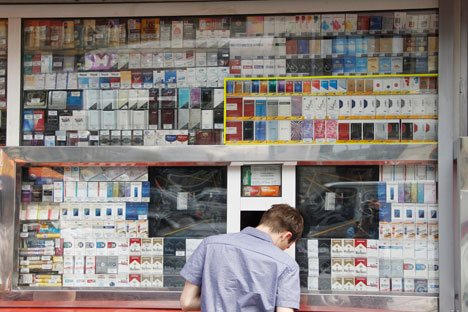 The bill, which seeks to ban smoking in public places, prohibit cigarette advertising and cut sales, is expected to reach the Duma by November 1. Source: RIA Novosti

A bill, which seeks to ban smoking in public places, prohibit cigarette advertising and cut sales, is expected to reach the Duma by November 1.

The Cabinet of Ministers’ unanimous approval of a controversial anti-smoking bill was the latest salvo in the debate over how to tackle Russia’s tobacco addiction. As a result, some government officials are preparing for what they say will be a “battle” with Russia’s powerful tobacco lobby.

“We will face an enormous amount of difficulties, particularly in the State Duma, and people will attempt to emasculate this bill,” Public Chamber member and former Duma deputy Maxim Mischenko said at a press conference.

The bill, which seeks to ban smoking in public places, prohibit cigarette advertising and cut sales, is expected to reach the Duma by November 1. It would be easier for the tobacco majors, however, if a more diluted bill were to become law. Industry lobbyists in Russia, where an estimated one-third of the population smokes, have already pointed out "flaws" in the bill.

Several officials, including Mischenko and fellow Public Chamber member Denis Dvornikov, head of the Public Committee for Open Justice, have called for a number of Duma lawmakers to be investigated over concerns about their ethics.

Nadezhda Shkolkina, of United Russia, and Sergei Shtogrin, from the Communist Party, are among those who find themselves accused of being key tobacco lobbyists.

In a letter to the Duma ethics committee last week, Dvornikov wrote that the deputies’ activities “are aimed at lobbying the business interests of large international companies in the tobacco industry.”

Shtogrin, deputy head of the Duma’s budget and tax committee, denies those allegations, claiming instead he simply advocates a more gradual increase in cigarette taxes, according to RBK Daily, which published his comments October 9.

Shkolkina, who headed the Council on the Development of the Tobacco Industry before she was elected to the Duma last December, told RIA Novosti through her secretary on Thursday that she does not comment on her previous duties, or on current anti-tobacco legislation, citing her current responsibilities as deputy head of the Duma’s agriculture committee.

Sergei Ivanov, a member of the Duma’s ethics committee, said his group has not yet reviewed these allegations. He added that even if their activities are proven to be questionable, responsibility for taking any further action lies with the commission that reviews the legitimacy of their income.

Some experts, meanwhile, remain convinced that these lawmakers play a crucial role in stymieing the legislation.

Kirill Danishevsky, chairman of the Russian Anti-Tobacco Coalition, said they have interests in keeping tobacco sales stable in Russia, adding that this sort of lobbying activity seldom draws criticism.

“The problem is that it’s not even considered a problem, because it’s considered legitimate business,” he said.

Foreign companies, such as British-American Tobacco (BAT), Philip Morris and Japan Tobacco International, account for about 90 percent of the Russian market – the second largest in the world, behind only China.

Health officials say around 400,000 Russians succumb each year to smoking-related illnesses. Russians spent over 4 billion roubles (about $130 million) on tobacco products in 2011 alone, according to Health Ministry statistics.

As it stands, the bill would restrict cigarette sales and ban smoking in all public places, such as restaurants, bars and cafés by 2015. Detractors argue that the bill, if passed, would harm small businesses, while doing nothing to guarantee a drop in smoking rates.

“The effectiveness of such measures, in our view, is highly questionable,” BAT said in a press release last month, adding that the law “must take into account the realities of the Russian market.”

Deputy Health Minister Sergei Velmiaikin told reporters Tuesday that the bill, prepared by the Ministry of Health, conforms to the standards outlined by the World Health Organization (WHO). Russia signed the Framework Convention on Tobacco Control with the WHO in 2008. This ties Russia to enacting tougher restrictions by 2015. But senior government officials concede the bill faces rough waters ahead.

“Needless to say, there are questions about this law,” Nikolai Gerasimenko, first deputy chair of the Duma’s health committee, told a press conference Tuesday.

Gerasimenko has been a key lawmaker in anti-tobacco legislation. He was a driving force behind Russia’s first post-Soviet law on tobacco, passed in 2002.

Mischenko, the Public Chamber member and leader of the pro-government youth group Young Russia, believes the most contentious moments will come between the bill’s second and third readings.

He told RIA Novosti the tobacco lobby will attempt to prove that the bill is poorly formulated in law and claim that it infringes on personal freedom. But some tobacco industry insiders have, so far, held back from vehement attack.

Vadim Zhelnin, general director of the Russia-based Tobacco Manufacturer’s Association, Tabakprom, said his organization is not entirely against the proposed legislation. Echoing BAT’s statement, however, he criticized the bill’s proposal to set a minimum price on cigarettes as well as boost the excise duty by nearly 50 percent. On average, cigarettes currently cost just $1.50 per pack.

“If the prices are too high, it will simply disturb the balance of the market,” Zhelnin said Wednesday.

The bill has already been endorsed by top government officials.

“The equivalent of a large city disappears off the map each year because of tobacco,” he said.

Medvedev also railed against foreign tobacco companies for the marketing strategies they pursued in post-Soviet Russia, which he said led to the proportion of women smokers rising from 7 percent in 1992 to 22 percent in 2010.

President Vladimir Putin, a keen sportsman who has long advocated a healthy, active lifestyle, also backs the bill. The Kremlin has also hammered this message home through its sponsorship of youth groups and other social organisations.

The government even offers financial incentives to families with more than one child in an effort to fight Russia’s population drop. But some experts doubted that support, even at this level, can break Big Tobacco’s hold over Russia’s legislative process.

Danishevsky, the anti-smoking activist, pointed to a law adopted in 2002, banning smoking in public places, which included the phrase “except in designated areas.” This caveat, he said, offered lobbyists an easy loophole.

“There are a lot of lobbies that come up with various corrections and amendments and small changes in wording, making it totally ineffective,” he said.