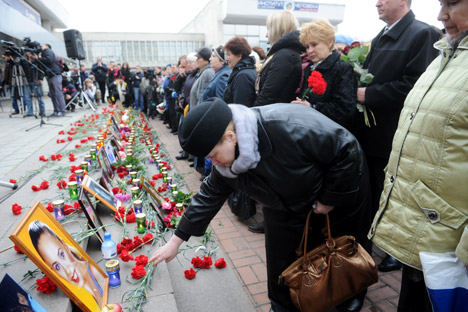 One of the lessons of the Dubrovka hostage crisis is that after this terrorist act, even the most naïve people lost their last illusions about “fighters for Chechnya’s freedom.”

10 years ago, one of the most large-scaled terrorist acts in modern history took place in Moscow. Several dozen terrorists from Chechnya, headed by a certain Movsar Baraev, besieged a theatre in the Moscow district of Dubrovka, where, at the moment, a musical show called “Nord-Ost” was on. They took hostage 916 people and demanded that Russian forces must leave Chechnya.

Of course, the authorities refused to fulfil this demand. Instead, they tried to save the hostages by attacking the captors. As a result, more than 700 hostages were freed, but 130 others were killed. But all the terrorists were killed too.

Some people may say that the deaths of these 130 hostages are a too high price for the freedom of others – and, probably, they are right. But if the special forces did not attack the terrorists, the consequences might have been much worse.

The militants had obviously prepared very well for this terrorist act. It has turned out later that the act was organised by Aslan Maskhadov, one of the leaders of Chechen separatists.

“I believe that now that 10 years have passed since the tragedy in Dubrovka, everyone has drawn lessons from it,” veteran of Russian special forces Lev Korolkov says.

“The main lesson is probably that the special forces might have freed the hostages without so many losses,” Lev Korolkov continues.

“Some details of this sad story still raise many questions. The fact that the terrorists came to Moscow not directly from Chechnya but from St Petersburg means that some people had covered them in St Petersburg.”

“At that time, our special forces had no experience of how to deal with such a large-scale capture of hostages. We lacked ambulance cars to send people to hospitals. Now, we have become more experienced, more professional and better equipped.”

Political analyst Rustam Vakhitov says: “I believe, the main lesson of the Dubrovka tragedy is that such terrorist acts are a price we have to pay for democracy. Under totalitarian regimes, things like that are impossible. But this doesn’t mean, of course, that I am against democracy.”

“In my opinion, this tragedy revealed the weakness of the authorities and the special forces,” Dmitry Milovidov, whose daughter was killed as a result of this terrorist act, says. “From the point of view of international norms, it cannot be said that the actions of the special forces were very professional. Too many hostages were killed. But it should also be noted that now, the authorities have drawn a lesson from this tragedy.”

It would be wrong to say, however, that all the hostages died as a result of the authorities’ or the special forces’ unprofessional actions. Some of them died of shock, some of hunger, some of lack of fresh air.

The authorities’ actions may not have been very professional – but, after all, the main guilt for the deaths of innocent people lies not on the authorities, but on the terrorists.

One of the lessons of the Dubrovka tragedy is that after this terrorist act, even the most naïve people lost the last illusions they might had had about “fighters for Chechnya’s freedom” and their leader of that time Aslan Maskhadov. These “fighters” are not heroes, and even to a lesser degree they are martyrs. They are mere bandits and terrorists. The fact that their action, which every normal person would find criminal and inhuman, was praised by the notorious Osama Bin Laden leaves no doubts concerning who backed these “heroes.”