The one who got away 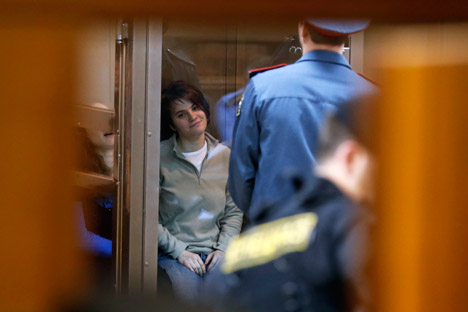 The jail time, released-Pussy Riot member Yekaterina Samutsevich says, wasn’t particularly gruelling. “Your whole schedule is spelled out. Everything is under the control of the administration.”

Yekaterina Samutsevich has encountered so many normal people in jail that she has begun to think the government might be doing it on purpose – in some twisted magnet programme to mix criminals with educated political prisoners.

“I had a lot of cellmates in for economic crimes, under article 159, and of course a lot of [their cases] sounded fabricated,” the Pussy Riot member told The Moscow News in an interview just over a week after being released on a suspended sentence, while band members Nadezhda Tolokonnikova and Maria Alekhina remained to serve out their two-year terms in a colony.

“It’s hard to tell when a case is fabricated – our laws are such that you can’t tell,” Samutsevich said. “Everyone’s guilty, but someone decides who will go to jail or not. In our case, everyone’s rights are violated, and everyone is guilty.”

She described two women in jail on economic crimes – one had been convicted for being swindled into accepting a fake registration to get a loan, another was a mid-level accountant who had kept silent about the alleged fraud going on in her firm – where almost everyone was arrested when it was taken down.

Russian justice as a magnet programme, a social experiment to mix up irreconcilable strata of the population, is not a new concept. Writers have tried in on for size to find meaning in past repressions that make today’s tightening of the screws sound like a Norwegian prison.

But for Samutsevich, who insists she never imagined to wind up in jail over Pussy Riot’s punk prayer in Christ the Saviour Cathedral, it was a tempting explanation.

She wasn’t afraid, she said, when President Vladimir Putin first condemned their actions in March.

“We live in the 21st century, after all, we weren’t prepared for anything wild,” she said.

The jail time, she says, wasn’t particularly gruelling. “Your whole schedule is spelled out. Everything is under the control of the administration,” she said.

But she liked the kasha. “Breakfast is cereal – sometimes with milk, sometimes with water. It was good. Lunch was soup, maybe peas or potatoes. I actually liked the food. Dinner was at about six, similar to breakfast, also cereal.”

Throughout the interview, it appeared that Katya – as she has become known to the world – was either not wanting to give the full picture, or wasn’t at liberty to talk. This was understandable, as two of her friends remain behind bars, and the blogosphere talk of a schism between members of the group has been downright hostile. But the key mystery in the Pussy Riot affair was why Samutsevich had switched lawyers – something she was loath to comment on.

“I don’t want to get into detail about that,” she said. “It’s not because we decided to change our line of defence.”

Indeed, Samutsevich’s defence has not changed – she still insists that what the girls did was a civic act of protest, not a crime, and not aimed at inciting religious hatred.

But her illustrations of what she thought was going on in the country sounded toned down – and at times clashed with what her previous lawyers had said in the past.

“We knew that we were being monitored by Centre E (the Interior Ministry’s anti-extremism department), we believed it was possible we were being discussed at the FSB level,” she said. “But I don’t believe that Putin himself watched those clips – I don’t think he was paying that much attention, nor did we want it. The attention wasn’t for what we did, but for what the government did by launching a criminal case.”

Samutsevich was as surprised as the observers of the trial when she was released in the courtroom Oct. 10 – no one, she says, tried to cut a deal with her. According to her current lawyer, Irina Khrunova, her appeal statement was like buying a lottery ticket – she didn’t know what effect it would have until the Moscow City Court decided to change Samutsevich’s sentence to probation.

On the surface, there was a simple reason – Samutsevich never got the chance to get her guitar out and actually perform the punk prayer.

“The investigator told us that if we plead guilty, admit our guilt, that they will think about it. They never said repentance, of course, but they’re playing on that connection between the criminal code and religious culture,” Samutsevich said.

But Samutsevich never pleaded guilty, because she continued to refuse calling what Pussy Riot did a crime.

According to Volkova and Polozov, they were given indication of leniency for the entire group just ahead of the appeals hearing – suggesting that some shift had indeed occurred in the line that Russian justice had taken on Pussy Riot.

But Samutsevich’s own explanation was philosophical.

“Maybe (the government is) trying to get away from this absurdity, maybe they’re trying to bring back at least a modicum of lawfulness,” she said of the court’s decision to release her on probation.