Who needs the Kremlin Cup? 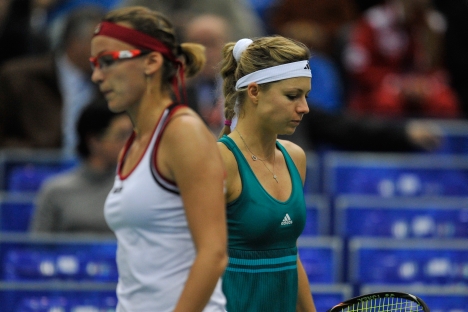 In its current shape, the Kremlin Cup is useless to both the players and the fans. The lack of exciting matches and the exorbitant ticket prices critically undermine the tournament’s chances of survival.

This year’s tennis tournament in Moscow recently got underway. Each year, however, list of competitors noticeably diminishes in distinction. This is especially true of the men’s competition: the top player this year is Alexander Dolgopolov of Ukraine, who ranks 21st in the world.

Sharapova grinds out win over Kvitova, into Aussie final

The blame lies squarely with the tournament’s organizers. Yevgeny Kafelnikov, now vice president of the Russian Tennis Federation, was tasked with bringing in the stars of world tennis. He admitted that, for Roger Federer or Rafael Nadal, the tournament prize money was considered “ridiculous” — those players expect at least double the amount.

It is clear that the top echelon of world tennis will not be appearing in Moscow just yet. Attracting Russia’s number one, Mikhail Youzhny, should be a much simpler affair; but even he will not be gracing the stage in Moscow this year, since he will be on the court in Stockholm. Youzhny's trainer, Boris Sobkin, said that it was not a question of money — Mikhail was not even invited to the tournament.

From a marketing point of view, Youzhny's absence is a slap in the face for the Kremlin Cup, and the underwhelming list of male competitors is a serious blow to the tournament's reputation.

The women’s tournament fares slightly better, but will not feature top-ranked Maria Sharapova, who is busy preparing for the final tournament of the season. Svetlana Kuznetsova and Vera Zvonareva will also be absent due to injury. While female names have more pull, they cannot rescue the situation without their male counterparts. The Kremlin Cup, which takes place in the Russian capital, really has no right to exist in such a format.

Despite the absence of any worthwhile spectacle, ticket prices for the tournament continue to rise every year. A half-decent seat will set spectators back a few thousand rubles. The cheapest ticket for the final is 300 rubles ($10), but the binoculars that would then be necessary cost more.

A correspondent for Gazeta.ru paid a visit to the Olympic Stadium and found the entertainment offered to be woeful — there was no hope of compensating for the lack of quality on the court. Scattered up and down the spacious corridors of the huge sports complex were tents with sponsors offering or advertising services. These same sponsors dwindle more and more as the years go by, which is hardly surprising.

There is not much to set pulses racing. Fans of autographs could buy a large tennis ball for 950 rubles ($30) and try to get player autographs. Adults, along with the teenagers and children, kept busy in this way: with nothing exciting to watch on the court, there was simply not much else to do.

A decent lunch at the right price was also off the menu. Firstly, it was expensive; and secondly, the choices were scant.

“I always go out to the Kremlin Cup. I love tennis and used to play, but what’s been going on in recent years is very sad,” a visitor said, holding the hand of his 9-year-old son. “I came here with my son and bought two tickets — spent money, but saw nothing. I know: if I don’t like it, why watch it?  But why should I give up on my native Kremlin Cup, when I’ve grown used to it? If the organizers don’t have enough money to attract the stars of world tennis, they should work with the sponsors to remedy things.”

“If changes don’t occur, next time I might look elsewhere for family entertainment,” said the father and tennis fan, before he headed off to watch the conclusion of the match between Yevgeny Korolev and Richard Murzaev.