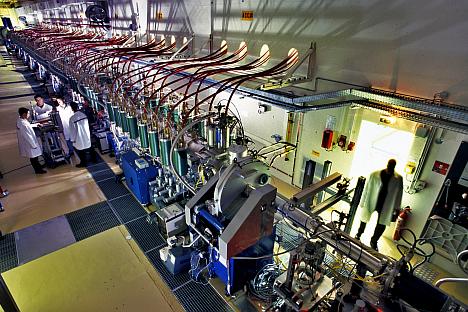 In the late 1980s, an agreement was reached to ban launches of satellites with nuclear propulsion installations. Source: East News

Bench tests of a reactor for a nuclear-powered spacecraft may start in Sosnovy Bor near St Petersburg as early as next year.

The dream of Sergei Korolev, Wernher von Braun and their predecessors to design a powerful engine for long-term space flight missions may soon come true. Roscosmos Head Vladimir Popovkin has announced that the engineering prototype of a megawatt-class nuclear propulsion unit for outer space missions will be developed in Russia in 2017.

Bench tests of a reactor for a nuclear-powered spacecraft may start in Sosnovy Bor near St Petersburg as early as next year. In June 2010, then-President Dmitry Medvedev issued an instruction backing the project of a space transport and power module based on a megawatt-class nuclear power installation.

The president promised 17 billion roubles to implement the project in 2010–2018, 7.245 billion roubles of which were earmarked for Rosatom to build the reactor. The M. V. Keldysh Research Centre will receive 3.955 billion roubles to create the nuclear propulsion unit, and the remaining 5.8 billion roubles will be used to finance the design of the transport and power module by the Rocket and Space Corporation (RKK) Energia.

The United States and the USSR started working on nuclear rocket engines back in the 1960s. “The original task was to create rocket engines that would heat hydrogen to about 3,000 degrees rather than burn fuel and oxidise materials,” says Russian Academy of Sciences member Anatoly Koroteyev, who is the general director of Keldysh Centre and head of research of the transport and power module project. “But that direct method proved to be inefficient. We occasionally got more traction, but the jet stream the engine emissions can be radioactive if the reactor fails.”

According to Koroteyev, there were two critical parametres: the extreme temperature and release of radiation. Neither Soviet nor American specialists were able to create reliable engines then. They failed to respond to the main challenge, which was to heat hydrogen in a nuclear reactor to 3,000 degrees. “We suggest a different approach,” Koroteyev says. “It is different from the old approach in the same way a hybrid vehicle is different from a regular car. In the latter, the engine spins the wheels, whereas in a hybrid car, the engine generates electricity, which sets the wheels in motion. In other words, there is an intermediary power plant.”

The idea of nuclear-powered spacecraft is not new and was first spoken about in the 1960s by Russian Academy of Sciences researchers Mstislav Keldysh, Sergei Korolev and Igor Kurchatov, the top executives of the Soviet space programme and the Soviet Nuclear Project. The United States also carried out research into nuclear engines to create new types of weapons. But nuclear engines never made it into space. Although the Soviet Union launched 32 space vehicles with thermoelectric nuclear power installations (where disintegrated energy transformed into electricity) to various orbits from 1970 to 1988, such propellants had relatively low power and limited operating life and de-orbited, raising concerns of land monitoring systems, which had to pinpoint the location of radioactive debris.

Russian researchers propose a method whereby the reactor does not heat the jet stream released from the engine, but instead generates electricity. The hot gas from the reactor spins the turbine and the turbine spins the generator and the compressor, which provides the closed circuit circulation of the propellant. The generator produces electricity for the plasma engine with a specific thrust 20 times higher than that in a chemical engine.

“The key advantage is that the jet stream coming from the new engine is not radioactive, because the working substances in the reactor and the closed circuit are different,” says Koroteyev. “Furthermore, this method spares us the need to heat hydrogen to extreme temperatures: the inert working substance in the reactor is heated to just 1,500 degrees. Yet, we manage to increase the specific thrust not twice, but 20 times compared to chemical engines.”

Koroteyev said that the Americans were quite interested in the project. “China may redouble its efforts to catch up, so we have to work fast, and not just so we can be half a step ahead. We need to work fast in order to have a say in international cooperation, which is de facto developing now.”

Koroteyev does not rule out the possibility of an international programme being initiated in the near future to develop a nuclear-powered spacecraft similar to the controlled nuclear fusion programme.