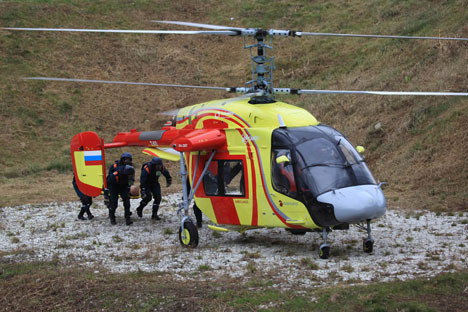 The deputy chairman of the Moscow Region government Timur Ivanov, in turn, said that along the Moscow Ring Road there would be no less than 10 helipads, “which will be used to collect and drop off passengers of light aircraft.” In addition, the region’s government plans to reconstruct two airfields within 20-30 kilometres of Moscow and involve some 15 Moscow Region airports to arrange local air transfers.

The ambitious aviation arrangements may turn out to be just pie in the sky, thanks to another traffic alleviation measure, however. Last week, the press office of Prime Minister Dmitry Medvedev announced that he now uses a helicopter to visit sites around the capital as much as possible, and not ground transport. In connection with this, helipads are being planned for near the White House. President Vladimir Putin has already been availing himself of helicopter services for some time.

Above the traffic jams

These high-flying politicians’ aerial expeditions come with a price for other air travellers.

“Do not forget about the fact that if someone from the leadership takes off, the skies are ‘closed down,” Russkaya Sluzhba Novostei quoted an aviation source as saying on Wednesday. “There were traffic jams on the ground, now they are in the air. The skies are ‘closed’ for a radius of 100 kilometres. I spend 40 minutes sitting on the ground, and if I'm in the air, the air controller sends a command to search for a site to immediately land.”

He added that the situation became worse some two to three weeks ago, roughly when press reports first announced that the prime minister’s new aviation excursions were being launched.