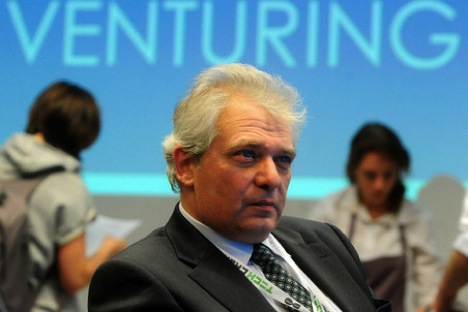 Igor Agamirzian, the CEO of Russian Venture Company, speaks about how exactly Asian venture capital investors can be made interested in Russia. Source: ITAR-TASS

Russia and its CIS neighbours surpassed Africa to clinch the 5th spot on the list of most attractive emerging-market regions according to the Capital Confidence Barometer, released by Ernst & Young.

Igor Agamirzian, CEO of Russian Venture Company (one of the development institutions set up by the Russian government), speaks to RIR about how exactly Asian venture capital investors can be made interested in Russia.

What does Russia have to offer Asian investors?

In a modern economy, the value added centre inevitably shifts towards R&D away from production. In other words, it is the R&D office that has become the main productive force, rather than the worker, engineer or plant.

Russia’s main resource is not raw materials, oil and gas, but people’s brains. Russia is one of the few countries in the world with a self-reproducing system for training highly-qualified personnel. Back in Soviet times, Russia was the global leader in terms of literacy and competence and, although the figure has gone down a bit over the last 20 years, the literacy level is still higher than in any of the developing economies. It can easily compete with any developed nation.

Russian universities train world standard professionals and it is for good reason that transnational corporations eye Russia not only as a sales market but also as a centre of engineering resources.

We prioritise investments in projects for creating intellectual property, high-tech non-production businesses. It is time to bring this home to Asian business.

Investors have been showing an intense interest in working on the Russian market over the last two or three years. In 2011 alone, foreign venture capital investments in Russian companies that create intellectual property amounted to more than $500 million. On the other hand, because this is a special market, the quality of investments is not always good. Money is often invested in projects that have already been adopted on foreign markets for business ideas, rather than in the Russian projects that have a good breakthrough potential.

So it is all about adapting a foreign project to the Russian environment?

It could be called adaptation to some extent; yet, technologically, these are new developments. But it is business that defines technology, not the other way round. If a business idea has been given a run, it becomes less risky, but has no breakthrough potential for approaching the global market.

On the other hand, some Russian companies, such as Mail.ru and Yandex, have made IPOs during these years. This provided important incentives – investors need to reckon with Russian technology companies. Investments are flowing into the country – available venture capital has more than doubled over the last two years.

Nevertheless, this is almost nothing compared to the venture investment market in China.

Do American, European and Asian venture capital investors have different interests in Russia?

Modern markets are global markets; some specific investors have professional preferences – they prefer investing in the sectors they know well.

Technological development areas are quite clearly divided now and they are identical for all investors. The most important one is IT and the Internet, which accounts for almost half of all investments in developed economies, including in Russia.

It is followed by the market for biotechnologies and life science, genetics and pharmaceuticals. The third focus area is alternative energy and green technologies; it is developing at a very high pace elsewhere in the world but remains underrated in Russia.

When it comes to the Internet, in Russia it is less interesting to the Chinese because of their language system. There are two countries in the world where Google is not the absolute market leader (among search engines – RIR): Russia and China. So, it would not be feasible to transfer these technologies to China or vice versa for language reasons.

What recent regulatory changes should Asian investors consider when eyeing investments in Russia?

A task has been set of creating new highly productive jobs in Russia. Twenty-five million new jobs is a lot, about a third of the entire economy. This is a major change for the entire economic structure.

Another challenge is to move Russia up from place 120 to 20 in the Doing Business rankings, which is expected to improve the business environment dramatically. These things need to be taken into account. They won’t be completed in a year or even five years; but the President has set the government very ambitious tasks.

Will Russia’s accession to the WTO influence the venture capital business in Russia?

I don’t think that the accession to the WTO will affect the R&D business. The barriers are not that high there, specifically, the customs barriers, including in the sectors with a high share of physical products. Many companies work exclusively with services and export of services is not subject to VAT or customs duties.

The R&D business is more globalised than any traditional business integrated into the economy. So I don’t expect that the WTO accession will have any serious impact on it.

Russia has recently hosted the Global Innovation Partnerships 2012 forum. Which of its results were crucial for promoting cooperation with Asian venture capital business?

The main thing is to build up awareness on the part of our potential partners.

We fail to provide sufficient information. Russia is a blank spot on the information map of the world. No one has any reliable market analysis on Russia; there are some studies on separate sectors receiving Russia as an outlet. But when it comes to technology exports to the global market, there are no analytical studies whatsoever.