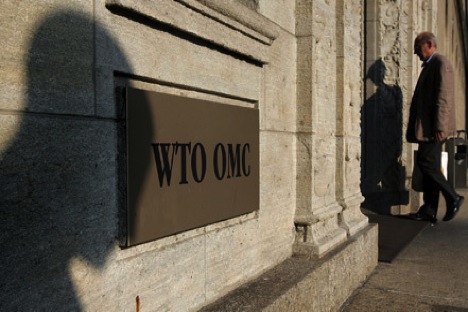 Entry into the World Trade Organisation helped to improve the ranking. Source: ITAR-TASS

Russia and its CIS neighbours surpassed Africa to clinch the 5th spot on the list of most attractive emerging-market regions according to the Capital Confidence Barometer, released by Ernst & Young.

When Prime Minister Dmitri Medvedev took the podium at the Customs and Business Conference on Tuesday, he spoke about tweaking customs rules as one way to improve the business climate.

The speech was a timely one, coming just after the release of the 10th annual Doing Business report, which ranked Russia 162 out of 185 countries in terms of trading across borders. Experts say attention to such rankings by high-level officials is one of the reasons the business climate is improving, but much more work needs to be done before Russia becomes a top destination for investors.

Russia is slowly climbing up the rankings in terms of investment attractiveness. The country and its CIS neighbours surpassed Africa to clinch the fifth spot on the list of the most attractive emerging-market regions, according to the Capital Confidence Barometer, which Ernst & Young released this week. This places them behind Asia, China, India and Latin America.

A panel survey of 100 private equity investors provided the information for the Ernst & Young rankings. A quarter of respondents said they will increase acquisition activity in Russia over the next year, 54 percent said activity will remain the same, and 21 percent said it will decrease.

Russia has become more attractive to private equity investors because of its strong potential for growth, strong consumer spending by the emerging middle class, cost-competitive labour force and shrinking unemployment, the study said.

Entry into the World Trade Organisation also helped to improve the ranking.

“However you look at it domestically, whether it is bad or good, for foreign investors, Russia's accession to the WTO is an automatic plus,” said Leonid Savelyev, partner at Ernst & Young.

There have also been improvements in the business climate. The country moved up six spots to 112th place in the Doing Business ranking. The move was made possible by changes in tax legislation — paying taxes now takes 177 hours, in comparison with the 290 hours the process took last year — and easier procedures for obtaining construction permits, according to the report.

Despite business climate improvements, however, experts caution that it is still too early to celebrate.

The country remains in the bottom half of the Doing Business ranking. It has a particularly poor showing in the categories of construction permits and electricity hookups. In the latter, it beat out only Bangladesh.

“This is not very bad, but it shows that it is hard for Russia to compete with analogous countries, such as [counterparts among] the BRICS,” said Dmitry Dolgin, macroeconomics analyst at Alfa Bank.

The results are also not good news to President Vladimir Putin, who has declared that Russia will be in 20th place on the Doing Business ranking by 2018. Given its current standing, the country would have to climb 15 spots each year to meet this goal.

Corruption and a lack of transparency in the political and legislative processes are some of the key barriers to private equity investors, according to the Ernst & Young study.

What is also needed is a reduction in the negative statements by the Western press and financial experts that Russia is bad for investment, Savelyev said.

Savelyev said he met one foreign financial expert recently and was frustrated to hear him use the stereotypical words when talking about Russia: Khodorkovsky, Magnitsky, Pussy Riot.