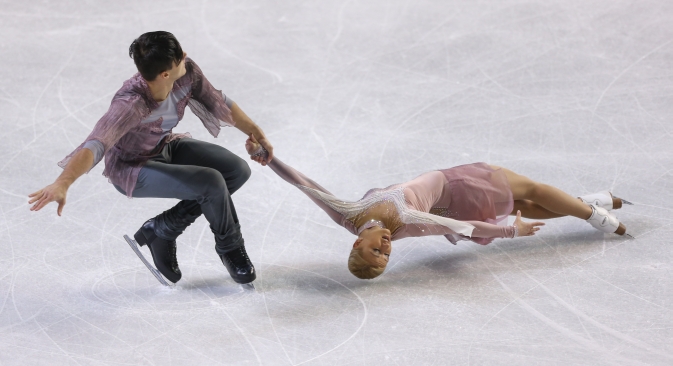 Despite the medals they won, neither the Russian skaters nor those from other countries executed ideal performances in Seattle. For example, Japan’s 17-year-old bronze medalist at the World Championships, Yuzuru Hanyu, performed excellently in the short program, where he set a new world record with 95.07 points; but he failed the free program, after falling three times during his jumps.

“It’s still good that it turned out this way for us,” said coach Nina Mozer, commenting on the success of her protégés Tatyana Volosozhar and Maxim Trankov. The Russian pair finished 9.91 points ahead of their Chinese rivals Qing Pang and Jian Tong. The Russian pair put all their difficult elements into the second part of the free program, and the risk paid off.

“We felt a bit out of sorts in Seattle. It was probably the first time we had such serious problems with the schedule and with acclimatization,” Mozer said. Trankov even admitted that they were terribly nervous before the short program, which was where the pair made the lion’s share of their mistakes.

“We just can’t get over the fright we had after the short program at the World Championships in Nice,” said Trankov, recalling the venue where his partner fell during a death spiral element. “But there are no such problems with the free program.”

The competition was dominated by the favorites, Americans Meryl Davis and Charlie White, who were silver medalists in ice dancing at the Vancouver Olympics and 2011 world champions.

The Russians Ekaterina Bobrova and Dmitry Solovyov were competing for second place with Canada’s Kaitlyn Weaver and Andrew Poje. Bobrova and Solovyov – pupils of Alexander Zhulin – snatched silver from Angelika Krylova’s protégés, with a minimal lead of 2.63 points and thanks to a beautifully executed free dance.

On the eve of their start in the U.S., Bobrova and Solovyov also barely defeated the well-known Italian pair Anna Cappellini and Luca Lanotte in Finland. According to their second coach, Oleg Volkov, the Russian pair has since managed to amend their program, which is especially notable in the step sequences. “One way or another, they haven’t exhausted their potential and they’ve got the strength to go on for a long time,” Volkov said, optimistically.

But there’s no clear explanation for the disappointing showing in Seattle from Alena Leonova, women’s singles world championships silver medalist. Her poor performance at Skate America threatens to keep her out of the Grand Prix final in Sochi.

The figure skater’s coach, Nikolai Morozov, was not in the U.S. at the time but in Italy, where his ice dancing protégés, Elena Ilinykh and Nikita Katsalapov, were appearing in a show. Meanwhile, Alena Leonova could only manage a double axel out of three jump elements in the short program. Lenova was left in ninth place, and seventh overall for the two programs.

On the other hand, Adelina Sotnikova, a student of Elena Buyanova, achieved her objective of placing into the top three. After the short program, in which Sotnikova performed a single flip instead of a triple, she was just 1.5 points behind the leader, American Ashley Wagner. In the free program she managed a triple lutz-triple toe loop cascade; but a fall in the flip and an extra cascade meant a third-place finish behind another American, Christina Gao.

The Russian figure skater Konstantin Menshov performed a double lutz instead of a triple in the short program and failed to complete one rotation in the triple salchow; he was left one step short of the podium at the end.

Nevertheless, according to coach Evgeni Rukavitsyn, the former champion of Russia skated both programs quite well, with two quadruple toe loops in the free program. Rukavitsyn believes Menshov made the most of the situation and achieved what he had set out to do.