The cost of APEC’s fireworks 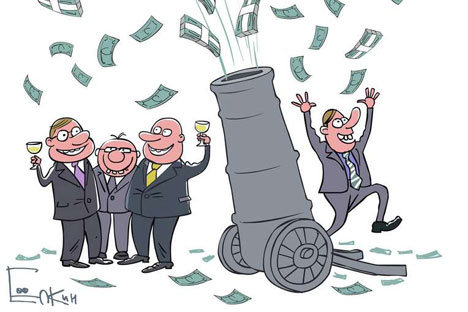 The recent APEC summit in Vladivostok cost Russia in excess of $21 billion, which is more than 5 percent of the country’s budget. Such extravagance has once again raised the question of how “effective” big events actually are for the country. This is all the more apparent as Russia, having completed the APEC summit, is getting ready for new state “hyper-projects”, including the Summer Universiade in Kazan in 2013, the Winter Olympics in Sochi in 2014 and the FIFA World Cup in 2018.

When it comes to large-scale “image-making” projects, it is not only politicians who are interested in how much the organisers are making. For example, a number of economists have recently turned their focus to “football economics,” looking to answer the question whether a host country really profits from holding global football events. Football is essentially a game of chance, where any given team can win on any given day. There is no room for impartiality. Researchers can easily show that the host country’s investments do not pay off or conclude that football championships are highly profitable. They can also prove that it is utterly impossible to evaluate the benefits of the further use of the infrastructure developed for a big event.

The APEC summit in Vladivostok is a perfect example of how emotions are stirred around a big event. Let’s take the 2008 Summer Olympics in Beijing as an example. More precisely, let’s take the investments of the Chinese Government and other financial backers in the high-speed railway project rather than Beijing’s preparations for the event itself.

The new Chinese trains were not essential for the Olympics. China could have done perfectly well without them. In the same vein, the Russian gas pipeline connecting Sakhalin and Vladivostok that was built for the APEC summit was not critical to the event. There is no guarantee that the Chinese high-speed railways project will pay off, and the same holds true for the reconstruction of the Vladivostok utility infrastructure. The Chinese Government will never be able to reap profits from investments, where it spent tens of billions of dollars, unless it puts on a good face and makes use of a few easy budget manipulations to cover up the losses.

Incidentally, the rumours about the government’s huge cash injections into Vladivostok are grossly exaggerated. In the spring of 2012, First Deputy Prime Minister Igor Shuvalov commented on the money invested in Vladivostok over the last three years. This includes money from the state budget, state companies, the municipal authorities and even private investors. If we add a couple of those facilities that are under construction near the main Pacific port of Russia (military facilities, for example), then that figure can be doubled.

After the actual summit, it was reported that Russia had spent $28 million on the event, the same amount that the United States spent on the previous summit in Hawaii. Meanwhile, even ultra-liberal governments are prepared to invest in big events, no matter big the risks are.

Most of the reforms in Georgia from 2003 to 2012 were presented as big events and they were always destined to lose money. The state-of-the-art bridge in Tbilisi was announced as the first “project of the century,” before that status was given to the new administrative quarters in the capital city, then to the complete reconstruction of the sea resort of Batumi, the new railway and, finally, to the new parliament building. The most recent initiative by President Saakashvili was the construction of a new town, Laziki, from scratch. A few days into the project, his party failed to win the parliamentary elections. It looked like voters never forgave his excessive zeal for including the government in big events: Georgia really cannot afford them.

The question of whether the state should finance rail giant Russian Railways’ project ahead of the 2018 World Cup has become one of the most heated discussions surrounding the Russian federal budget for the period 2013–2015. Russian Railways want to do what China has already done, that is, they want to build a high-speed railway – one that stretches the length of the European part of the country, almost to the Urals. It won’t pay in accounting terms, but it is being discussed now.

One of the hottest topics in the debate over the Vladivostok summit was the amount of money that was literally wasted. For example, the grandiose fireworks in Vladivostok cost millions of dollars. The fireworks became a cost that would never show a profit; it was rather an investment in emotions that will remain in people’s memory.

Will investments in emotions eventually pay off, even if we forget the fact that emotions are related to politics and are employed by governments in their political games to stay afloat? Does the government lie to society when it spends money on emotions, or does society get something more than positive feelings?

I don’t think we are talking about lies here. Economists don’t have instruments to gauge the social and cultural contributions of big events. It’s not even about the things that can be measured after big events: the increase in the number of English-speaking staff, new investment opportunities in the areas with new power grids and roads, enlarged hotel and port capacity.

There are more significant impacts that are harder to assess. In the case of Vladivostok, these are expectations. In monetary policy, the impact of “inflation expectations” is well known; but they still need to learn to measure it in the economics of territories. An area that has seen a very big, expensive and complex economic project successfully completed, quite inexplicably starts generating its own projects at various levels.

It may all be about big events breaking cultural barriers in business. Or about the one-time shock to the local economy that can push it into a new developmental trajectory from a state of depressive equilibrium. Or, possibly, the impact is provided by the surge in economic contacts of the region beyond its borders – a Big Event is impossible in a closed environment. But it does work, albeit not everywhere and not always, with unpredictable consequences and uncommon side effects.

Therefore, when commenting on the APEC summit in Vladivostok, I’m trying to keep the fireworks in mind, since it may all be about the fireworks.