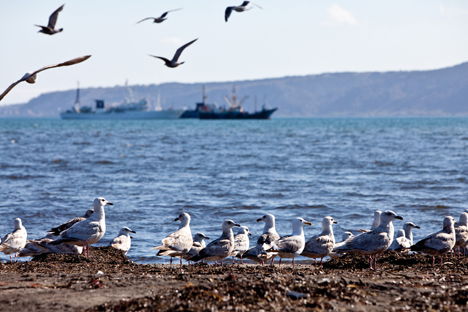 Neither India nor Russia has a “bloc mentality” and cannot conceivably form any alliances in the region, nor can they afford to remain detached as passive onlookers since vital interests are at stake.

India and Russia are manifestly lavishing attention on a constructive engagement of Japan in the security and defence fields. The recent days saw hectic parleying, and there is more – much more – to come in the coming weeks.

The thrust of the dialogue is bilateral but the backdrop is regional – emergent tensions in the Asia-Pacific arising out of China’s territorial disputes with several countries and the United States’ “rebalancing” in Asia, as well as a host of attendant issues that stem from them. Neither India nor Russia has a “bloc mentality” and cannot conceivably form any alliances in the region, nor can they afford to remain detached as passive onlookers since vital interests are at stake.

The past week saw the India-Japan engagement at the official level within the so-called “2+2 Dialogue” format. The talks were held in Tokyo on Monday. The two sides discussed their respective defence and security policies and the ways of expanding cooperation.

The India-Japan format has surged ahead of the Russia-Japan dialogue on defence and security issues, which also commenced this week but is a nascent process in comparison. The visit by Nikolai Patrushev, Secretary of Russia’s Security Council (which is headed by President Vladimir Putin) to Tokyo formally kick starts a security and defence dialogue at the working level. The two sides have concluded a protocol outlining the parameters of cooperation. A visit by Russian defence minister Anatoly Serdyukov to Japan is on the cards.

Japan paid great attention to Patrushev’s visit. He met the Japanese prime minister, foreign minister and the defence minister during the 3-day visit. The view from Moscow is that the Russia-Japan engagement has a broad vista.

The two sides have agreed to hold substantive talks on resolving their long-standing dispute over the Kuril Islands dating back to World War II. The prospects of economic cooperation have brightened, especially in the field of energy. Russia is also keen to attract Japanese investment and technology for the upgrade of its economy. Japan has evinced interest in developing the infrastructure of Siberia and the Russian Far East. A visit by Japanese Prime Minister Yoshihiko Noda to Russia in December is on the cards.

Meanwhile, India and Japan also have on the anvil the visit by Prime Minister Manmohan Singh to Japan in November. Interestingly, the next meeting of the trilateral US-India-Japan dialogue is also slated for next week in Tokyo.

This “trilateral” is a new format of diplomatic engagement, which was a brainchild of the US. It enables the US to “build consensus around policies with friends and allies”, as an American analyst noted.

The US and Japan have another “trilateral” with Australia. The big question ahead will be whether the two “trilaterals” will now merge to form a grand “quadrilateral”.

A sticking point so far has been the umbrage that India took at Australia’s refusal to export uranium to it. Now that Canberra has unceremoniously caved in, Australia-India relations are raring to go.

Japan happens to be in the eye of the storm building up in the Asia-Pacific, as its recent tensions with China testify. Nonetheless – or because of it –India and Russia are intensifying their security and defence ties with Japan.  The troubled times in regional security cannot be lost sight of.

At the same time, India and Japan have no problems at a bilateral level. Whereas, Russia has the lingering territorial dispute with Japan to resolve and recently Moscow also voiced disquiet over the deployment of components of the US’ missile defence system in Japan.

Having said that, both India and Russia have taken broadly similar positions vis-à-vis China’s territorial disputes with its neighbours in the Asia-Pacific. Notably, Patrushev yesterday went on record publicly while concluding his talks in Tokyo after meeting the Japanese prime minister, foreign minister and the defence minister that “Russia will not take sides in this [Japan-China] dispute.” Beijing’s reaction is not yet known.

To be sure, both New Delhi and Moscow sense that the power dynamics in the Asia-Pacific is shifting. Their intensification of security dialogue with Japan underscores that they are making adjustments accordingly.