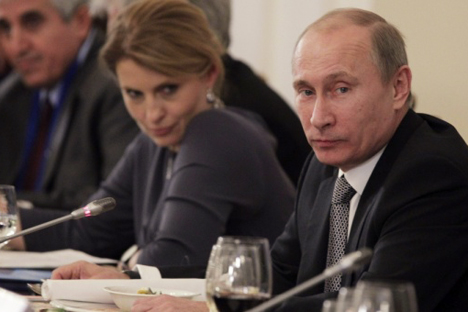 When presented with the recommendations from Valdai Club discussions on how an institutional reform is needed in order to speed up the country’s economic growth, Putin took them in stride.

If there had been any expectations among Russia watchers of “a new Putin” coming back to the presidential office after the elections, they must have been finally put to rest after the Russian president’s meeting with a group of political scientists and economic experts known as the Valdai Club.

Several participants interviewed by telephone after the meeting, which took place in the presidential Novo-Ogaryovo residence outside of Moscow, said Putin was looking at the present situation in the country and the Kremlin’s policies simply as a continuation of his past successes.

“In his head, the future is largely an extension of the past since 2000,” said Timothy Colton, chairman of the Department of Government at Harvard University. “I think he is still living in that world. ‘We did the right thing, it had to be done, it worked out well, and so, we’ll more or less keep on doing it with, of course, adjustments and fine tuning.’ It seems to be reaffirmation of the previous course and he seems to be this year very calm and confident about it.”

Colton had much to compare with. It was the ninth time Putin was talking to the group of political scientists, retired diplomats and select journalists who meet annually in one of Russia’s regions to discuss a specific Russia-related topic and hear an update from Russian officials. This time around, the session began in St Petersburg on Monday with discussions of Russia’s economic scenarios, and continued in Moscow on Wednesday, when the group met with Sberbank Chief German Gref, Economic Development Minister Andrei Belousov and Presidential Aide Arkady Dvorkovich and culminated with a traditional meeting with Putin.

Although the organisers attempted to slightly change the format of the meeting by having moderators from among the participants to group questions from their peers into broad subjects, it was largely the same type of a question-and-answer session lasting more than two hours, albeit somewhat losing steam. Nikolai Zlobin, director of Russia and Eurasia programs in Washington’s Centre for Defence Information and popular Russian media figure, said this year’s was the least exciting meeting for both Putin and group members. “The president ended up having to give us a short lecture on the political economy,” Zlobin said.

In fact, Putin’s subjects ranged from commenting on the Rosneft-BP deal (he was not originally approving of it because it ran contrary to the government’s policy of reducing the state sector in energy business) to an in-depth evaluation of the euro crisis (it is a systemic crisis and up to the competent European bodies to resolve, but Russia is interested in a closer relationship with the EU despite the fact it will not become a member). Russia and China, Putin said, need to be moving to increase their turnover to $100 billion and begin trading in roubles and yuans rather than in dollars, which is not easy. And the Eurasian Union is taking European experience in account and thus does not want to introduce a single currency until the economic conditions and practices in its parts are more even.

When presented with the recommendations from Valdai Club discussions on how an institutional reform is needed in order to speed up the country’s economic growth, Putin took them in stride.

“He certainly recognised what needs to be done economically,” said Angela Stent, director of the Center for Eurasian, Russian and East European studies at Georgetown University. “Most of the recommendations people spoke about he agreed with. His line on all inadequacies of the Russian institutions was that he understands those problems and they are working on it.”

What made Putin really excited, however, was the topic of Pussy Riot – a female group that carried out a protest at Moscow’s main Christ the Saviour Cathedral, which was seen by many as offensive to Orthodox Christians, and two of the group were eventually sentenced to two years in a penal colony after a highly divisive court case.

“The only moment when you saw Putin angry was when he spoke about Pussy Riot,” said Orietta Moscatelli, chief editor of Italy’s TMNews press agency. “He was clearly very angry when he saw double standards in treating Pussy Riot as the rights defenders while the producer of the anti-Islam film was put in prison [in the United States]. On the eve of the day, when there is a chance that Pussy Riot would get the European Parliament’s Sakharov Prize, he was making it clear that the majority of Russians consider it logical and desirable that they should be prosecuted. He was really passionate about that.”

Colton and Stent confirmed that Putin was visibly agitated when he spoke about Pussy Riot. “The Orthodox Church is something for what people were executed in the camps and it is a sector of Russian life that has to be supported and strengthened,” Colton said relaying Putin’s point.

Moscatelli said that Putin promised a “special edition” of the Valdai Club meeting next year, when the club meets for the 10th time.

The Valdai Club is co-sponsored by the Russian state news agency RIA Novosti and the Council on Foreign and Defense Policy.