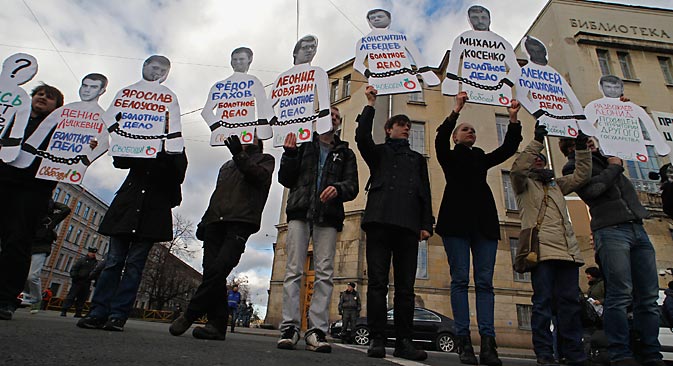 Opposition activists took to the streets in central Moscow to expess their support for those detained during the May 6 rally on Bolotnaya Square. Source: Reuters / Vostock Photo

Unsanctioned one-person protests, which were organized by the opposition, resulted in detentions. While human rights activists describe arrests as unlawful, the authorities argue that they were legal.

A series of one-person pickets took place in central Moscow on Oct. 27. Opposition activists took to the streets to protest against the detention of those who were arrested during the May 6 opposition rally. The protests were unsanctioned and resulted in new arrests of some opposition leaders.

The solitary protests brought together around 200 opposition activists near the Investigative Committee building. They were there to express their indignation about the arrest of activists connected to the riots held during the May 6 opposition rally on Moscow's Bolotnaya Square.

Police asked protestors not to stand in the way of passersby and to disperse.

The pickets had not been approved by the authorities, and the mayor's office had warned beforehand that the event would be illegal.

A spokesperson for the city police force told Interfax: “Sergei Udaltsov, Ilya Yashin and Alexei Navalny were detained for violation of public order. Administrative proceedings will be instituted against them after they are delivered to the police station.”

According to Yashin, those detained could face large fines or community service. “The police were carrying out formalities to charge the three men under a law that punishes ‘violation of the rules on the organization of a mass event’ and prescribes a fine of 20,000 to 30,000 rubles [$635-955] or community service for up to 50 hours,” Yashin wrote on his Twitter.

“I'm now threatened with a fine of 30,000 rubles, on a charge that is an absolute frame-up,” said Udaltsov.

Navalny added that he and the two others were expected in court on Oct. 30, to hear the verdict on charges brought against them on Saturday. “They are invented charges,” he said.

Yet, this information wasn’t confirmed by the city police, who had earlier surrounded Navalny and his Yashin on Pokrovka Street and forced them into a police vehicle.

Other opposition activists, supporting Navalny and Yashin, responded to their detention by chanting “Disgrace!” and proceeded further along Pokrovka Street.

With the help of megaphones, police had warned protesters that their demonstration was unlawful and urged them to disperse. Nevertheless, more civil activists took to the streets to organize solitary pickets on Moscow streets.

They stood at some distance from each other in central Moscow, holding banners. Some of the signs read the following:  “We Cannot be Intimidated,” “If We Do Not Come Today, They Will Come To Seize Us Tomorrow,” “Against Reprisals And Torture,” “Free Political Prisoners,” “Abductions And Torture Are Crimes,” and others.

Meanwhile, Udaltsov expressed fear that the charge brought against him on Saturday (“violation of the rules on the organization of a mass event”) would add up to an accusation of plotting mass riots. The opposition leader said he would definitely appeal the allegations of the police, because they are absolutely untenable. “I hope to prove my innocence,” Udaltsov said.

Moscow city government's chief security officer insists the arrests of Udaltsov,  Navalny and Yashin in the city center were legitimate, as the demonstration that they were guiding had not been permitted by the authorities.

Police warned the demonstration organizers in advance that the event would be illegal without official permission, but the organizers ignored the admonition, said Alexei Mayorov, head of the Regional Security Department. “I can confirm that we had received no application from the organizers concerning that event,” he said.

Earlier, opposition journalist Sergei Parkhomenko had said the aim of the demonstration was to express support for activists who had allegedly fallen victim to persecution. He said the event would be a chain of one-person pickets stretching from Lubyanka Square in the city center to the Lefortovo district.

“It’s police lawlessness,” she said. “There’s no other way to describe it. It’s an old story. Actually, the ‘grabbing effect’ works: they see people with familiar faces and detain them.” She expressed confidence that neither Udaltsov, nor Navalny and Yashin, had broken any law.