How one man’s “NO” saved the world 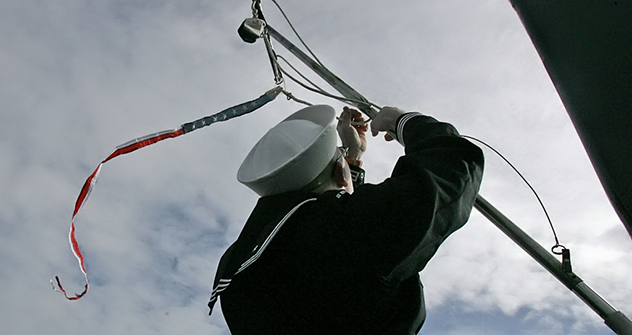 How one man’s “Nyet” saved the world. Source: Press Photo

If the earth is not an overcooked radioactive wasteland today, the credit for that goes not to Khrushchev or Kennedy but to an unknown Soviet submariner named Vasili Arkhipov who refused to ignite World War III despite the gravest provocation.

A Soviet Foxtrot class diesel submarine, B-29, is steaming toward Mariel Bay, Cuba. In a game of high stakes cat and mouse, B-29 is part of a fleet of four submarines – spearheads of a mission to establish a Soviet naval base in Cuba – that had set sail from the Arctic port of Murmansk.

Unknown to these submariners, American helicopters, aircraft and battleships, including an aircraft carrier, are scouring the ocean, looking for Soviet vessels. US Navy Admiral George Anderson – flouting orders from the Kennedy White House – issues instructions to his Caribbean flotilla to fire at the Soviet subs if they approach Cuba.

The reckless Anderson, however, hasn’t reckoned with the cargo on board the four submarines his ships are hunting. Only a handful of the Soviet sailors on board the submarines know their vessels carry a nuclear torpedo – each equal to the bombs that wiped out Hiroshima. Vasili Arkhipov, the second-in-command on board B-59, is one of the officers privy to this knowledge.

Vasili Arkhipov, the second-in-command on board B-59. Source: Press Photo

The gravity of the situation can be measured from the fact that the submarine crews –do not require Moscow’s permission to unleash Armageddon if they think they are under attack.

As Soviet and American leaders mull nuclear war that could obliterate much of the earth, when paranoia on both sides means the slightest provocation could trigger nuclear war, things get worse.

The US Navy ships locate B-59 near Cuba and start dropping practice depth charges, explosives intended to force the submarine to come to the surface for identification. A few days earlier, messages conveying the US Navy’s “Submarine Surfacing and Identification Procedures” were transmitted to Moscow. However, the submarines are out of radio contact and the instructions cannot be passed on to them.

Now practice depth charges are not really bombs but small grenades designed to signal submarines to surface. The problem, however, is even minor explosions under water are magnified, sending shock waves through the submarine’s metallic hull.

Out of contact from Moscow for days, the crew of B-29, under the command of Captain Valentin Savitsky, fears war has started. As Vadim Orlov, the submarine's radio intelligence officer, narrates to Russian journalist Alexander Mozgovoi in the book Cuban Samba of the Foxtrot Quartet, “The Americans encircled us and began dropping grenades that were exploding right next to us. It felt like sitting in a metal barrel with someone hitting it with a sledgehammer. The crew was in shock.”

The bombardment goes on for several hours and some sailors lose consciousness as oxygen runs low and temperatures inside the submarine soar above 122 degrees F. Hot and sweaty inside their claustrophobia inducing vessel, with drinking water rationed to just one glass per sailor a day, the crew is “under terrible pressure at the moment, both psychologically and physically'' according to Mozgovoi.

It was eyeball to eyeball but who really blinked?

After an especially strong explosion shakes the submarine, Savitsky becomes furious and orders his weapons officer to arm the nuclear-tipped torpedo. “There may be a war raging up there and we are trapped here turning somersaults,” Savitsky says. “We are going to hit them hard. We shall die ourselves, sink them all but not stain the navy's honour.”

But procedure requires Arkhipov and the political officer Ivan Maslennikov sign off too. A heated argument follows as Arkhipov vetoes the launch. His contention is total war cannot be unleashed without complete information. (It would have been madness to allow the launch, he later told his wife Olga.) As Noam Chomsky writes in Hegemony or Survival, if the torpedo had launched, a devastating response would have been a near certainty, leading to total war.

Arkhipov eventually persuades his colleagues to surface the submarine and wait for further orders from Moscow.

The US Navy vessels surrounding B-59, unaware they are cornering a submarine armed with a nuclear torpedo, now come closer. By this time, however, the hotheads on the American side have been asked to stand down, with the White House asking Admiral Anderson to not move a finger without its permission. (Anderson is dismissed after the crisis.) To indicate their intentions are not hostile, the US Navy plays a jazz band on the deck of one of the ships.

The Americans think there is some sort of malfunction in B-29 but Savitsky declines offers of assistance and eventually turns around, heading for home base. B-29 is tailed by US Navy ships until it submerges on October 29. The three other Foxtrots also receive orders to abort their mission. The Cuban Missile Crisis is officially over.

According to Orlov, the major danger during the crisis was not from the unauthorised use of a nuclear weapon but from an accident caused by the interaction of men and machines under the most trying of circumstances.

The National Security Archive says, “Soviet submarine commanders were highly disciplined and unlikely to use nuclear weapons by design, but the unstable conditions on board raised the spectre of an accident.”

Captain Joseph Bouchard, the author of a major study on naval operations during the missile crisis, supports this point when he suggests that the “biggest danger” was not from “deliberate acts” but from accidents, such as an accidental torpedo launch. If the Soviets had used nuclear torpedoes, by accident or otherwise, the US would have made a “nuclear counter-response.”

While the Americans surfaced the Murmansk quartet, some Soviet submarines may have escaped US detection altogether. Says the National Security Archive, “While the four Soviet Foxtrot submarines did not have combat orders, the Soviet Navy sent two submarines, B-75 and B-88, to the Caribbean and the Pacific respectively, with specific combat orders.”

B-75, a Zulu class diesel submarine, commanded by Captain Nikolai Natnenkov, carried two nuclear torpedoes. “It left Russian waters at the end of September with instructions to defend Soviet transport ships en route to Cuba with any weapons if the ships came under attack.”

A day after the Arkhipov affair, another submarine, B-88, left a base in Kamchatka peninsula, with orders to sail to Pearl Harbour and attack the base if the crisis escalated into war.

Commanded by Captain Konstatin Kireev, B-88 arrived near Pearl Harbour on November 10. There is no evidence the American spotted any of these ships.

Under these circumstances which the American leadership and military were clueless about, nuclear war was a near certainty and it was purely Arkhipov’s courage – literally under fire – that saved the world.

Despite being at the epicentre of the crisis, Arkhipov's role remained under wraps for a full 40 years. In 2002 in a conference held in Havana, Cuba, organiser professor Thomas Blanton of the Washington-based National Security Archive said, “A guy called Vasili Arkhipov saved the world.”

The Russian sailor remained in the navy, rising to command first submarines and then submarine squadrons. He was promoted to rear admiral in 1975, when he became head of the Kirov Naval Academy, and rose to vice admiral in 1981. He died in 1998, at the age of 72.

Robert McNamara, the US Secretary of State during the crisis, says one of the crew members told him at the conference that when Arkhipov and the other submariners returned home, they were reprimanded because they had not launched their nuclear weapons. If true, it has to be seen in the backdrop of Anderson's warmongering – there will always be those who prefer destructive war to a less than honourable peace.

So long as history remains a chronology of kings, Khrushchev and Kennedy will take the headlines, leaving heroes like Arkhipov as a footnote.