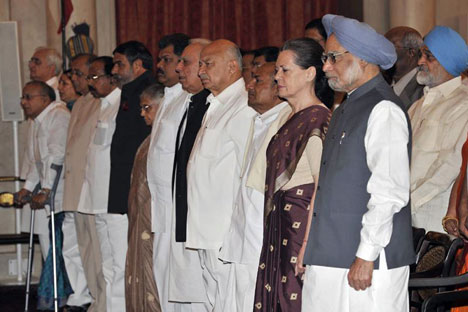 The reshuffle of the Indian council of ministers on Sunday all but appears to be a case of ‘old wine in new bottle’. Source: Press Photo

No doubt, a streak of cynicism is evident all through, signalling that Congress cares two hoots for the allegations of corruption levelled against its ministers.

When almost a third of the Indian Government is recast amidst much month-long brouhaha, there ought to be a single dominant narrative emerging out of it. And yet there isn’t. The reshuffle of the Indian council of ministers on Sunday all but appears to be a case of ‘old wine in new bottle’. Detractors of the ruling Congress Party are having a field day.

However, that won’t be a fair assessment. Obviously, the ‘troika’ that leads India today from the centre stage (and the backstage) – Congress President Sonia Gandhi, Prime Minister Manmohan Singh and Congress General Secretary Rahul Gandhi – choreographed the reshuffle while keeping their fingers in many pies.

Consider the following. This is, perhaps, the most tainted government in the entire history of independent India. No doubt, it is in dire need of shifting the locus of politics as far away as possible from the corruption scandals, which are multiplying by the day. India is heading for general elections that may possibly be held earlier than the appointed hour in 2014. The ruling party needs to come up with a convincing argument – that is, if it isn’t too late already – why it deserves a renewed mandate from the people to form the next government. The electoral prospects of Congress look dismal as of now.

Clearly, there is need to give the jaded coalition government a new look, invigorating it with the induction of fresh faces. Again, the morale of the ruling party has taken some battering and the government is surviving mainly since the opposition is disinterested in bringing it down and the mood is against a mid-term poll. Like rats leaving a sinking ship, though, however, Congress’ coalition partners are slinking away from it, keenly sensing the imperative to differentiate themselves.  Equally, in cabinet formation in India, there is always the need to give ‘regional balancing’, but this time another convoluted logic is prevailing.

To take this last point first, Kerala, one of the small states in India, which sends a mere clutch of twenty MPs to the 540-member parliament, will now be represented by an unprecedented number of eight ministers in the Indian cabinet. Similarly, Andhra Pradesh, which sends 42 MPs will now have 11 ministers in the cabinet, while in comparison, Bihar, which sends 54 MPs, has none.

Without doubt, Congress Party is pampering Kerala and Andhra Pradesh and is plainly ignoring Bihar. What explains this bizarre ‘regional balancing’?

The Congress leadership estimates that there is a good prospect of garnering the overwhelming majority of the seats in Kerala in the prevailing political climate in the state. And 20 MPs constitute a big number in the present coalition era of Indian politics.

Again, without retaining its commanding position in Andhra Pradesh, which accounts for the hard core of the Congress’s tally of MPs, the party would have no hope on earth to make a bid to form the next government. As for Bihar, on the contrary, Congress has atrophied to a point over the years that it may not win a single seat from the state; so, why bother?

In sum, a leitmotif of Sunday’s cabinet reshuffle would be that Congress is preparing for the general election, nurturing its pocket boroughs and ignoring the ‘badlands’ where it has no habitation and name. The reshuffle can be interpreted neither in ideological terms, nor in terms of the efficiency of the ministers. A key ministry such as Railways has actually been handed over to a politician with a lacklustre record.

On the other hand, the fact that six incumbent ministers were asked to quit implied that the exercise aimed at giving the cabinet a ‘new look’. Again, Human Resources Development ministry has been significantly strengthened; several economic ministries have new ministers. On the contrary, the minister of petroleum and natural gas stands ‘punished’ for no crime other than one of cold-shouldering corporate lobbying by powerful people. No doubt, a streak of cynicism is evident all through, signalling that Congress cares two hoots for the allegations of corruption levelled against its ministers in the recent period by the civil society activists.

One such minister, Salman Khurshid, has been rewarded with promotion and made India’s External Affairs Minister. But Khurshid’s elevation will draw a lot of attention for other positive reasons, too. It is pertinent to recall that within the Congress Party, Khurshid was one of the most vocal critics of the 2008 India-United States nuclear deal. He held charge as a junior minister in the foreign ministry during the period 1993-1996 and brings to bear on his new job a wealth of experience in the world of diplomacy. He has an erudite mind and is a first-rate intellectual.

Khurshid’s focus is likely to be on the neighbouring region rather than fritter away scarce energy in vainglorious projects of fastening the global commons. He can be expected to put primacy on economic diplomacy, in consonance with Manmohan Singh’s pragmatic approach of visualizing foreign policy as an extension of the national policies of development. Indeed, Khurshid is a familiar face to the Middle Eastern capitals and he is sure to respond to the Arab Spring with new thinking. He can crisscross with ease the Persian Gulf divides and is well regarded in Riyadh and Tehran alike.

But having said that, Congress leadership would also have estimated that Khurshid’s elevation to a high profile portfolio on the government would go down well with the Muslim electorate in some of the key north Indian states. It is after a long time that a Muslim minister figures in the 4-member ‘core group’ of the Indian cabinet which deliberates on key issues of security policies.

Therefore, at the end of the day, the big question will be: Will this cabinet reshuffle help the Congress’ rejuvenation? All that can be said is that the Congress leadership realizes the need to get its act together for the coming election. But its act of sidestepping the central issue of corruption detracts from the raison d’être of this reshuffle. Congress is taking a gamble that the controversial issue of corruption can be marginalized in the political discourse.

Thus, there is no ‘shock and awe’ in the cabinet reshuffle when one was badly needed. Rahul Gandhi continues to avoid joining the government. The more things seem to change, the more they remain the same. What, then, is the Congress leadership’s game plan?

Principally, the effort is to dust up the government’s image in the critical months ahead through a combination of neo-liberal reforms that appeal to the middle class and corporate interests, while touting populist measures aimed at conveying the impression that the Congress is a party of the downtrodden masses. Congress is good at this game of pandering to different constituencies.

Most important, the party is betting on the infirmities of the opposition, too. To be sure, the Congress’ main opponent, Bharatiya Janata Party [BJP], is also tarnished by allegations of corruption and has lost the moral high ground. Besides, BJP is also caught up in an existential crisis with the vaulting ambitions of its leaders colliding ever so frequently and creating disunity and confusion within its ranks and possibly even precipitating splits in the coming period.

Again, the Left parties have been showing signs of fatigue and seem to be losing steam in their traditional strongholds. At any rate, their capacity to put together a so-called ‘Third Front’ – non-Congress, non-BJP – is in serious doubt. Thus, Congress anticipates that the regional parties that today comprise its allies or are supporters of the government would really have no option but to accept its lead role in the post-election scenario. Of course, Congress has proven skill in coalition making as the recent presidential election showed – it could string the Left as well as the right reactionary elements.

Sunday’s reshuffle may seem tepid, but, paradoxically, it also underscores the Congress’s estimation that there is no party or group of parties on the fragmented Indian political spectrum today, which could seriously challenge its sole prerogative to form India’s next coalition government.