Intrigue in the ‘Russian coup d’états’ 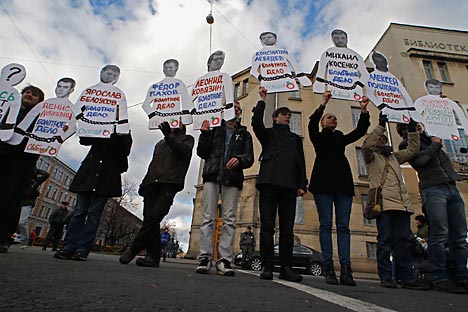 Opposition activists took to the streets in central Moscow to expess their support for those detained during the May 6 rally on Bolotnaya Square. Source: Reuters / Vostock Photo

The Kremlin seems to be bent on erasing the radical strands of the opposition from political life by punishing the nearly two dozen defendants in an exemplary fashion.

Kidnapping, torture, forced confessions – the story of Russian left-wing activist Leonid Razvozzhayev is big news in Russia where authorities are preparing a major trial of opposition supporters. Razvozzhayev, who used to work as a parliamentary assistant of a famous left-wing member of parliament, Ilya Ponomarev, had a premonition that his activities will not go unnoticed by the authorities. When Russian police arrested some of his comrades on charges of incitement to riot, Razvozzhayev left for Ukraine. He went to the UN High Commissioner for Refugees office in Kiev and started filling out papers to request political asylum. He went out to buy some food and was never seen again.

Masked men surrounded him and pushed him into a waiting car. According to the activist, he was then transported to Russia and tortured in a cellar for two days. He confessed to plotting to overthrow the government with violent means and implicating others, including one of Russia’s leading left-wingers Sergei Udaltsov, leader of the Left Front movement. This entails stiff sentences in a Russian court. However, when he was in Moscow, Razvozzhayev disavowed his confession saying it was forced out of him under torture.

The authorities who evidently counted on the activist’s cooperation are in a mild state of shock. The case that was meant to prove that the Russian opposition is funded from abroad (primarily, Georgia and the US) has quickly turned into a national embarrassment that may well soon turn into an international one. The Kremlin seems to be bent on erasing the radical strands of the opposition from political life by punishing the nearly two dozen defendants in an exemplary fashion. However it seems that the result may be different from the intended.

First, international attention has been focused on Russia’s relatively weak opposition as never before. It is quickly acquiring legitimacy beyond its own wildest expectations. Second, the authorities were unable to present clear evidence of the opposition plotting to cease power, apart from a hastily assembled documentary on Gazprom-controlled NTV channel. It purported to show, among other things, Udaltsov meeting Georgian emissaries who allegedly promised him arms and money to organize uprisings in Russian cities. Even after all the arrests, the prosecution suddenly announced that the court hearing which most people expected to happen in November or December is to be rescheduled for March. This seems to indicate that there is not much proof in the Kremlin’s allegations of subversive activities.

Third, the Russian police and prosecution hope that this prolonged campaign of arrests will scare off the opposition and stifle the protests. Several polls recently conducted in Russia indeed show evidence that fewer people are ready to take part in opposition rallies. However, the same polls also indicate that discontent with government policies in Russia is continuing to grow. It is increasingly streamlined, according to the three main ideological strands: Westernizing liberals, nationalists and left-wingers. The public opinion also wants to focus on causes and people that can achieve practical results. There are not too many around now. But the demand is definitely there. While the Kremlin is striving not to let these people appear on the scene, the opposition will have to brave government structures and organise itself to start looking like a real alternative. It is a race against time and history that is under way.