The culinary delights of the Soviet Union 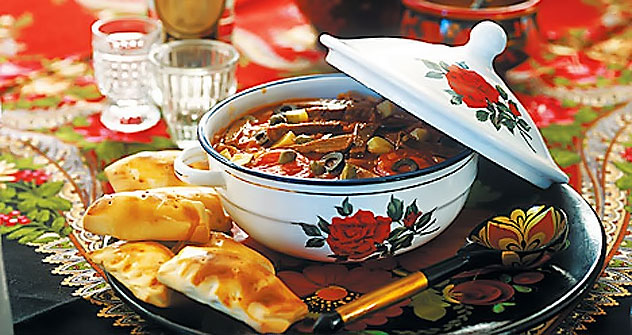 A new generation of Russians – born on the cusp of the USSR's demise, or shortly after it – is very happy to enjoy these Soviet culinary traditions. Source: Stockfood/Fotodom

Soviet-era food products and cuisine are gaining popularity across Russia and many consumers of these products were born after 1991.

Nostalgia for the Soviet days has become very popular of late. Everyone misses them, even those who never really experienced them. On the other hand, the Soviet era never really went away. Its symbolism, traditions, social politics, education system and healthcare network, and its cultural legacy have established today's norms of modern Russia, whether people like it or not.

Soviet cuisine and food products make for a big part of this nostalgia. Passing enthusiasm for 1990s imported foodstuffs in glitzy packaging have given way to the tastes of childhood memories and comfort foods. Many goodies from the Soviet era give foreign competitors a run for their money in modern supermarkets and corner shops: Alenka milk chocolate bars; 48-kopek half-kilo vanilla ice-cream bricks, Stolichnaya wheat-grain vodka, Moskovskaya Vodka, Vologda dairy butter, Doctorskaya boiled sausage, and many more.

Experts calculate that there are around 3,000 former Soviet-era brands doing well in the market today and their number is set to grow. Obviously they're been repackaged in several cases, while in others the old Soviet-look packaging is all part of the appeal. One example is the famous Soviet pelmeni (dumplings consisting of a filling wrapped in thin, unleavened dough) in their dreary cardboard box, or sweetened condensed milk in blue-striped 250g cans.

This nostalgia clearly represents a yearning for a lost past and Soviet-era food products are becoming a benchmark for forgotten quality and natural flavours, especially in medium-sized and smaller towns. Consumers fondly remember the Soviet quality mark that appeared on food packaging and grumble that no equivalent of the GOST (mandatory and nationwide quality standards that applied throughout the USSR) system now exists. Meanwhile a variety of commercial outfits that have succeeded Soviet-era producers are tussling for the right to represent particular Soviet brands to consumers.

Soviet nostalgia has reached the grocery basket and home cooking of average citizens. Of course, the sky's the limit when it comes to preparing meals at home, thanks to the effects of globalisation. Yet new dishes still remain a fantasy, a whim, while traditional soviet and Russian cuisine still makes-up the mainstay of Russian eating habits.

Syrniki: Life is more than just a paneer!

People in Russia prefer sourdough rye bread, especially the much-loved Soviet brand Borodinsky: steam-cooked rye bread enlivened with molasses and whole cardamom seeds. They also enjoy a huge variety of dairy-based products: curd cheese (paneer), sour cream, ryazhenka (a sour milk product made from fermented heated milk), and kefir (a fermented milk drink made with kefir grains). Frankfurters and salami-style sausage are still produced for the domestic market at the Soviet-era plants of A. Mikoyan and Ostankino. Porridges are made from buckwheat, from oats, and millet; while wheat grain porridge can be made either with milk or with butter. Open sandwiches are enjoyed with cheese or slices of sausage. Eggs can be boiled or fried, or served as omelettes. A mid-day three course lunch is preferred: a hearty soup, such as cabbage-soup or borsch; meat or fish served with a potato or grain side-dish; and tea or fruit compote, such is the legacy of Soviet eating habits.

Today many families often make Soviet-era recipes, such as the sometime favourite Macaroni po flotski: large chunky macaroni, dressed with fried or boiled minced meat and fried onions. Soviet rissoles are often seen on menus. They are quite similar to European croquettes, but leaning towards the style of an American hamburger. Stalin-era Commissar Anastas Mikoyan – the father and ideologue of Soviet mass catering – was so impressed by hamburgers during his visit to the USA that he decided to produce something along the same lines on his return home, a Soviet kind of rissole for public catering, which eventually became part of the Russian home cuisine. Another example was his Soviet Goulash: stewed meat in a tomato sauce, served with boiled buckwheat. An unmissable Soviet-era hors d'oeuvres was dressed herring: chunks of herring fillet mixed in layers with cooked beetroot, potato and carrot, and liberally doused with mayonnaise. Gobies in tomato sauce are still popular – gobies being a small fish from the Black Sea; along with Sprats, traditionally smoked and canned in oil.

Russian pancakes are served with many fillings: meat, cottage cheese, and yeast-raised pancakes were always popular with Soviet families. Pelmeni are now produced in nearly all of Russia's medium-sized and major cities. Experts believe that pelmeni, the favoured food of lonely bachelors, accounts for 80 percent of frozen convenience foods in Russia.  Home bottling of salted or pickled vegetables was always the pride of Soviet housewives and remains so – although often now they are bought in shops or at the market, rather than made at home.

It goes without say that the further one goes from the capital or major cities, the closer home cooking clings to the old Soviet traditions. Yet even in well-to-do households in major cities Soviet cuisine – perhaps embellished with a few imported ingredients – still makes up a happily nostalgic laden table for lunch. The fact that back in the Soviet era – especially in its declining years – shortages of food items were a topic of continuous annoyance has now transmuted into a touching memory, even a source of pride. Before our very eyes new myths come into being about the recent past, about the health benefits and natural taste of Soviet-era foodstuffs, how simple they were, and how easy to get.

A new generation of Russians – born on the cusp of the USSR's demise, or shortly after it – is very happy to enjoy these Soviet culinary traditions. You can often hear parents vying with each other about how their children love this or that Soviet dish, which is all prepared at home for them. The attitude younger Russians have to Soviet-era dishes often comes down to a simple formula: “Why didn't we have this before now? It's delicious stuff, much nicer than those western dishes and recipes.”