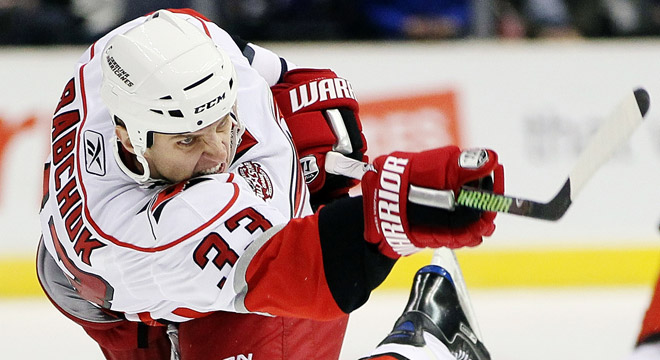 Road to the NHL: From Kiev to Calgary

Babchuk began playing hockey in Kiev as a boy at the Sokol School. At 14, he moved to Elektrostal along with fellow future NHL player Nikolai Zherdev.

“In the late 1990s, hockey in Ukraine fell into decay and the only chance was to move,” Babchuk said. Somewhat later, Babchuk found himself in the Russian Major Hockey League.

“I first played for Kristall and Elemash, and then Ak Bars invited me. Before leaving for North America, I played for SKA St. Petersburg. I played a total of only 30 games in the Superleague. No wonder no one remembers me.”

Finally, Babchuk left for the U.S. For a half-season, he played for the AHL, and then in January 2004 he made his NHL debut, playing for Chicago against Calgary (3:1). Babchuk’s prospects at the time were brilliant.

They called him a second Chris Pronger because of his size, his talent and how hard he hit the puck.

He demonstrated this force at an AHL All-Star Game, when he sent the puck hurtling across the ice at close to 100 miles an hour, the best result at that show.

Babchuk is known for his high-speed shots and for his prospects, although it is true that Babchuk has not become another Pronger – mainly because he didn’t become part of the main Chicago team, and so had no incentive to develop. “I didn’t like it there,” Babchuk said. “The atmosphere was unhealthy. A lot of young guys, all fighting tooth and nail for a place on the team.”

In the 2005/06 season, Babchuk was traded to the Carolina Hurricanes. Anton felt the difference immediately: “There the tone was set by the older players. Everyone was calmer, more confident. The older players tried to make the new guy feel included right away and part of the team.”

That same year the Hurricanes went on a fantastically successful crusade for the Stanley Cup. Babchuk did not play a single match in the playoffs, but he was part of the triumph. His name was engraved on the silver cup, and he took it home to Kiev for a day, to his old skating rink, Sokol.

Babchuk has twice returned to Russia to sign year-long contracts with Avangard Omsk. The second time (the 2009/10 season) Babchuk witnessed the firing of Avangard coach Raimo Summanen a day before a critical match in the playoffs. Babchuk made his views clear in a newspaper interview: he said he’d never seen such chaos. His phrase made headlines, and Avangard general manager Anatoly Bardin vowed that Babchuk would never play for his team again. (In the end, it was Bardin who left.)

Babchuk’s best season so far was 2008/09, when he racked up 35 (16+19) points in 72 matches. It was Babchuk who scored the decisive goal in overtime against Pittsburgh that sent Carolina to the playoffs. Today the grenadier is playing for the Calgary Flames, although head coach Brent Sutter, does not have complete faith in him.

“When they were handing out the championship rings, Carolina’s general manager said that I was part of the team and they would put me on the roster. Later I checked —yes, I was on the roster.”

“I don’t go racing after players just to knock them down on the ice. If there’s a good moment, I’ll do a power play. But my main trump is my speed shot.”

“One time someone cut the laces on my skates. There was also this group of players that liked to joke around. They liked to squirt ketchup on each other’s shoes during lunch.”

But overall, Babchuk’s trumps are in order: his powerhouse shots and huge size. All he needs now is someone to believe in him. Interestingly, Babchuk has never been invited to join the Russian national team as an adult.

They say that Babchuk’s nickname (Babs) is not an abbreviation of his last name, but in honor of Barbra Streisand. That’s the Americans’ idea of a joke.

Babchuk is crazy about old Soviet movies, comedies like The Twelve Chairs. He says he has no hobbies: “After training and games I like to just lie on the couch, have a nap. Or go out to a restaurant.”

Italy is his favorite holiday destination. The player has spent most recent vacations in sunny Apulia. Babchuk also likes visiting his native Kiev occasionally to see his parents. He has not bought a home in Calgary yet. “I don’t have property there. I rent a house during the season and, in the summer, I rent a garage, where all my stuff is packed in my car.”