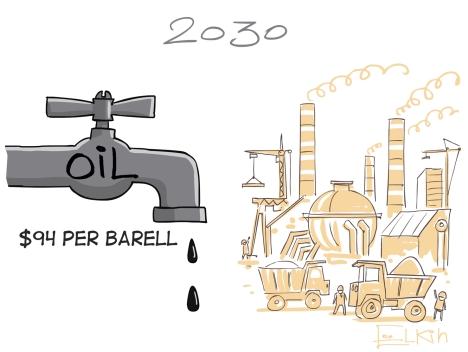 At the recent meeting of the Valdai International Discussion Club of Russian and foreign experts in St Petersburg, several European professors predicted that in 18 years there would be a world government ensuring universal prosperity while concentrating on economic issues, for example, Russian oil prices.

Most economists at the forum did not see a world government as part of Russia’s future. Their forecasts were based on several scenarios, the two key indicators being oil prices and pace of reform. The final report leaves aside the “alarmist scenario”, such as world war or a climate disaster, when oil prices would drop below $80 a barrel. The experts proceeded from the most realistic figures: $94 a barrel in the worst case and $140 in the best.

Four rough scenarios of Russia’s development until 2030 were proposed. The “sanguine” scenario envisaged sweeping reforms and high oil prices. In this case, Russia’s growth rate would outstrip the world average and by 2030 living standards would reach those of present-day Switzerland.

The worst-case, “melancholic” scenario would see the Russian authorities shelve reform because of low energy prices. In that case, Russia’s economic growth rate would be slightly less than the rest of the world, while its share of the world GDP would remain at its present level (2.6 percent). Incomes would be about the same as in the Czech Republic.

Between these two extremes are scenarios called the “phlegmatic” and the “choleric”. Under the former, the authorities push ahead with reform with low oil prices ($94 per barrel). The “choleric” scenario predicts high oil prices ($140 per barrel) but reforms are implemented locally or not at all. Living standards in 2030 would be about the same as in today’s France.

Economists favour the “phlegmatic” scenario because it would see greater economic growth than the “choleric” scenario. “It’s pointless talking about economic policy until we decide what we will build and determine the national development strategy to be implemented,” says Sergei Karaganov, member of the Valdai advisory board and dean of the world economy and world politics faculty at the Higher School of Economics.

There is demand for reform in Russian society. Sixty-eight percent of Russians with above-average incomes would like their children to study and work abroad, and 37pc would like them to live abroad permanently. There is hidden discontent among the educated middle class and those on low incomes, albeit for different reasons.

To prevent the stagnation of complex production sectors and the “dumbing down” of social life – which would trigger an exodus of talented youth – the authorities need to offer society new positive goals and prove their readiness to work towards them in the next few years. In the discussion, many experts criticised the weakness and sometimes absence of effective institutions, as well as low spending on innovation and lack of incentives for businesses to invest in their own country.

Institutional reforms – judiciary, tax and political – advocated by Valdai forum participants are just one driver of the Russian economy. There are others. Presidential adviser Sergei Glazyev cited figures showing the potential of the Eurasian Economic Union of Russia, Belarus and Kazakhstan to be a growth driver.

Glazyev believes the joint co-operation programmes in the organisation could increase GDP by 10-15 percent over the next 10 years for everyone involved. This would increase Russia’s economic growth rate to 7-8 percent per year. It would also make the country attractive for domestic investors that now prefer to keep their money offshore. Glazyev thinks it strange that Russia is “the only state that does not have agreements on sharing tax information with offshore zones”.

Another growth driver that could partly make up for the sluggish pace of reform is the use of Russia’s competitive advantages. This is, above all, the investment opportunities in Siberia and the Far East where investments in some projects oriented towards the Asian market could generate an economic boom.

Russia will still be choosing between Europe and Asia. Europe dictates its rules to energy exporters, but appears to be a predictable partner. Meanwhile Asia, which has few common rules and many national idiosyncrasies, is still creating an infrastructure for Russian business.

These extra drivers would help Russia achieve the targets of the “phlegmatic” scenario by 2030, even if reforms in the country are not as deep and comprehensive as Valdai club experts propose.