The Voice of Russia
Mikhail Aristov 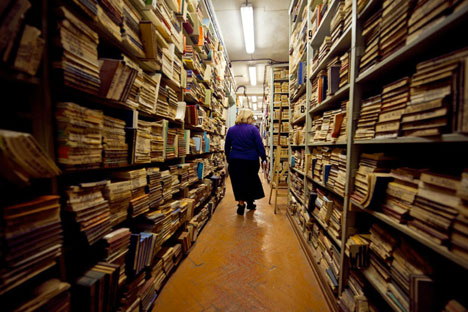 The archives contain several documents that could throw new light on the atrocities committed by Hitler’s troops during the war.

The State Archives of the Russian Federation is treasure trove for those who want to information about the Second World War. They contain numerous documents, photos and documentary films that later became part of the proof presented at the Nuremberg Trials. The information, collected during the Second World War, has lost neither its scientific nor public significance.

27 million Soviet citizens were killed during the war, where 1710 cities and nearly 70,000 settlements and villages were razed to the ground in the country as a result of the invasion by Nazi Germany. The damage included destroyed industrial enterprises, kolkhozes (collective farms), and also thousands of oil fields and dozens of electric power stations. The country lost one-third of its national property. The damage done to the now defunct Soviet Union during the Second World War exceeded the combined losses of all other European countries. When the Extraordinary State Commission (ESC) was set up in 1942, nobody knew about the atrocious crimes committed by the Fascists on the territory of the former USSR on such a wide scale.

"Only the Red Army troops that entered the liberated territories saw the burnt villages, gigantic pits with corpses and numerous concentration camps,” says Alexander Dyukov, Director of the Historical Memory Foundation. ”The commission did good work. Its members questioned residents of the liberated territories and collected information about the Nazi crimes, mass killings as well as about property damage. Thus, the work done by the commission was of great help in conducting trials. Besides, all these materials could be of use in the future. Today historians writing about the war use these materials while writing about the policy of extermination."

When the Red Army liberated European countries, the Extraordinary State Commission continued its work. Reports on Poland, Yugoslavia, and Czechoslovakia were also demonstrated at the Nuremberg Trials. Today in view of attempts to glorify Nazi collaborators in the Baltic countries and in Western Ukraine, the above-mentioned materials are acquiring not only scientific but also public significance, according to Dyukov.

"This, first of all, is information on concrete punitive operations and concrete crimes,” says Dyukov. “We should mention a punitive operation that was carried out by the Nazi soldiers and their collaborators in the north-western regions of Belarus and Latvia. Thanks to the ESC documents, we learned that the Latvian Police Battalions acted as a strike force during such operations. We know that the information that was made public during the Soviet-era times was different. Now we know how many villages were burned down, how many residents were killed, and how many of them were sent to concentration camps."

Nearly 60,000 documents collected by the Extraordinary State Commission are kept in the State Archives of the Russian Federation. Not all of them have been studied and processed, which means that there will be more discoveries.