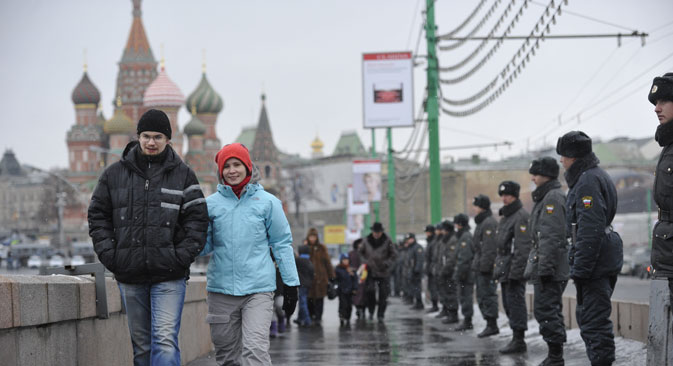 Reporting your suspicions to the police on any given pretext? We’ve already seen this in our history and on a dreadful scale, at that. We still remember the era of denunciations – it’s in our genetic memory. Source: RIA Novosti.

The head of the Russian police, citing a “Western” model, has called on Russians to be more active when it comes to informing on their neighbors in order to prevent crimes. Experts have expressed doubts about the move and suggest that the police should be more efficient in their duties, instead.

Crime prevention in Russia is stymied by the reluctance of citizens to inform law enforcement agencies about possible offenses – simply put, they do not want to “snitch” on their neighbors.

The country’s Minister of the Interior, Vladimir Kolokoltsev, spelled out this opinion in a recent interview with Moskovsky Komsomolets. According to Kolokoltsev, the task of bringing down crime levels requires not only an improvement in police practices but also a “fundamental shift in the Russian mentality.” The minister cited foreign practice to illustrate his idea.

“In Western countries, informing the law enforcement of your neighbor’s illegal or criminal activities is not considered inappropriate or disgraceful – this is actually how most crimes are solved or prevented. But Russia has a particularly dark history with regard to this matter, and it has left a lasting impression in people’s minds. We are guided by a powerful stereotype that snitching is wrongful and immoral. Even the word itself disgusts most people,” Kolokoltsev said.

The minister’s proposal has drawn a mixed response from the expert community, and even the State Duma’s Security Committee is split on the matter. State Duma deputy Alexander Khinshtein, for one, supports the move.

“Vladimir Kolokoltsev speaks primarily from his experience, since he knows very well that the availability of information largely determines whether or not a crime can be solved or prevented," Khinshtein stated in an interview on Kommersant FM. "He is certainly right in this respect."

"He is also right that informing the police is a widely practiced custom in Western countries," he added. "If you throw an empty can out of your car window somewhere on a German autobahn, you can be sure that someone will report it to police. And the people see nothing shameful in doing this.”

Fellow committee-member Boris Reznik, on the other hand, believes that such “cooperation” will do more harm than good, calling Stalin-era repressions to mind.

“Reporting your suspicions to the police on any given pretext? We’ve already seen this in our history and on a dreadful scale, at that. We still remember the era of denunciations – it’s in our genetic memory. And the very thought of doing it again is abhorrent. Just think how many envious or simply dishonest people will falsely denounce their neighbors. It’s clear that the idea will do more damage than good,” Reznik said.

Vladimir Rimskiy, head of the sociology department at the Indem Foundation, also anticipates false tip-offs and accusations. “What does informing on your neighbors actually mean? It means trying to find things they are guilty of. It will become a method of settling scores with each other,” said Rimsky.

Political analyst Dmitry Travin disagrees with the notion that the repressions of Stalinist Russia remain in Russia’s “genetic memory,” but he still does not believe in Kolokoltsev’s proposal.

“I don’t think that reporting on an imminent crime absolutely disgusts Russian people; it doesn’t disgust the Germans or the English,” Travin said. “I’m afraid the problem lies elsewhere. Even when a crime has already been committed, our law enforcement authorities are not exactly eager to tackle it. The problem is not the people, but the established practices within law enforcement – their focus on dealing with their own problems, like taking bribes.”

Even the Minister of the Interior admitted the need to improve police practices. Meanwhile, experts point to the fact that the first stage of reforms initiated by the previous Interior Minister (link to our material) did not yield any tangible results. The second stage of reform will now be held in conjunction with the expert community and civil rights activists.

This article is based on materials from Moskovsky Komsomolets, RIA Novosti and Kommersant FM.