Russia, China back Brahimi for ‘political settlement’ of the Syrian conflict 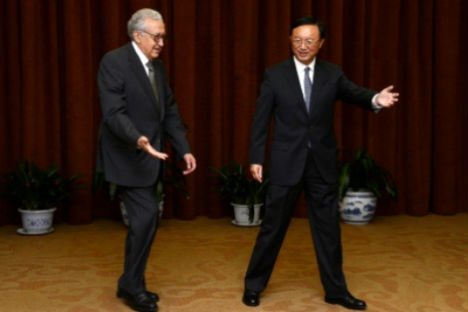 The two UN Security Council permanent members reaffirm view that negotiations are the only way to solve the crisis.

After their talks with joint UN-AL (Arab League) envoy Lakhdar Brahimi in Moscow and Beijing in late October,  Russian Foreign Minister Sergei Lavrov and Chinese Foreign Minister Yang Jiechi unequivocally backed Brahimi for his assiduous efforts to bring all sides to a negotiating table to find a political settlement of the 20-month Syrian conflict, which has already claimed tens of thousands of lives with no end of the crisis in sight, in near future. Brahimi, who replaced former UN Secretary-General and joint UN-AL envoy to Syria Kofi Annan, is due  to present new proposals to resolve the Syrian crisis to the UN Security Council later this month.

Although Lavrov and Brahimi expressed disappointment at the joint press conference on October 29, over the UN-AL envoy’s failure of a four-day truce in Syria during the Islamic Eid-al-Adha holiday, both were of the opinion that there was little sense in accusing either the government or the opposition forces.

“Our main task at this stage is to get all the Syrians who are fighting each other to stop shooting and sit down at the negotiating table,” Lavrov said, stressing that it was “essential that all outside players use their influence with various Syrian groups, be it government or opposition forces, to send the same signals.”

For his part, Brahimi said the collapse of the ceasefire would not weaken "our resolve" to bring an end to fighting."We shall continue to work as hard as we possibly can and in cooperation with everybody, inside Syria and outside of Syria, to bring the level of violence down, put an end to it, and launch Syria on the road to building the new Syria."

Lavrov said that a “veritable war” was going on in Syria and the violence was escalating with provocations quite often prompting inadequate response. “In view of this, all external forces must fully sense responsibility for the conduct of those whom they support in Syria,” he said, adding “We are ready for this, and we tackle this. We call on all our partners, including those we met in Geneva, to act like this.”

He was referring to the Syrian opposition’s allies in the West and in the Middle East to the effect that they should realise that without political dialogue with the Syrian government no solution would be found and urged them to persuade the rebels to declare an immediate ceasefire and begin political process.

However, Lavrov and Brahimi did not offer any clear hint as to what steps may be taken to stop the ongoing violence in Syria. While Lavrov said that Russia will call for returning the UN observer mission to Syria, Brahimi noted that for the moment, there were no plans to send the observer mission. “The work is being done if any emergency situations occur, because this may indeed become a possibility in the future” he said.

Russia believes that the Geneva Communique of the Action Group of Syria “still remains relevant” and continues to call on the UN Security Council to approve the document. At a meeting on Syria in Geneva on June 30, the Foreign Ministers from UN Security Council permanent member-states and from countries neighboring Syria proposed establishing a transitional Syrian government that would comprise both the Syrian authorities and opposition forces, but the continuing fighting in Syria has made it impossible to launch a political dialogue.

Russia has repeatedly urged the Syrian opposition to reaffirm its commitment to the Geneva Communique, which calls for a political transition in Syria. The communiqué has already been supported by the Syrian government.

After his talks with his French counterpart Laurent Fabius on October 31 in Paris, Lavrov said that the Geneva Communique did not envision any decision on the fate of Assad.

“If this is a priority for somebody, bloodshed will continue, and for quite a while, too,” he said, adding “Assad’s fate should be decided by the Syrian people.”

“It is very important to prevent the infringement upon ethnic minorities’ rights in Syria and the destruction of the ethno-confessional balance. This balance was created due to France’s contribution,” he pointed out.

“Initially our partners put forth a provision under which the incumbent Syrian leadership should disappear from the face of the earth. But this phrase was not included in the final variant of the Geneva Communique. Thus, we can draw a conclusion that nobody agreed on this issue. It is wrong to interpret the document so that it envisions the interference into the Syrian President’s fate. The fate of Assad should be solved by the Syrian people,” he said, referring to the Communique.

“The fact that Syrians themselves should decide on their fate is the resolution of the UN Security Council. This is part of the Geneva consensus. The document calls for ceasing violence by the government and the opposition and start talks by appointing negotiators initially and agree on the parameters and terms of the transition period,” he said.

“We recommended Syria to form a governing body, which will deal with preparing free and fair elections. It is counterproductive to philosophize on overthrowing the ruler etc. This is like building castles in the air,” Lavrov pointed out.

“There are no ways that are recorded in the Geneva Communique. If anyone has the priority to overthrow the ruler, it has been a long time the bloodshed continuing,” he added.

During his talks with Brahimi on October 31 in Beijing, Chinese Foreign Minister Yang Jiechi presented a new 4-point plan for a political resolution to the Syrian crisis, calling on all parties in Syria to cease fire and violence and start political transition as soon as possible. The plan includes:

One, all the parties in Syria should strive to stop fighting and violence, and cooperate with the mediation efforts of Brahimi. They should strive toward a ceasefire region by region or phase by phase.

Two, all the parties in Syria should appoint empowered representatives. With the help of Brahimi and the international community, they can formulate a roadmap of political transition through consultation; establish a transitional broadly representative governing body.

Four, all the parties should take concrete steps to ease the humanitarian crisis in Syria. The international community should increase humanitarian assistance to the Syrian people and ensure proper resettlement of refugees beyond the Syrian border.

“The situation in Syria is at a crucial stage, and is important to the fundamental interests of the Syrian people as well as peace and stability in the Middle East,” Yang said, adding, "A political settlement is the only viable solution in Syria."

Brahimi thanked China for its firm support to his mediation efforts in finding a political solution to the Syrian conflict. He also expressed appreciation for Chinese efforts toward a political resolution in Syria, as well as his hope that China will continue to play a positive and constructive role to resolve the crisis.

According to the Chinese Foreign Ministry spokesman Hong Lei, China's new plan on resolution to the Syrian conflict aims at building consensus of the international community and supporting the mediation efforts of Brahimi so as to protect and promote the momentum and process of the political settlement of the issue.

Russia and China have been advocating peaceful political solutions to the Syrian issue and oppose any Western-backed military intervention in the country. They have vetoed three UN resolutions condemning Assad's government for the violence. The Western countries have strongly condemned Moscow and Beijing for their repeated refusal to support UN Security Council resolutions against the Assad regime.

In the wake of tragic car-bomb explosion in Damascus on October 26, causing the collapse of the four-day truce, Russian Foreign Ministry accused the West of “pursuing an open policy of double standards” in Syria. Britain blocked the UN Security Council statement, proposed by Russia, to condemn the car-bomb explosion as terrorist acts in Syria. Britain vetoed the Russian draft resolution, saying it was irrelevant to adopt a statement on an isolated issue.