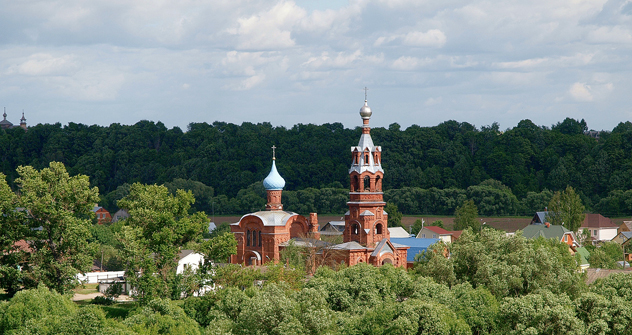 The small town in the Kaluga Region could just as well have been a setting for a 19th century Russian novel.

All it takes to get a feel of small town life in 19th century Russia is a 2-hour drive from the capital to the tranquility of Borovsk in the Kaluga Region. This laidback and peaceful town with a population of just over 12,000 can trace its history all the way back to the 13th century but has the distinct feel of a place that could well have been a setting for a Fyodor Dostoyevsky novel.

Borovsk’s contemporary claim to fame has been a collection of painted facades by Vladimir Ovchinnikov, a local artist, but it’s hard to not notice the historical relics that date back centuries. Onion domes of colourful churches rise above wide-open fields, metaphorically symbolising Russian Orthodox Christianity, which has woken up like a sleeping giant after decades of suppression.

As we looked at an antiquated wooden church on a warm day, our guide explained to us that the great Dostoyevsky’s roots can be traced to Borovsk. This is where the writer’s grandparents lived a life in which religion and spirituality played a central role. The Orthodox Religion, with its large collection of saints, is misunderstood both in Russia and other parts of the Christian world. There’s a fine element of mysticism and spirituality that was captured in some of the great works of Russian literature of the 19th century. One of Dostoyevsky’s favourite subjects was the simple peasants, who lived in rural Russia. He admired them for their inner beauty that always found a way to shine through.

The most imposing religious complex in Borovsk is the St Paphnutius (Paphnutiev) Monastery, which was constructed in the middle of the 15th century at the confluence of the Istrema and Protva Rivers.  As we entered the beautiful monastery, the toll of church bells drowned out the noise of traffic from the nearby highway.

Lesser known than the famous monasteries of Valaam Island and Sergeyev Posad, the St Paphnutius is a serene complex, which has managed to maintain its religious sanctity. “Non fumare (don’t smoke),” shouted a local priest to a group of shocked visitors from Rome, who were walking outside the main cathedral. The monastery is very strict when it comes to observing certain rules and language doesn’t seem to be a barrier.  Women are required to cover their heads in the complex and to dress modestly in the warmer months.

St Paphnutius, the son of a baptized Tatar, was a diligent monk known for his love and compassion. The saint spent 63 years of his life as a monk and founded the monastery in Borovsk in 1444. The original stone cathedral had icons painted by Dionisy, one of Russia’s greatest icon artists. The saint lived a very austere life, where he continued to do hard manual labour well into his old age and did not eat on Mondays and Fridays. Monks at the monastery could feel the saint’s presence years after his death.

There is an indisputable spiritual energy in the main cathedral, something that is missing in many other churches in Russia that have basically become nothing more than tourist attractions where the sounds of chattering visitors and camera flashes  can be extremely annoying to say the least. Despite the sanctity of the main cathedral, there is a heaviness that comes from the burdens of the past. In the 17th century, Feodosia Morozova, probably the most famous partisan of the ‘Old Believer’ movement was incarcerated with her sister in the underground cellar of the monastery and died of starvation.  She is now venerated as a martyr by the Old Believers, who came out of their shell after the fall of communism.  If those walls could talk, we’d many interesting stories and unfortunately a big number of them would involve cruelty but such is Russian History.

Close to the monastery are smaller churches, many of which have a tale to tell. Napoleon crossed these areas on his way to Moscow two hundred years ago, but what is closer to recent memory are the tombstones of those who died to save the world from Nazi Germany.

The most charming part of Borovsk remains the market and the central areas. The town grew around the rivers and the advent of the Soviet Union passed it by. The image that strikes me the most from my visit to Borovsk is that of an 8-year old boy sitting on his bicycle and observing the vast fields of his kingdom. The simplicity of his life may be too difficult to comprehend for those living 94 kilometres away in Moscow.