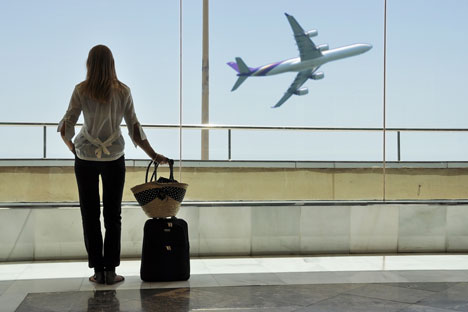 Low-cost carriers are fighting for Russian airspace, and consumers stand to reap the benefits from increased competition.

Travellers who’ve flown from Moscow to anywhere know that – typically – the trip doesn’t come cheap. Demand for less expensive tickets, however, may soon force some changes on the Russian market.

EasyJet, a British low-cost carrier, announced in late October that it will start providing direct flights between London’s Gatwick and Moscow’s Domodedovo airports. Beginning spring 2013, the airline will operate 14 return flights per week between the capitals, and will start prices at £125 (6,300 roubles) for a round-trip.

EasyJet’s expansion follows its triumph in a competition with Virgin Airlines, held by the British Civil Aviation Authority, for operational rights in Russia. A bilateral agreement limits access between the countries to just two British and two Russian carriers. Previously, the UK slots were occupied by British Airways and British Midland International (BMI), but a spot opened up after British Airways’ parent company, IAG, took over BMI in April this year.

“We expect to fly over 230,000 passengers in the first year of operations. When EasyJet enters a new market we open it up – bringing in competition and lower fares and enabling more people to travel on the route,” Celine Prenez, spokesperson for easyJet, told the Moscow News.

Aeroflot and Transaero hold operational rights on the Russian side.

Though EasyJet’s expansion marks a victory for low-cost carriers in Russia, the country remains an inhospitable market toward growth by foreign and budget airlines. The Russian Air Code forbids foreign carriers from operating domestically, and there has been zero low-cost domestic air traffic since Russia’s Avianova and Sky Express collapsed last year.

The Russian Government has also openly declared opposition to foreign development: Deputy Prime Minister Dmitry Rogozin told journalists that “our main objective is to push foreign aviation out of the domestic market” in August.

Ten days later, Aeroflot’s General Director, Vitaly Savelyev, met with President Putin to discuss the development of a national budget carrier. “The planes we buy are not cheap, and Aeroflot therefore cannot be a cheap airline,” said Savelyev, according to a transcript of the conversation on the Kremlin website. “The big issue now, as your instruction – which we are acting on – made clear, is to establish a national low-cost airline.” Savelyev said the new budget option could be launched in less than one year.

Loosening Aeroflot’s iron-clad grip on the domestic sector, however, comes with a number of strings attached. Savalyev stated that Russian Air Code and federal aviation laws must be changed so the airline could sell non-refundable tickets, and charge passengers for baggage and in-flight meals.

Savelyev didn’t name the airports he has in mind, but small regional hubs – such as Myachkovo, a small-aircraft port 31 km to the southeast, or Ramenskoye, an aircraft testing and cargo transport facility 40 km away – are possible choices.

The downside of cheap flights

The use of a less-accessible regional airport for Aeroflot’s budget option, while a commonality for low-cost companies, might still leave customers dissatisfied. European discount airlines are notorious for using misleadingly-named secondary airports hours away from the cities they claim to service. Paris-Vatry Disney Airport, for example, is located 147 km from central Paris, while Munich West is actually 110 km from Munich.

The extreme “no-frills” attitude of low-cost airlines is a turn-off to customers. “I’ll definitely pay extra for an airport that’s not a shed in a field a hundred miles away from the city,” Alexey Kovalev, a frequent flyer between London and Moscow, told The Moscow News. “I’ve flown on EasyJet and Ryanair on a number of occasions, but that’s an option I’d rather avoid. Cramped planes, overworked staff, airports in the middle of nowhere, extra charges for this and that – the list goes on and on.”

On a tight budget, low-cost flights come in handy, but the bottom line depends on convenience. Whether Russian or foreign, budget or premium, airlines compete ultimately for consumer satisfaction – a prize that is not always won by £125 tickets.