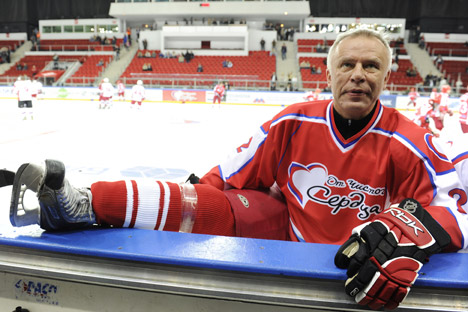 In an interview with Moskovskie Novosti, former head of the Russian Sport Committee and captain of the Soviet hockey team, Viacheslav Fetisov, explains how Russia could benefit from the NHL lockout, the advantages of playing at night and the most forward-thinking club in Russia.

Moskovskie Novosti: Is it true that we may soon see you back in high-level positions in Russian sports?

Viacheslav Fetisov: I don’t know. I think my present job supporting amateur and university sports is demanding enough. We plan to use hockey tournaments to drive home to the federal and regional authorities and corporate heads that grassroots sports merit special attention and that it cannot be swept under the rug. It is necessary to invest in infrastructure and in the creation of a system of amateur competitions.

MN: One of the tournaments that you organize is the Moscow “Night League.” Do you think it is right that people are forced to pursue their hobby at night because there are not enough ice arenas in the country, and, moreover, that they have to pay for the privilege as well?

V.F.: They do exactly the same thing in Canada and the United States. In our case, we help subsidize the cost of renting ice. Last season, we held a national tournament that brought 80 amateur teams together from across the country. As for misuse of rented ice rinks, we have to look into it on a case-by-case basis, and we are doing this. There are dodgy entrepreneurs and crooks in every country.

Of course, the authorities should keep an eye on this, because it is very serious and has far-reaching social implications. Playing sports changes people’s lives and their way of thinking. It keeps kids “off the streets.” Instead of spending money on vodka, many hockey amateurs opt for a healthy lifestyle, start saving money to buy skates and other gear. And there is a chance that their children and grandchildren will be sports enthusiasts as well.

MN: Where is the line between hockey that performs a social function and hockey that is a business?

V.F.: That’s a tricky question. To make money, you have to put a system in place. It would be hard to turn our hockey into a form of business before we agreed on common rules of behavior and identified the ultimate goal. At present, many Russian hockey clubs are eager not so much to earn money as they are to spend the money of their sponsors, most of whom are state-owned corporations.

Another important point is the fact that our league exists for the clubs and not vice versa. That is a strategic mistake. And then, of course, many players in Russia are paid more than they deserve. It’s just the way things are here.

MN: Do you think we should build our hockey business on the U.S. and Canadian models, or should Russia follow its own path?

V.F.: Let me put it this way: we can do better than North America if we assess the current situation correctly. But, to build a hockey business, we have to stick to certain principles.

MN: A major expense for KHL clubs this season is the salaries of NHL stars who have come here to play while the lockout continues. Is the NHL labor dispute a positive thing for Russian hockey?

V.F.: On the one hand, the stars who have come from North America have added a little spice to the KHL. Crowds are bigger and interest in the league is massive. On the other hand, we need to know if they are here to stay, or if they are just waiting out the lockout. Imagine if they all go back to North America before New Year. What will happen to the teams that are now building their game around NHL players? I would put the question in a different way: how can we benefit from the lockout situation?

V.F.: We have the chance to change the modern hockey world; it’s a once-in-a-century opportunity. If we manage to support the hockey players’ union financially and emotionally, it may tip the scales. As a result, we may force the NHL to respect the international calendar and defer to the international federation. We could then build up an equal relationship between the KHL and NHL and, perhaps, set up a global league down the line.

MN: Which KHL clubdo you consider to be the most forward-looking, not necessarily in terms of business, but at least in terms of its work with the fans?

V.F.: CKA Petersburg is doing a good job working with the fans. It’s a great atmosphere at their home games – a really pleasant experience. But, sadly, I don’t get the chance to go there often. The fans are very knowledgeable. Everything that happens on a peripheral level is of the highest quality.

MN: What are the chances that the NHL players will not be allowed to take part in the Sochi Olympics?

V.F.: That is, of course, one of the main issues in the negotiations. Club owners are losing money because of the lockout. Interrupting the season once again for the sake of the 2014 Olympiad means more losses. The longer the lockout lasts, the less likely the league is to allow its players to go to Sochi.

V.F.: I think it would be a stroke of luck for Russia. We don’t have that many players in the NHL right now – at least in comparison to the Canadian and U.S. national teams. If they come to Sochi with weakened sides, then our chances of winning gold will increase significantly; but we wouldn’t expect anything less from Bilyaletdinov’s [Russian national hockey] team anyway.

MN: We are currently trying to make our teams in many sports more competitive by hiring foreign coaches and naturalizing foreign athletes. What is your attitude toward this process?

V.F: I don’t think victories won by naturalized athletes will make our fans happy. This may be a way of “buying results,” of course. But this is difficult to do in the modern world: there are very few instances when naturalized athletes are treated as their own in their new country, where countries are proud of their victories. As for inviting foreign coaches, I see nothing wrong there. People in the whole world are learning from one another.

MN: You have been the head of the athletes’ committee of the World Anti-Doping Agency for many years. Will the Agency react in some way to the recent disqualification of the American cycling icon Lance Armstrong?

V.F: The Committee will meet in January and is sure to discuss the issue. This is all very sad. But, on the other hand, every athlete must know the potential consequences of violating anti-doping rules.

MN: Russia recently made the use of performance-enhancing drugs an administratively punishable offense. Would you be in favor of criminalizing such offenses?

V.F.: I would like those who draw young people into drug use to be regarded as criminals. As for athletes, they face severe punishment as it is. And, as Armstrong’s case has shown, it can catch up with them even after the end of their careers. This is a serious warning to all those who try to win by cheating.