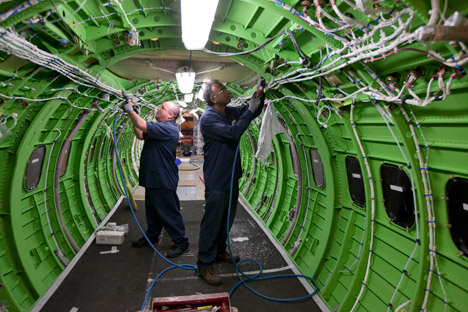 The Q-400 can carry up to 78 passengers for flights up to around 1,550 miles; the list price for the improved version of the aircraft is around $126 million. Source: Getty Images / Fotobank.

The first production facility in Russia to build Western aircraft may be set up at the Aviakor aircraft-assembly plant that forms part of billionaire Oleg Deripaska’s business empire.

Representatives of the Canadian company Bombardier recently discussed these plans with Russian officials from the Ministry of Industry and Trade. “We talked about producing Q-400 regional turboprop planes in Russia,” said Yuri Slyusar, the deputy minister of industry and trade. “We’re also discussing not only assembling the planes, but also manufacturing some components (for example, part of the wing) for Bombardier’s global market.”

The ministry is hoping to bring new technologies into Russian aircraft-building. Vnesheconombank could be able to help with financing the production, while the state is planning to support the technical refurbishment of Aviakor. This could result in around 20 new planes per year being produced for the market, explained the deputy minister, describing the logic of the project. “Q-400 planes built in Russia should have an advantage over those built in other countries. The customers for these planes will be Russian airlines,” Slyusar said.

The Q-400 can carry up to 78 passengers for flights up to around 1,550 miles; the list price for the improved version of the aircraft is around $126 million. Bombardier has built a total of more than 800 of these planes across all models. Russian Machines (which owns 61.97 percent of Aviakor) has not commented on the matter, but the corporation’s director of aviation business, Sergei Likharev, had said in early November that Aviakor was preparing to sign an agreement with Bombardier. However, according to Likharev, the contract is for finishing work on “green” Q-400 planes, not for assembling them. Vnesheconombank declined to comment.

The government’s interest in such projects is understandable: there’s an urgent need to revive the Russian regional transport market,” said Sergei Yermolayev, head of Bombardier’s office in Russia. “But, so far, we haven’t received any specific proposals.” In early October the President demanded that the Ministry of Transport and the Ministry of Industry and Trade “redouble their efforts to develop regional air transport.” To manage this, however, Russia needs planes – hundreds of aircraft over the next 20 years – and ageing equipment means that Russian transport operators’ fleets are being rapidly depleted, Yermolayev explained.

The Russian aviation industry has nothing to offer in exchange: the United Aircraft Corporation (UAC) makes medium-range jets that are not suitable for local regional lines, Slyusar stated. Aviakor itself tried to manufacture regional planes, but only managed to produce four planes using outmoded technologies, recounted the chief editor of avia.ru, Roman Gusarov. Aviakor used to be the most profitable aircraft-builder of the Soviet period, when it was producing the Tu-154.

Yermolayev admits that localizing production in Russia could be of interest to Bombardier in terms of optimizing costs. The company has experience with localizing production (in Mexico and China, for example), but the forms of cooperation were different. According to the deputy minister, the option being discussed for the Russian market is a joint venture with Bombardier. “The aim of our talks now is to make the project commercially successful, not just one that conforms to a political decision by the government,” said Slyusar, summing up the matter.