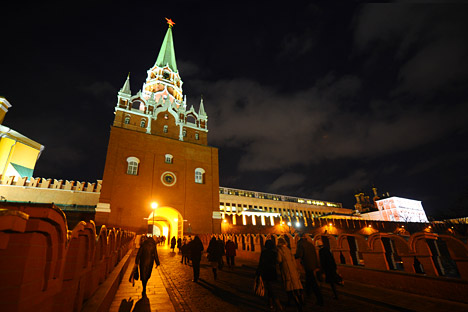 The public sacking of Russian Defence Minister Anatoly Serdyukov, a member of President Vladimir Putin’s inner circle, was an unprecedented outburst of turf war in the Kremlin, Russian analysts said.

But it is too early to say whether the power struggle among Putin’s allies is intensifying, or whether the minister’s fall will remain an isolated incident, said Mikhail Vinogradov, the chairman of the St. Petersburg Politics Fund, a think-tank.

Serdyukov is credited with launching ambitious reforms of Russia’s military, but his initiatives lacked direction and largely fell through, while corruption allegations gradually eroded his public image, experts said.

Putin cited the five ongoing criminal cases against Serdyukov’s subordinates as the reason for the snap reshuffle, which caught even Shoigu off-guard, as he admitted. A ministry-owned company is accused of sapping 3 billion roubles’ ($95 million) worth of the army’s money through real estate fraud.

Serdyukov, 50, was a furniture store manager in St. Petersburg, Putin’s home turf, for more than a decade. In 2000, he moved to the Federal Tax Service, becoming its head in 2004. He was appointed Defence Minister in 2007.

Putin’s team is made up mostly of old associates from his St. Petersburg times. Keeping them in office despite their professional shortcomings, as long as they display loyalty, was considered a staple of his staffing policy. This is why the very public sacking of Serdyukov – who is also married to the daughter to another Putin ally, ex-First Deputy Prime Minister Viktor Zubkov – was viewed by most analysts as humiliating and unusual.

The blow to Serdyukov’s reputation was softened by Prime Minister Dmitry Medvedev, who praised the outgoing official for being an “efficient minister” on Tuesday.

Serdyukov antagonised too many people in Putin’s inner circle, including his predecessor Sergei Ivanov, now head of the Kremlin staff, and Dmitry Rogozin, a Deputy Prime Minister in charge of the defence industry, said Anatoly Tsyganok, head of the Moscow-based Military Forecasting Centre.

A standoff with the defence and allied industries prompted an exasperated Serdyukov to begin purchasing arms abroad, an “unpatriotic” practice decried by many army officers and Rogozin, a firebrand nationalist. The stakes are high, because the government allocated 20 trillion roubles ($635 billion) for new military equipment through 2020.

Corruption allegations alone were not enough to cause the minister’s downfall because “the entire system is corrupt, starting from the very top” of the country’s leadership, said Anatoly Khramchikhin of the Institute of Political and Military Analysis.

Russia was ranked 143th out of 178 countries in the Corruption Perception Index by Transparency International last year. Corruption in the military was estimated at 3 billion roubles ($95 million) in 2011, according to the Military Prosecutor General’s Office.

Serdyukov’s PR campaigns presented him as an anti-corruption crusader parachuted in to crack down on rampant graft among the generals.

But his affiliates have rather rerouted corruption patterns for their own benefit, as the ongoing criminal cases indicate, alleges Alexander Perendzhiyev, a member of the Association of Military Political Scientists.

Serdyukov’s main task in office was army reform, accelerated after the 2008 war with Georgia, which shed a spotlight on the Russian military’s shortcomings, such as its lack of unmanned reconnaissance drones (UAVs), a staple of modern the modern combat theatre.

Serdyukov revised the chain of command and army structure, reformed the military education system and tried to tackle the army’s copious social problems, including the ubiquitous hazing of new recruits, low salaries and housing problems.

These radical reforms, along with the corruption allegations against a hand-picked staff comprising civilian specialists, many of them female, made Serdyukov a despised figure in the army, where many officers view him as an incompetent civilian. Perendzhiyev, a retired army officer, dismissed his team as “ladies with lapdogs.”

As for his reforms, they were a mixed bag, experts said.

Only the revisal of the command chain was successful, said Tsyganok. The education reform was botched, stripping the country of its “military intelligentsia,” while housing shortages remain as acute as ever, he said.

Russia’s new Defence Minister Shoigu will also likely have to cancel structural reforms of the army blindly based on foreign templates, said Perendzhiyev. He conceded the abuse of recruits has decreased, though it has not been eradicated, under Serdyukov.

Fellow analyst Khramchikhin was more ambivalent. “This radical reform gave highly controversial results, mainly because nobody – including its authors – seemed to grasp what its goals were,” he said.

“Only a war can show whether any of the innovations worked,” Khramchikhin said.