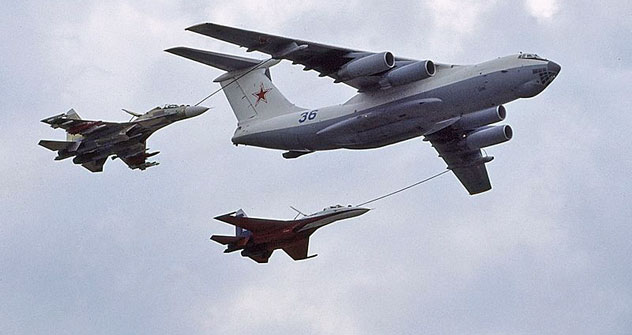 The Il-78 is used in many countries, and there have been no complaints so far. Source: Jim Newton

Russian companies continue to get outbid by American and European competitors in tenders for aircraft supplies to India.

The Russian Il-78MKI lost the tender for the supply of six aerial tankers worth $1 billion to India, which selected the European Airbus A330 as the preferred vendor, citing its lower operational costs. This is not the first Indian tender to be lost by Russian manufacturers in recent months.

The base price of the Russian Il-78 tanker was quoted as lower than that of the A330, but when factoring in maintenance and fuel costs, the A330 seemed to have better value, an Indian Ministry of Defence official said.

After America’s Boeing withdrew from the competition in 2010, it was a face-off between the Il-78 and the A330. EADS, Lockheed Martin and Ukrainian aircraft builder Antonov could have competed for the tender, but Antonov did not qualify and Lockheed Martin chose not to participate.

Tests of the Il-78MKI and A330MRTT were completed by India in early 2012. The country’s military has repeatedly complained about inconsistent deliveries of spare parts for the Il-78MKI.

The Indian Air Force is using six Il-78 mid-air refuelling systems and plans to buy 12 additional tankers, which includes the six from Airbus. Sources at the Indian Ministry of Defence said it has not yet been decided whether a fresh tender will be opened for the remaining six tankers or whether a repeat order will be given to Airbus.

The current tender is itself a rebid of a 2009 tender, in which the Il-78 competed against the A330. The European tanker was preferred then as well, but the country’s Finance Ministry blocked the deal, saying the A330 was too expensive.

The new A330 tankers will be deployed in Panagarh. In addition to lower fuel costs, the Airbus tanker is optimised for high-altitude flight and is equipped with advanced digital avionics.

This is not the first time that Russia has been outbid by its competitors in tenders for aircraft supplies to India. The MiG-35 fighter jet lost out in the tender to supply 126 combat aircraft, the Mi-28N failed to win the attack helicopter tender and the Mi-26T2 lost to the Boeing’s Chinook CH-47F in the tender for the delivery of 15 heavy lift helicopters. The Russian-made helicopters proved to be more expensive than those made in the US.

“India is making efforts to diversify its imports, placing large orders with various suppliers in order not to depend on a single country. And the previous contracts were good for Russia. India has been actively buying the upgraded Su-37, for example. Further, India plans to create a fifth-generation fighter together with Russia. We have also signed a number of contracts with India for the supply of Mi-17 helicopters,” says Igor Korotchenko, head of the Centre for Analysis of World Arms Trade.

The Il-78 is used in many countries, and there have been no complaints so far. “We are currently observing a growing demand for this airplane. Russia will be able to supply this machine to customers who bought our Sukhoi airplanes. Also, Russia may start supplying upgrades of its Il-476 refuelling system,” he said.

Its technical characteristics were not the main reason why the Indian military gave up on the Il-78, says Vadim Kozyulin, director of the Conventional Arms Programme at the Centre for Policy Studies in Russia. “Military and technical cooperation between Russia and India is going through a difficult phase,” he explains. “India’s political elite currently favours closer ties with the United States and the EU.”

“My estimate is that the Il-78 must be about 30 percent cheaper than the A330. The maintenance costs are roughly the same. When it comes to fuel costs, Russian planes are indeed less economical, but this has never been a problem for foreign Air Forces,” Kozyulin told Vzglyad.