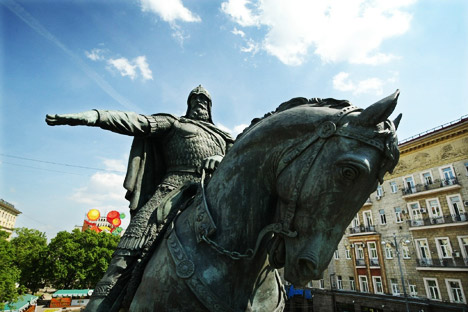 Russia suffers from the malaise of lost greatness. Source: ITAR-TASS

Greatness is an odd word because it signifies both quantity and quality. In the case of Russia, the two are easily confused.

Greatness is an odd word because it signifies both quantity and quality. In the case of Russia, the two are easily confused. Even after the huge territorial losses incurred with the Soviet collapse, Russia still accounts for one-seventh of the Earth's surface. Therefore, it has a geographical imperative to think big.

Russia is unlike Britain and France, which shrank back to their middle-sized home nations after losing their empires, making the transition to second-rateness with good grace. Russia's loss of empire was more sudden, destructive and humiliating. Russia suffers from the malaise of lost greatness, the gigantic hangover that results when a historical bender comes to its inevitable bad end.

What does the collapse of the Soviet Union really mean?

Both Britain and France were able to fashion post-imperial identities for themselves. This was facilitated for Britain by English becoming the lingua franca of the age, and by world pop culture figures like the Beatles and James Bond. Russian culture had never much transcended the country's own borders. Kvas never rivaled Pepsi as Soviet leader Nikita Khrushchev had hoped. The one great exception was Russian literature, where writers like Alexander Solzhenitsyn dwarfed most others in moral range, sweep and depth. But in post-Soviet Russia, literature no longer plays the crucial role it had played for some two centuries. In fact, Russia today proves disappointingly slack in the realm of painting, cinema and literature. That is partly the result of modern conditions, in which entertainment and technology are the dominant forces. But there are also specific Russian causes.

Post-Soviet Russia has been marked by three ongoing failures. First, democratic institutions have not evolved quickly and firmly enough. How much can even fair elections mean in any country where the media and the judiciary are controlled by the state? Still, political progress in Russia has been marked by two steps forward, 1 1/2 steps back, something that both foreign commentators and the domestic opposition tend to forget. Even the strength of President Vladimir Putin's repression since his inauguration in May show how seriously he takes the opposition, meaning that on some level Russia now has something like politics.

The second failure is not diversifying the country's economy sufficiently to protect against the eventual collapse that will result from an over-­reliance on gas and oil. Contrary to the government's expressed reprivatization plan, state-­controlledRosnefthas recently bought out TNK-BP, making it the largest oil company in the world in terms of reserves. Aided by foreign expertise and technology, the successful exploitation of the Arctic will buy Russia some time. Gas and oil are not, however, renewables, and one day the needle will point to E on the country's gauge.

The third failure is subtler and less obvious than the other two but may well be the more important because it allows the other two to proceed unobstructed. In the two decades since the Soviet implosion, Russia has failed to fashion a new identity for itself. It salutes a tsarist flag and sings a Soviet anthem with new words.

The failures in politics and economics mean that much of the populace does not see itself either as citizens or shareholders. Politics is viewed as a rigged game and though the rebirth of the economy has created a genuine middle class, there still is no sense of a normal, healthy economy with long-term prospects. It's all about taking the money and running — to Britain or the United States, if you can afford it.

Energizing the collective psyche probably requires a new vision of Russian greatness or a real sense of enemy. Of course, the two can go very nicely together in a mindset tinged by paranoia. This became abundantly clear on Oct. 20, when Putin officially established the Directorate for Social Projects, whose goal is to strengthen "the spiritual and moral foundations of Russian society" and stimulate "patriotic upbringing." Even the struggle for a new Russian identity has been infiltrated by foreign powers hostile to Russia's renewed greatness using nongovernmental organizations to sap the nation's strength. "Cultural identity and spiritual and moral values are the subject of intense competition, at times even of an open information war and well-orchestrated propaganda attacks," Putin said.

The Russian Orthodox Church may play a role in Russia's revival as it has in the past, but this will not come from any unsavory fusing of church and state, which most likely will result in a vicious, sanctimonious patriotism. One thing is certain: Russia's new identity, new values and new sense of patriotism and national mission will not grow out of bureaucratic initiatives like this new Directorate for Social Projects. This is natural fodder for satire, perfect for a post-Soviet Nikolai Gogol. Putin should have remembered his own example. It was the daring, dashing image of Soviet spies in the movies that motivated him to join the KGB. The Kremlin would be better off rebuilding its film industry, from which new role models could emerge for the country. (A hint of that possibility is visible in the excellent film "Elena.")

Richard Lourie is the author of "Sakharov: A Biography" and "The Autobiography of Joseph Stalin".