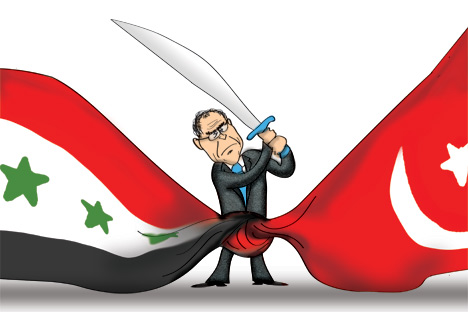 Russia has never had an easy relationship with Turkey. The ongoing scandal involving Turkey’s seizure of a Syrian plane carrying Russian cargo involves a number of issues, though the fact of the seizure is itself enough cause for consideration.

Following a short period of partnership in the 1920s and the 1930s, it has only been in recent decades that any tendency toward rapprochement in relations between Russia and Turkey has been observed. The first serious step was the signing of an agreement in 1997, concerning the Blue Stream gas pipeline. Today, as a result of the agreement’s implementation, Russian gas meets 70 percent of Turkey’s need.

In recent years, Turkey’s relationship with Russia has risen to the level of a strategic partnership. In 2008, Russia held first place in economic relations with Turkey – a position it now shares with Germany. This has obviously led to the strengthening of political and cultural ties between the two countries.

Thanks to the ruling party’s development and implementation of just foreign policies, Turkey’s policy of “not having any problems with our neighbors” has succeeded in strengthening relationships with Syria, Iran, Libya and other adjacent countries; but this strategy continued only until the moment of the Arab Spring. Ankara was forced to decide what kind of policy toward the revolutionary movements in the East it wanted to follow.

Lukyanov: Russian-Turkish relations to be tense

It should be understood that the political ideology of the Turkish administration can be described as a kind of Islamic liberalism – which is close to the slogans of Arab revolutionaries. Moreover, Turkey is an active member of NATO. The ruling party thus took the initiative to give its support, in one way or another, to the revolutions in the Arab world. What were the results?

Turkey did not give immediate support to the international operation against the Gaddafi regime. As a result of this, Turkey’s investments in Libya “folded” – the country sank into civil war, from which no quick recovery is likely. Hopes to bolster its political influence in Egypt and offer its own model of development have failed to come through: after the change of regime, it appeared that the Egyptian leadership was more inclined toward the developmental models suggested by Saudi Arabia and Qatar.

This is why Turkey decided not to miss a potential future pay-off when Bashar al-Assad’s opponents in Syria became active. Turkey immediately supported the opposition, believing that Assad’s time was done. But the situation in Syria turned into a stand-off: the president controls the major cities, but has been unable to put down the opposition; the revolutionaries are split internally, and cannot overthrow his rule. In theory, this situation could continue indefinitely, unless one of the parties receives some major support.

Betting on the opposition’s early victory, Turkey closed its border with Syria and is now suffering colossal economic losses. The Turkish media are reporting that approximately 400 million lira ($223.2 million) from the State budget has already been spent on refugee camps that house over 100,000 Syrian refugees. The flow of refugees is not waning, and it is anyone’s guess as to when the situation in Syria might return to normal.

Along with this, the Kurdistan Workers Party has significantly strengthened its position in Northern Syria. This poses a renewed threat to Turkey, in the shape of Kurdish instability. The combination of all these problems is forcing the Turkish government to seek a desperate exit from the situation.

The first suggestion that comes to mind is hastening the fall of Bashar al-Assad’s regime. This is what led Turkey to request assistance from NATO and, strangely enough, to seize the aforementioned Russian aircraft. However, Turkey’s partners in NATO are in no hurry to dispatch armed forces as they did in Libya, because Russia and China continue to support Syria. This leaves Turkey in a difficult position.

The relationship between Russia and Turkey is now extremely complicated. There are, on both sides, a large number of opponents to the strategic alliance between Ankara and Moscow. Within Turkey, this primarily involves radicals who are striving for the disintegration of the Russian Federation, and who gained a lot of popularity against the background of the Arab Spring. If their political influence continues to strengthen, it will have a catastrophic result on relations between the two countries.

If our interest lies in the development of Russo-Turkish relations, we must take heed and consider how the situation can be quelled. There are a number of different methods for doing this (especially since Turkey, I believe, certainly wishes to improve relations). Great economic foundations have been established over recent years – foundations upon which even greater relations can be built in the future. Moreover, a large number of business leaders will not come to the support of the ruling party if the party moves toward the worsening of relations with Russia.

Aleksandr Sotnichenko is a political analyst and Dean of the Faculty of International Relations at Saint Petersburg State University.

The full version of this article was first published in Russian in Vzglyad.