How to make multiculturalism work in Russia

The Voice of Russia
Yulia Zamanskaya 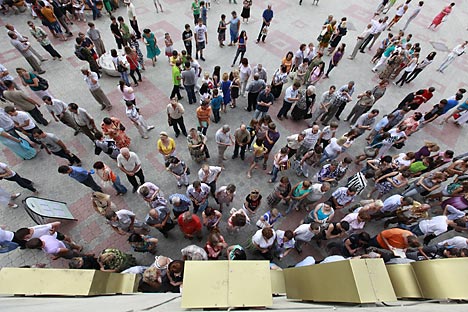 If the reasons behind the failure of integration of immigrants are properly understood and acted upon, the dream of multicultural Russia might indeed come true.

The ‘ethnic question’ in Russia becomes particularly significant as migrants from former Soviet republics fail to integrate, and xenophobic sentiment is gaining its popularity among the native Russians. However, politicians and academics are starting to take necessary measures, and Vladimir Putin’s proposed programme is likely to lead to higher levels of integration among migrants in order for Russia to be successful in building a multicultural society.

In essence, the policy of multiculturalism is rooted in the idea that if a country makes immigrants feel welcome by allowing them to retain their culture and traditions and by addressing various forms of discrimination against them, immigrants will reciprocate by embracing the national identity of the host society and the values needed for a stable society.

Thus, to a great extent, multiculturalism is a product of cultural relativism – a claim that no particular value system is superior and, therefore, it cannot trump the worldview of others. While this seems to be rather convincing and imply no discontent, recent reports indicate that, by far, Russia has been largely unsuccessful in its attempts to implement the policy. However, if the reasons behind the failure are properly understood and acted upon, the dream of multicultural Russia might indeed come true.

Recent developments show that confidence in multicultural society is weakened by the feeling that immigrants not only lack any intention to integrate but are also becoming increasingly hostile towards the ‘native’ population of the Russia. In this respect, Vladimir Putin suggested in March that in its current form, Russian multiculturalism “elevates the idea of the ‘right of minorities to be different’ to the absolute and, at the same time, insufficiently balances this right with civil, behavioural and cultural obligations in regard to the indigenous population and society as a whole.” What such form of multiculturalism is leading to in Russia, according to the President, is the formation of “closed national and religious communities which not only refuse to assimilate, but do not even adapt." In his pre-election article, Putin also expressed his astonishment that “neighbourhoods and entire cities where generations of immigrants are living on welfare do not speak the language of the host country."

Frederica Prina of the Univeristy College London suggests that every so often, migrants have great difficulties in integration due to the lack of courses that might enable migrants to learn about Russian national identity and culture. In this respect, it seems that integration is well-intentioned but should be better implemented.

Addressing such concerns, Vladimir Putin called for stricter laws on migrants. While Mr Putin’s proposal for tougher laws that would require migrants to register with the authorities and pass exams in Russian language, history, and literature, is often criticised, such a programme might in fact facilitate integration of migrants into Russian society.

Prospectively, migrants would have to attend special courses that would help them not only to better understand Russian culture and traditions, but also teach them how to protect their rights, identify appropriate job opportunities, and send remittances home. The programme will also enable migrants to obtain information about working and living standards in Russia. In this respect, Putin’s proposed programme is likely to lead to higher levels of integration among migrants as well as greater understanding between migrants and Russian natives.

Another challenge that Russia is currently facing with its policy of multiculturalism is a particular form of xenophobia that developed among indigenous Russians as they sought to protect their values and interests from the newly emerging foreign competitors. While xenophobic claims seem to be rather tempting to believe in, they often lack objective foundation. Indeed, according to the East West Information service, xenophobic sentiments are largely based on the myths rather that a cold minded analysis of the situation in the country.

One of the main reasons for xenophobia is a presumed competition between Russian natives and migrants within the labour market. However, at the moment, almost 80 percent of labour migrants in the Russian Federation do not even have a high-school diploma and hardly speak any Russian. Therefore, migrant workers have considerably fewer opportunities Russia, where literacy rate among the native population reaches nearly 99.4 percent and 78 percent graduated from the university.

In this respect, having arrived to Russia at random, without skills, and without knowing the language, the migrants can only get low-paid jobs. In addition, migrant workers who come on their own without any employment contract are highly limited in their rights. In this sense, it seems that ‘labour market xenophobia’ among the native Russians is lacking any substantive foundation.

Similarly, xenophobic claims regarding higher crime rates among migrant population seem to be drastically exaggerated. In this respect, xenophobia seems to be a reflection of basic psychological aversion toward the ‘Others’ – people of different nationality, culture, or religion – rather than an objectively founded claim.

Trying to avert xenophobic trend, the new reform of education proposed by the government will tackle the problem of Russians’ “intolerance toward difference” through the introduction of new subjects in schools, such as religious studies and secular ethics, which will teach the younger generation of Russians about diversity and inter-cultural dialectics.

All in all, while at the moment Russian multiculturalism is undoubtedly not in the best place, the policy has every chance to succeed with renewed governmental attempts to create a sense of belonging among migrants on the one hand, and to tackle xenophobic sentiment among the natives on the other.