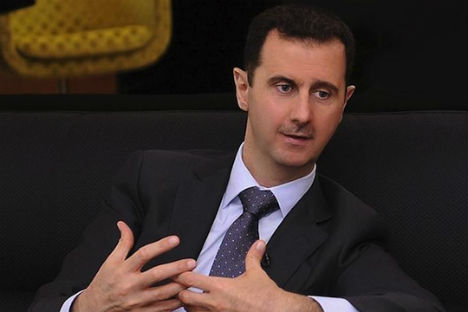 Bashar Assad, is a well-educated man who has fallen victim to media demonization. Source: Reuters/Vostock photo

The Syrian conflict is exponentially more complicated than portrayed in the press and Bashar Assad, is a well-educated man who has fallen victim to media demonization, says RT’s Sophie Shevardnadze, who recently met and interviewed the Syrian leader.

RT:  You were there, just returned. First of all, he is painted as such an evil, evil man really in the situation, so clean-cut really. What was your impression, first of all?

Sophie Shevardnadze:  Of the man, or the situation?

RT: Both. Of the man – is he really who most of the media says he is? And then, of the country, the people.

SS: The first thing that really marked me is that everything is so much more complicated than people portray it to be in the press. In any press, actually. And I will overemphasize that over and over again – it’s way too complicated. As far as Assad goes, I had a chance to talk to him 15 minutes before the interview, and he is completely demonized by the press, because he is a very educated man, he is a very pleasant man. He doesn’t seem to have, you know, this sickness of being a president and everything else. He is a very down-to-earth guy.

The thing that really marked me most is how really much more complicated the situation inside Syria is from what we see in the media, because I talked to people… yes, the country is divided, and even the people who didn’t like Assad before this conflict started are now so scared that fundamentalists will come to power – fundamentalists who are fighting on the side of the Free Syrian Army. And the Syrian people are not about that. And this is like the only secular Arab country that had a lot of different religious groups always living in peace with each other, whether it’s Sunni, or Shia, or Alawis, or Christians – and they’re really scared that if Assad goes, the army will fall apart and then, you know, you’d have these extremist Muslims coming to them and asking them to basically be just like them. And we actually saw a Twitter for the Free Syrian army, and they had the targets, the people that they want to target to kill… Basically, they’re targeting also famous people who don’t want fundamentalists in power. So it’s not just about Assad – I think people feel, whether he goes or stays, it all it can get worse if he goes because it will get… I mean, the terror attacks will continue and the fundamentalists will come to power, so they’re very scared of that.

RT: Did you feel like you were – I assume you took the interview in the presidential palace – that you were in the place of the man who is losing power?

SS: No. Once you are in the palace, you don’t really see that. But once you go outside the palace, you obviously see that things are pretty bad, and once, we thought there’s a situation starting to escalate even more, because there were terrorist attacks, let’s say, once every two weeks or once a month in Damascus. Then, we had like two or three terrorist attacks each day, that they were there in the center of the city. And you could just hear the bombings, I mean the rebels and the government forces fighting each other in Damascus suburbs day and night. I would wake up at seven and eight in the morning. Especially for someone who is not a war reporter – I am not used to hearing bombs and falling asleep to the sound of bombs. That really marked me. But people there are used to it, and life goes on – and that really struck me. I think what struck me the most is that there's no way out for the people there. They are in a dead-end situation.

When you walk in those streets, it doesn’t really faze you that you could be targeted or die in a terrorist attack, because that really sort of puts you in a state of cognitive dissonance – because from one hand life goes on, because people really have no choice. I mean, they have nowhere to go, no one gives them visas. Even if they wanted to go, they couldn’t.

Just like Assad, by the way. Even if he wanted to step down, I don’t think he could go anywhere. And we asked that in the intros, like, 'do you even have a choice? People are calling you to step down.' Where would he go? No country would even accept him, I don’t think. Maybe Iran – but that’s about it.

SS: The fact is that he has no choice, and he’s made it very clear – even before the interview when we spoke, he told me, “I never wanted to be the president. I became the president of this country when I was 34 years old." I think his whole life and time as president went by without him having a choice pretty much. And now at this point he was like it’s almost as if he has cancer – so either you beat cancer, or you die of it. I can just tell you that his family is in Damascus. His kids are like 9, 6 and 7. They go to a local school in Damascus. So, he is making a point, not pulling his family members out of Damascus as well. And he told me, you know, I’m a young man, and I love sports, I love wife, I could have just picked up and left like Ben Ali did, for example. This is no Gaddafi.

RT: I want to take a moment to listen to a piece of that interview Sophie did with the Syrian president.

SS: I just wanted to say really quickly, that there were talks, because I obviously spoke to people that weren’t just working in the president's administration, but people in the streets and I went to the market and bought some abayas. I asked them about Assad, and they told me that he probably wanted to leave a couple of times. The people around him wouldn’t let him go, because for the Christian minority and for the Arabic minority there will be just crucifixion, you know, because people would just kill them or completely destroy them even if he wanted to go. And so he couldn’t go even if he wanted to leave.

RT: What about the actual interview? It’s airing  on RT throughout the weekend. For a journalist, you know, you’ve interviewed lots of high-ranking officials – there’s always a sort of protocol – they ask you some questions before. How much did he know about what you were going to ask him? How rigid was that?

SS: It was very rigid in terms of when we went there – first we saw his press secretary, who is our age – she is probably 35, she is an ex-Al Jazeera presenter. She knows the television staff very well. She knows what she’s talking about, she has hands on, she is very protective of Assad. So, the first thing she gave us was a contract, which we had to sign. And this contract is actually after the Barbara Welters interview, because she was the first one to interview him. She went there and they gave her complete freedom, complete access to Assad, absolutely no obstacles. And she recorded I think an hour or something with him and then she edited it in a way that was completely distorting of the president. So, they got very scared after that. They had to print a contract for everyone who goes there. And we had to sign it as well. So, some of the points in the contract were negotiable – for example, one of the points said that you have to give us the questions you were going to ask the president, and you can not ask the president more or less. So, I told her, like, listen – there’s nothing I can possibly ask him, that he can not answer. And I can only ask questions  and he can only give me answers, because he obviously knows much more that was going on than me. We gave them the main things, he didn’t know the actual questions. Another point was that we could have an hour with him, but in that case we need to sit down with the press secretary and edit down to the exact time we were going to put on air. So, we preferred to have 26 minutes sharp and cut that unedited, than have the interview edited with the press secretary. So, we just didn’t have time to ask everything we wanted to ask. But we did our best in those conditions.

RT:  Very, very briefly. Do you think he is going to make it through this?

RT: All right. Sophie Shevardnadze, thank you very much.