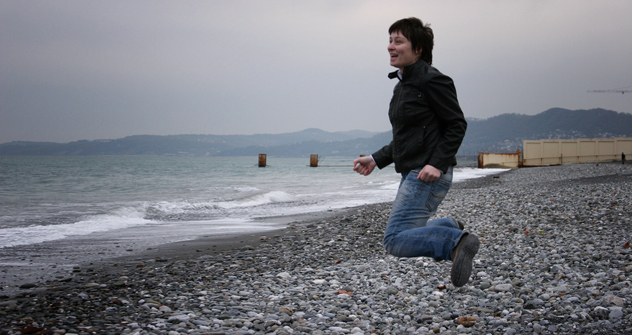 Sochi town in Southern Russia on the Black Sea coast has a mild sub-tropical climate and is more or less pleasant all-year round. Source: Lubov Zelenskaya

November can be a gloomy and particularly miserable month in Moscow, but being off-season, ticket and hotel prices fall across the country and many places still offer a lot for those lacking inspiration.

It’s easy to look at a clock in Moscow these days that shows the time as 8:00 and wonder whether it’s eight in the morning or eight at night. With the sun rising at 8:55, it’s easy to lose one’s sense of time. The last of the red and yellow autumn leaves are falling off the trees and there’s the ‘in-between’ weather with the cold winds and a mix of rain and snow.  Add to all this, the fact that the New Year break seems agonisingly far away, and you have a recipe for depression in the Russian capital.  Here are a few places in the country that may not be warmer but still have enough to lift the spirits.

Agreed, the Northern capital can be colder and greyer than Moscow in November, but this is the right excuse to visit the museums and galleries that you wouldn’t want to visit during the warmer months when it’s beautiful outdoors. Take your time to see the more than 3 million art exhibits on display at the Hermitage, easily one of the greatest museums on earth. This is the best time to appreciate the Winter Palace and the other buildings that are partially open to the public.

Siberia may have been the dreaded prison destination for the worst criminals of Czarist Russia, but times have changed and it’s now vogue to show off about a trip to the region. Irkutsk, once called the Paris of Siberia, is full of architectural treasures that look all the better when laced with the early snow of the winter.

Lake Baikal is also beautiful at this time and there’s a certain degree of serenity in the same places that are noisy and full of tourists in the summer. The world’s largest source of fresh water is close to freezing point but still inviting for a daredevil who wants to take a dip.

Irkutsk and Baikal are cold but not at their freezing worst in November. This is a good time to get a feel of the Siberian Winter without experiencing the worst of it, which comes close to the Winter Solstice.

For those unfamiliar with the host of the 2014 Winter Olympics, Sochi is no Aspen. The resort-town in Southern Russia on the Black Sea coast, close to the Caucasus Mountains, has a mild sub-tropical climate and is more or less pleasant all-year round.

Being one of the few places in the country that is relatively warm and sunny even in November, it’s quite likely you’ll get 20-degree Celsius days and have long stretches of beaches to yourself as the tourist hordes would have abandoned the city by now. Chances of getting hypothermia from swimming in the Black Sea are definitely less than they are from swimming in Baikal.

There is a wonderful set of neo-classical buildings on the coastline and opulent spas that remain open for most of the year.

In a region known for extremely cold winters, Khabarovsk is one of the most beautiful cities in the country. Its Mediterranean aura vanishes by November but it’s still a place worth visiting before the brutal winter. Watch in marvel as the top layers of the Amur freeze over as the river heads north to the Sea of Okhotsk creating ice floes.

Khabarovsk has a buzzing cultural scene and is a major centre for the art and the culture of the Indigenous People of the Russian Far East. It’s also a nice city for socialising and having a good time. The large student population keeps the city alive and ticking in the colder months and a good party is never too far away.